Virtually all marine aquaria have fish residing in them. And fish must be fed. Which is fine, because most hobbyists enjoy feeding their animals and do so quite generously. The result, however, is a whole lot of fish waste. These waste products are mineralized (that is, broken down) through biological processes into simple compounds such as nitrate and phosphate. In recirculating systems, these substances can rapidly accumulate. They are often referred to as nutrients because they are required in significant quantities for plant (e.g. algae) growth and reproduction. Hence, heavy blooms of nuisance algae can occur where nutrient levels are high. In a marine aquarium, this might mean tinted water and/or films that cover the rocks, sand and tank panels. No matter which way these plagues present themselves, they are a huge source of frustration for aquarists everywhere. In fact, much of the time and money spent on the typical  saltwater tank is aimed primarily at controlling (if not defeating) unwanted algal invaders.

To this end, some aquarists carry out messy and time-consuming water changes on a massive scale. Others employ expensive chemical media in expensive chemical media reactors. Increasingly, many others are using algae to fight algae. Typically, this involves cultivating a sizable standing crop of a macroalgae such as sea lettuce in a separate enclosure, usually referred to as a refugium. In theory, the macroalgae assimilate nutrients that they draw from the aquarium system water as they grow. These nutrients are merely locked up in the plant biomass, and are only exported from the system when portions of the crop is harvested and discarded. In some cases, they may be recycled if the refugium plants are periodically used to feed herbivores in the main tank.

Really, there are a handful of reasons why one might add a refugium to their aquariu 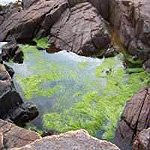 m system. The goal might be to create a “refuge” for copepods or just to keep a nice collection of attractive ornamental algae species to display. Some have joked that a refugium is simply an excuse to set up another tank (while explaining to the significant other that it is actually a special filter component). But if the primary goal of setting up a refugium is to reduce loads of dissolved nutrients in the aquarium water, the best choice is a hardy, fast-growing macroalgal species that not only tolerates, but indeed loves, polluted environments. For this job, sea lettuce is a prime candidate.

The common name sea lettuce generally refers to certain chlorophytes (green seaweeds) of the genus Ulva. The type species for the genus, U. lactuca, is found in shallow ocean waters nearly worldwide (the Americas, Northern Europe, Indian Ocean, China, New Zealand and beyond). Ulva seems to prefer nutrient-rich waters in shallow, brightly lit, partly enclosed shores such as in bays, estuaries or salt marshes. It can sometimes be found in great densities, forming a low-growing meadow over stony sea bottoms. It is particularly abundant where there are elevated concentrations of dissolved nutrients. Even when nutrient levels rise far above any natural level (as seen in some bays in Britain, where coastal waters have been heavily polluted by fertilizer run-off), this hungry seaweed thrives. In fact, the only thing that checks this weed’s growth in many areas is sea urchin grazing; lush meadows of sea lettuce form where sea urchins have been removed.

Ulva spp. really do resemble little, crinkly lettuce leaves. Its fronds take the form of broad blades that are often lightly shredded and have small holes. Like other seaweeds, it lacks true roots and attaches to hard surfaces by means of a disc-shaped (no stipe) holdfast. Simple and mostly flattened, the holdfast looks much like the plant’s fronds. In quieter tide pools, detached sections can grow to form fragile sheets several feet or more in length. Its fronds are bright green due to a high content of chlorophyll a. It is this, and their production of starch, that leads some botanists to propose that these are some of the closest seaweed relatives to land plants.

Highly palatable and nutritious, sea lettuce is important in the diet of many species (including some humans); even deer have been observed grazing on the stuff. It also is important as a biogenic habitat on which a diversity of other tiny organisms including bacteria, copepods and even other algae may dwell. There are even some interesting (but still poorly understood) relationships between certain marine fungi and Ulva. In this case, the fungi Guignardia sp. and sea lettuce form a “composite,” with the fungus being most evident as a wart-like growth around the plant’s thallus. It also appears that Ulva requires particular mysterious “growth substances” (derived from the secretions of benthic bacteria) to properly develop. 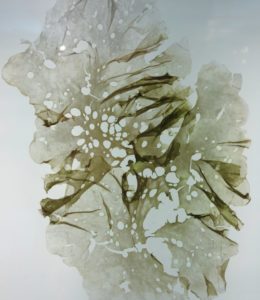 Members of the genus Ulva have a life history that involves both haploid sporophyte and diploid gametophyte stages. While these plants can undergo a rather complex pattern of sexual reproduction, they are also capable of proliferating asexually by means of blade fragments that reattach on new rock surfaces or by expansion of the holdfast. Growth can be fast where the right conditions (namely nutrient-rich waters, intense, full-spectrum illumination and moderate water movement) are provided. Their ease of cultivation and aggressive uptake of pollutants has made them extremely popular in the aquarium hobby. While there is some element of seasonality in their productivity in the wild, they appear to be fully able to grow without pause in a stable captive environment. It grows well (and also looks rather good) when kept with certain other structurally complementary macroalgae such as Chaetomorpha spp. And, it of course makes for an extremely high-quality live feed for herbivorous fishes (many tangs, angelfishes, rabbitfishes, etc.).

While it is not quite as attractive as algae such as Gracilaria, Ulva is the first choice for many aquarists who are serious about using a refugium for nutrient control. And, unlike other fast-growing nutrient sponges like Chaetomorpha, it can be offered as a nutritious treat for the tank’s algae-eating inhabitants. Nevertheless, when grown in mixed beds with Chaetomorpha, it creates a perfect environment for the long-term culture of beneficial microcrustaceans. It’s no wonder that so many aquarium hobbyists regard sea lettuce as a super seaweed.