You are here: Home / Refugium Education / 5 Fish for the Refugium

For a lot of people, a refugium is an opportunity to keep an “extra” tank. This doesn’t necessarily mean more of the same; in fact, the refugium typically houses stuff that you cannot keep in the “main” tank, like Refugium Fish. Generally, this consists of macroalgae. The idea is that in the refugium, macros (1) can be maintained in lighting, water flow, etc. that promotes highest growth rates, (2) cannot outcompete and overgrow corals in the main tank and (2) cannot be eaten by large herbivores such as tangs, sea urchins, etc. The result is a lush algal bed that efficiently removes excess nutrients from the water and provides lots of prime microhabitat for small pods.

This model has worked so well for countless marine aquarists that is has become integral to the conventional reef aquarium system. Nary are other critters added to refugia for fear of disrupting this fundamental function. And that’s for good reason–the wrong animal (either fish or invert) can easily disrupt the balance of a planted refugium. For example, it could eat all of the macros, or all of the pods.

A well-suited refugium fish can’t be an herbivore. Nor can it be a zooplanktivore. So, then it must be a carnivore! (Okay, sure, a species that only eats sponge or coral could work for this too; but since the diet of such a species is so demanding, we’ll assume here that you’re not interested in attempting to keep it.) What’s great about this is that it allows many desirable predators to be kept in the system, even if they are a no-no for the main tank.

There’s just one more consideration: The swimming room. A lot of carnivores reach fairly big adult sizes. This is a potential issue, as refugia tend to be smaller (and more cramped) compared to the main tank. This means that a refugium fish selection is further limited to relatively inactive species. So no wrasses, triggers, etc.!

1. Dwarf lionfish (Dendrochirus spp.). These normally cannot be kept in the usual reef tank for the reason that will eat small fish or shrimp (even so-called cleaner species). However, they are entirely safe to keep with macros or pods. These ambush predators do prefer a rocky perch to sit atop of, but aside from that, they require no special refugium fish renovation. Be extra careful to keep track of their whereabouts when working in densely planted refugia, as their sting is exceedingly unpleasant to experience.

2. Anglerfish (Order Lophiiformes, mainly from Suborder Antennarioidei). Even more so than the lionfishes, anglers are lie-in-wait hunters. Thus, a smaller tank size actually facilitates feeding by concentrating prey near the predator’s jaws. While most angler species will (like the lions) appreciate a rocky structure to cling to, some species (e.g. the sargassum anglerfish) won’t mind climbing around through the algal mass.

3. Golden dwarf moray eel (Gymnothorax melatemus). Aside from it’s pretty blue eyes, the golden dwarf moray (with a pale pink-yellow boby) is not a particularly spectacular addition to the reef tank. Yet, this ghostly colored creature is strikingly attractive when slithering through the shadows of a thick patch of seaweed. The fact that they seldom exceed a foot long in captivity make them even more desirable (compared to other morays) for use in the ‘fuge. This animal needs no more than an appropriately sized cave to be content; this may be supplied easily with a section of PVC pipe. However, a very tightly fitted lid is a must in order to keep this (or any) eel from escaping. 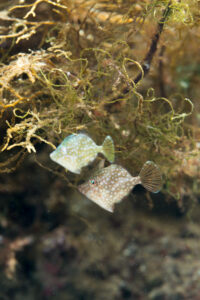 4. Hawkfishes (Family Cirrhitidae). Everyone loves hawkfishes. They’re hardy, easy to feed and almost never succumb to disease. Indeed, these small predators are successfully kept in many reef tanks on one condition: It contains no shrimp. On the other hand, if you love shrimp, you’re out of luck in terms of keeping hawks in the main tank. Still, they make surprisingly great refugium fish. Unlike a lot of small reef fish, they have zero interest in copepods. And, if they have a tall, rocky perch, they are content to sit in one small area. The predominantly reddish coloration of species such as the longnose hawk, flame hawk, arc-eye hawk and spotted hawk pop beautifully against the green backdrop of a mass of chaeto or sea lettuce.

5. Whitespotted pygmy filefish (Rudarius ercodes). While it is incredibly cute and interesting, the whitespotted pygmy file’s habit of munching on coral polyps makes it a horrible choice for the reef tank. However, because it naturally occurs in seagrass and seaweed beds, it is a great choice for the planted refugium. At just a few inches length at adult size, it can be used in a refugium as small as just 10 or 15 gallons in volume (assuming it isn’t jam-packed with macro). One more nice attribute of this species–it’s available as captive bred!