You are here: Home / Product Info / Why Larval Pods are Better for Seeding (Even If You Can’t See Them)

Copepods (pods) are essentially required for any reef aquarium. They perform three important ecological tasks: (1) Graze on benthic microalgae, (2) scavenge detritus, and (3) serve as food for diverse zooplanktivores. They are so ubiquitous in nature, and even in captivity, that they commonly invade new tanks as hitchhikers on live rock, corals, etc.

While this hitchhiking is very much welcome by most hobbyists, it is not always followed by an establishment of residency. This is due to heavy predation by fish and corals. This predation too is welcome, as it is completely natural and copepods are a very, very nutritious food. However, it can make the process of establishing permanent populations (referred to as “seeding”) somewhat challenging in some situations. 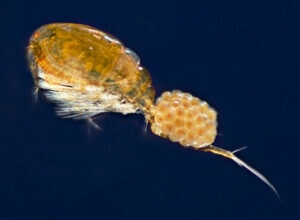 Pods are super tough, adaptable creatures. So long as they have plenty of food (e.g. phytoplankton), the only thing stopping them from reaching incredibly dense population densities is their predators. Aside from providing a remote hiding place (i.e. refugium), much of this is out of your hands. Sure, you can add them directly to the ‘fuge… You can add them at night under the cover of darkness… But you must assume that much of your seed stock will be eaten before it has a chance to reproduce.

Now, again, it’s great for your SPS corals, your mandarin, etc. to get a nice wholesome live meal right off. You can’t blame your animals for doing what best helps them survive. However, this defeats the purpose of seeding.

Feeding and seeding are two distinctly different objectives. Feed pods are simply meant to be consumed immediately and are not expected to live for long. Seed pods, to the contrary, are meant not only to live a while but live long enough to produce progeny that produces progeny…

Let’s compare the two. Yes, they are only separated by degree. That is, some feed pods might escape predation for long enough to reproduce. And of course, some seed pods will get eaten right away. But if you really want the pods to get eaten (say, for example, because you have an extremely hungry mandarin in a podless tank), then by all means use feed pods. But if you’re truly trying to build a lasting, constantly available, self-replenishing supply of live food, then you should add seed pods.

By now you’re probably wondering, “so what’s the difference?” That’s easy. Seed pods are comparatively younger and smaller. Their youth and small size give them a few distinct advantages when seeding, actually. Specifically, they (1) more easily escape predation, (2) have longer to live/breed and (3) can be packaged in significantly higher numbers. Let us examine each of these points in more detail.

Sure, copepod larvae (as well as adults) might get snared and eaten by corals. But it is the larval pods that escape their major predator–small fishes. Ever see a little goby, six-line wrasse, or some other reef fish demolishing pods on the glass, one after the other? Then you get this point well enough. Only the microscopic larvae escape these fishes’ notice. The big ones? They end up becoming very, very expensive fish food. Better to use seed (larval) pods and reap a big, endless bounty in just a few short weeks down the road. If your more finicky zooplanktivorous fish are starving, get them a couple of jars or nutritious, freshly hatched brine shrimp (e.g. Nano Brine) instead.

They grow up so fast

Another reason larval pods are better for seeding is the fact that they have longer to live, which means more opportunity to generate brood. Hell, some big adults are already at the end of the road by the time you obtain them. For seeding, what’s the point of that? You’re dealing with an animal that reaches reproductive age in as little as a couple of weeks anyway–so why buy old pods? Research shows that male mating capacity and female fertility deteriorate rapidly with age in some, if not all, copepod species. First of all, while their reproductive life span is scarcely much more than a week, males generally can fertilize only one female per day. The rapid age-dependent decline in female fecundity and limited mating opportunity of males leads to very picky males. Indeed, experiments demonstrate that males strongly prefer newly fertile females over elderly females (young females are three times more fertile than 30-day-old females). This appears to provoke intense competition among males for virgin females which leads to considerable investment in mate finding. Why make their job so difficult during the critical time of seeding? 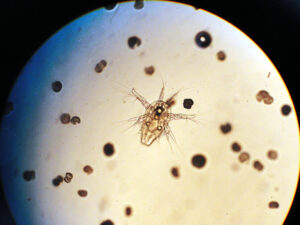 Finally, a population size consists of numbers of individuals, not the average size of individuals. So, when trying to build a big population of pods, you want to add the greatest number of pods possible, right (duh)? Well, get this–you can’t pack as many huge, old pods into a 16 oz. jar as you can smaller, young pods. Yeah, we get it–you want to see what you’re buying. Totally understandable! Even a relatively small number of individuals looks impressive as huge adults when crammed into a little jar. But would you rather seed with a few hundred haggard old pods or a few thousand fresh ones?

While some pod producers might sieve out the young (most valuable) pods to keep for themselves and only sell the old ones (good practice for them from a production standpoint), AlgaeBarn sells pods of all life stages–from newly hatched nauplius to adult. Indeed, the population age structure you receive in a bottle of EcoPods, for example, is representative of what you’ll find in a natural, established, growing culture. No missing life stages=no lag times during the seeding period in a new system. And a better chance of successful seeding! That’s right, even though you can’t see them, juvenile pods are way better for seeding any tank!