You are here: Home / Beginners Education / Understanding the Nitrogen Cycle

We are finally starting to see a surge of interest in the nitrogen cycle &  the “aquarium microbiome.” That is a very, very good thing, not just because understanding the microbial workings of our captive ecosystems is critical to our success as aquarists, but also because we remain woefully uninformed about (even unaware of) the enormous diversity of 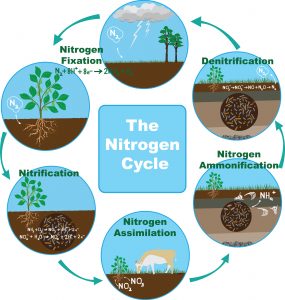 microbial lifeforms and the complexity of natural nutrient cycles.

While this article will indeed focus on the nitrogen cycle, and will indeed discuss nitrifiers, it will reveal that nitrogen “transformations” (in both natural and healthy captive environments) are connected to other nutrient cycles and involve many types of microorganisms.

Breaking it down – The Nitrogen Cycle

Nitrogen is an element and therefore cannot be created nor destroyed. On Earth, it mainly exists as a compound (N2) wherein two nitrogen atoms are bound to each other. However, in biological systems, it is incorporated into biomass and used to various energy exchanges. These transformations include back-and-forth conversion into various organic and inorganic compounds. For example, once it is “fixed” and converted to ammonia (NH4), it can be taken up by “primary producers” and used to make amino acids which used to make proteins. In general, the nitrogen cycle has five steps:

All of this suggests that ammonia isn’t necessarily bad; in truth, without it, life on Earth would come to a screeching halt. However, because it is toxic to animals (and even some plants and microbes) at certain levels, aquarists must take steps to ensure that it is cycled properly. That is, it must be present, but in a certain small amount.

Particularly if one is attempting to replicate a coral reef environment, and they keep fish (and therefore a constant input of fixed nitrogen via fish food), maintaining the minimal amount of ammonia will be easy. For some aquarist (i.e. those that have lots of fish and love to feed them), this is too easy. The result often is a toxic accumulation of ammonia.

This means that aquarists are accustomed to believing that ammonia is inherently bad. It’s not. What matters most is how much ammonia is present and where it’s at. But more about that in a minute… For now, let’s briefly discuss each of the five major transformations.

Nitrogen fixation is a chemical processes through which atmospheric nitrogen is assimilated into organic compounds as part of the nitrogen cycle. While some fixation occurs through purely nonbiological processes, most is carried out biologically through certain microbes known as diazotrophs. Because this process requires enzymes known as nitrogenases, and relatively few organisms possess these enzymes (which function only under anaerobic conditions), diazotrophy is limited in most ecosystems.

Coral reefs are a bit of an exception to this. This is because nitrogen-fixing bacteria form symbiotic relationships with zooxanthellate corals. In fact, in the last decade, research has revealed that it is diazotrophy that enables reefs to be so productive in such nutrient-poor water. Specifically, diazotrophs such as Rhodopseudomonas palustris live inside corals and provide fixed nitrogen to the zooxanthellae, which supply a source of fixed carbon (e.g. sugars) to the coral. This is critical since corals cannot thrive where ammonia is abundant in the surrounding waters; these environments (like in polluted aquaria) promote the prolific growth of turf algae which smother corals.

There is no need to worry about diazotrophs overproducing ammonia; they only fix nitrogen under conditions of starvation. Fixation is an energetically expensive process. Thus, when ammonia (or other fixed nitrogenous compounds such as nitrate) are abundant in the environment, they simply use them instead. As such, diazotrophs help to maintain proper levels of ammonia in their environment! Amazingly, by concentrating diazotrophs within their bodies (sometimes at 400 times the density of the surrounding waters), corals can fertilize their zooxanthellae despite living in nutrient-poor habitats.

While it occurs widely in all aerobic environments, nitrification is an important step in the nitrogen cycle in soils; however, early aquarists learned to control ammonia (apparently taking a cue from water treatment technology) using these same microbes and processes. Nitrification is the two-step biological oxidation of ammonia to nitrite and nitrite to nitrate. Nitrification yields energy that the organism uses to generate ATP. Nitrification is energetically poor, resulting in slow growth rates for both types of organisms.

Generally, the conversion of ammonia to nitrite is usually the rate-limiting step of nitrification. Ammonia oxidation is performed by two groups of microorganisms: Ammonia-oxidizing bacteria (AOB) and ammonia-oxidizing archaea (AOA). While ammonia oxidation occurs in soils by both AOB and AOA, AOA dominate in both soils and marine environments. At least two AOA (Nitrosopumilus maritimus and Nitrososphaera viennensis) are known. The most studied soil AOB are Nitrosomonas and Nitrosococcus.

The second step is performed by entirely different organisms, mainly by bacteria of the genus Nitrobacter and Nitrospira. Nitrite oxidation is much simpler, with nitrite being oxidized to nitrate by the enzyme nitrite oxidoreductase.

Assimilation is exactly as it sounds; organisms literally take up fixed nitrogenous compounds from the environment and sequester them in their bodies (usually as new biomass). Organisms may utilize NH4, NO2- and NO3- in this manner. However, due to the high reliance on nitrifiers in most aquarium systems, most aquarists promote the growth of assimilators for the purpose of removing NO3- (usually through carbon dosing).

Assimilation of NH4, NO2- and NO3- is carried out by a wide variety of organisms, including both microbes and plants (e.g. algae). In the case of bacteria, aquarists generally target aerobic heterotrophs, though many anaerobic heterotrophs are equally effective. Increasingly, aquarists are also employing algae, both in the forms of phytoplankton and macroalgae. While some of this sequestered nitrogen is eventually exported via protein skimming (bacteria and phyto) and harvest (macro), some is subject to downstream assimilation by aquarium animals that consume the bacteria, phyto and macro.

Ammonification is a process we understand best. In this process, excess nitrogen (largely released during the digestion/metabolism of amino acids and proteins) is excreted into the environment in the form of NH4 or NH4+. Ammonia is produced by a variety of organisms ranging from microbes to animals. In some animal species, urea (CH4N2O) is excreted and converted by microbes into ammonia. 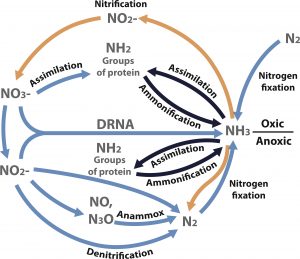 Denitrification is a microbial process (typically anaerobic and heterotrophic) wherein nitrate is converted into N2 through a series of intermediate gaseous nitrogen oxide products (most of which is released into the atmosphere). Denitrifying bacteria are diverse, but use a similar enzyme for the process. Here, nitrogen is not “consumed” but rather used as a reactant in these organisms’ anaerobic respiration.

Denitrification is a somewhat slow process; however, due to the limitations of nitrogen fixation, heavy uptake by assimilators and huge numbers of denitrifiers in the Earth’s anoxic soils and deep sea sediments, there is an overall deficit of fixed nitrogen across the global biome. This means that our planet is, overall, slightly underfertilized! In captive ecosystems, these bacteria are less represented due to a smaller relative abundance of suitable anaerobic habitat.