While there are many species of green, brown and red macroalgae (i.e. multicellular algae) in nature, it is the greens and reds that are most commonly used in planted refugia. Each species is attractive for its own unique set of positive characteristics. Still, one could draw generalizations about each of these latter two big groups: Greens are best for nutrient removal under eutrophic (high-nutrient) conditions (especially high nitrate), whereas reds tend to be most useful under oligotrophic (low-nutrient) conditions.

So, being as so many hobbyists use macros primarily for the purpose of nutrient sequestration, why would they ever choose a species that is slower-growing (i.e. takes up nutrients at a slower pace)? For one, many of the red macros are really beautiful. But also, if the aquarist is already running a fairly stable and low-nutrient system, they could use utilize reds to mop up modest amounts without the risk of algal die-back during bouts of extreme oligotrophy. And one big reason for some aquarists… they have comparatively lower light requirements!

Yup, while thousands of dollars’ worth of top-shelf lighting can’t hurt them, they do not necessarily require anything more intense than you might use to keep, say, a small patch of green star polyps. But that’s not to say that lighting is unimportant to red macroalgae–they’re still algae after all! Here we discuss the biology of red macros and how they differ from green counterparts in their care with an explicit emphasis on lighting.

Like land plants, macroalgae utilize photosynthesis to convert light into chemical energy, which is then stored in glucose. Glucose, a simple sugar, serves as an essential building

block for various carbohydrates as well as an energy reserve for the production of other biocompounds that the seaweed requires for growth and metabolism. Photosynthesis uses carbon dioxide as a reactant (the carbon backbone of glucose and therefore many other organic substances), which is obtained from the surrounding waters. Oxygen (derived from splitting water, and not from the carbon dioxide as many believe) is formed as a byproduct; this is first dissolved in the water, then mostly released into the atmosphere.

Normally, photosynthesis produces a surplus of glucose. Because macroalgae (and all algae) respire, they are always consuming oxygen just like any animal; that is, they consume oxygen, “burn” glucose and release carbon dioxide. However, to the extent that they have access to sunlight in the water, macros actually photosynthesize even more efficiently than land plants. Macroalgae can even carry out photosynthesis while exposed to air and partially dehydrated! But at nighttime (i.e. during dark conditions), photosynthesis ceases. The result is a net consumption of oxygen and net production of carbon dioxide during these hours.

Red algae (Rhodophyta) normally grow at greater depths (sometimes 30 meters deep); they are adapted to surviving in low-light conditions. They have been observed growing as deep as 250 meters below the sea surface in very clear waters. The record depth for algal growth is held by coralline algae discovered at a depth of 268 meters (where just 0.0005 percent of sunlight reaches!). Green algae (Chlorophyta) on the other hand prefer much shallower water; these are adapted to less stable (e.g. intertidal) environments but depend upon intense illumination. And brown algae (Phaeophyceae)? They’re pretty much somewhere in-between. In murky waters, macroalgae grow only at the very surface (if at all).

Of course, this pattern of distribution is just a generalization. Even particular populations can break this rule depending upon factors such as substrate type, nutrient availability, temperature, resident herbivores, etc. But pigmentation profiles are very much depth dependent. For example, surface-dwelling species may produce pigments that protect them from the sun’s harmful ultraviolet rays.

Biologists once believed that rhodophytes (especially coralline algae and red macroalgae) had adapted to deeper environments by evolving pigments with specialized sensitivities to certain light wavelengths; as such, they theoretically could efficiently exploit the parts of the spectrum (blue and violet) that most deeply penetrate seawater. Coralline algae and red macroalgae indeed contain pigments that absorb blue and violet light (hence their red coloration). That all being said, studies have shown that their deepwater habitat adaptations owe less to their particular pigments than to their low metabolism; respiration is minimal and correspondingly their glucose demand (i.e. photosynthetic demand) is also lower. 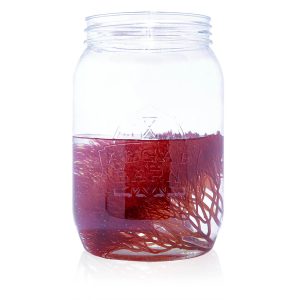 Perhaps the two things reef aquarists strive most diligently for are stability and low nutrient levels. In this respect, we might dare to say that red macros are best suited for “good” aquarium systems (but no need to be snooty here, right?). An aquarist might benefit most from a bed of green algae (chaeto, sea lettuce, etc.) in the beginning. But then, as a reward for eventually getting nitrates under control and stabilizing the system overall, they might be able to restock their ‘fuge with some of the more “ornamental” red macros (spike sphere, dragon’s tongue, etc.).

Many aquarists run a “reverse light cycle.” All this means is that the refugium lights are on when the main tank lights are off and vise-versa. Theoretically, this spreads out the production of carbon dioxide during dark hours and, therefore, helps to stabilize pH over the course of each 24-day cycle. Being as red algae respire at a lower rate, these reversed photoperiods aren’t as necessary (though they are nevertheless potentially helpful).

A rhodophyte-dominated refugium is not just highly appealing visually, but it is also a lot easier to build and operate. As we mentioned, these macros generally are not as picky about light. And as we also mentioned earlier, depleted nutrient levels are less likely to send them crashing. But their slow growth rate brings another positive to the table: They require less frequent harvesting/pruning. That might be music to the ears of overworked hobbyists who prefer to spend their precious spare time enjoying, rather than toiling over, their tank!

1 thought on “Red Macroalgae for the Moderately Illuminated Refugium”