There are several things about brine shrimp that make them so appealing to aquarists and fish farmers. Perhaps most importantly, their newly hatched larvae (i.e. nauplii) are extremely nutritious. Their swimming movements elicit an almost universally strong feeding response from fish. Yet, because they are so slow and wimpy, they’re also very easy for fish to capture and consume.

Put simply, they’re an all-around great live food. Farming operations love them especially for their convenient storage. This is because their tough, resilient, egg-like cysts can be shelved dry for months at a time and remain viable. The cysts are also pretty simple to hatch. Thus, with relatively few pieces of equipment, and in very little space, an aquarist can produce thousands–or millions–of live brine shrimp within 24 hours.

This does not, however, mean that all brine shrimp are “created” equal. There are two things that strongly affect the quality of live brine shrimp as a food. Both of these factors relate to the size of the naupliar yolk sac; these are (1) age and (2) degree of encapsulation. 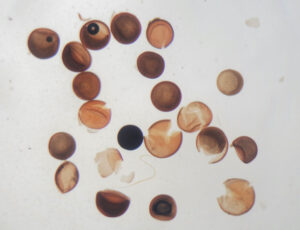 When we state that brine shrimp are nutritious, we say so assuming that they are young. Newly hatched nauplii do not immediately begin feeding; rather, they draw sustenance from their attached yolk sac. Within a few days, their yolk is more or less depleted. Thus, they are ideally fed out right after hatching and lose significant nutritional content after about one day of age. Some studies suggest a loss in caloric value of roughly 40% between one and two days post-hatch.

This is why adults must be heavily enriched before use. Adults are great for a couple special uses–to get a larger, finicky, newly imported fish to begin eating in captivity, for example. However, most commonly kept reef aquarium fishes can just as easily capture the smaller nauplii. And the nauplii are indeed easier for corals to capture.

Furthermore, it is customary in intensive aquaculture facilities such as fish hatcheries to decapsulate the cysts. This basically involves carefully dissolving away the tough covering (i.e. capsule) of the cyst. Decapsulation accomplishes several tasks. For one, it effectively sterilizes the surface of the cyst, virtually eliminating any possibility of transferring diseases from the Artemia to the fish. It also reduces the amount of rubbish (e.g. capsule fragments) that is added with the live feed. Most significantly, it reduces the amount of energy the nauplii must expend to break from their cysts, thereby conserving precious yolk reserves; to be clear, this means that decapsulated cysts produce nauplii with higher caloric value! And, because they lack the poorly digestible capsule, the unhatched decapsulated cysts are also quite nourishing!

It’s very rare (next to impossible, really) to find an LFS that offers guaranteed decapsulated freshly hatched brine shrimp. When stores carry any live brine shrimp, they’re usually dirty, big, old, nutritionally bereft adults. These are sometimes farmed in filthy artificial or natural lakes/ponds and can potentially harbor all sorts of stuff you do not want to put in your aquarium.

At the same time, while hatching your own Artemia at home is not particularly difficult, it can be messy and time-consuming. Particularly so if you decapsulate your own cysts! Remember that decapsulated cysts are hydrated and so must remain in the fridge (that is, they cannot be stored at room temp like “regular” dry cysts); decapsulated cysts also have a shorter shelf life and thus must be used up a little faster. Thus, while decapsulated cysts produce a far superior food to that of untreated cysts, they are significantly more expensive. 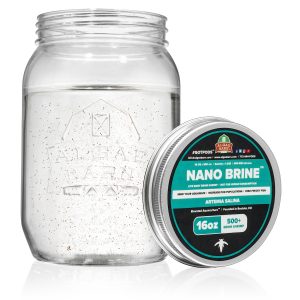 It would seem that for most of us, the simplest and most cost-effective source of brine shrimp would be through the mail. Like, right to your doorstep. And it is. But there are some challenges to that.

First of all, even larval brine shrimp don’t fare well for long in a bag together–especially when packaged densely in warm conditions. Yet, it doesn’t make sense in terms of shipping cost to order just a few individual Artemia, right? And then there’s the issue of shipping time and loss of nutritional content. Sure, this would be negligible if you had each package shipped next-day, but the cost of that would certainly be prohibitive.

Presented with these issues, an exceedingly brilliant technician at AlgaeBarn developed a method for transporting Artemia that no one had ever used before–shipping decapsulated cysts that hatch in transit. The dark conditions in the shipping container prolong the incubation period by about a day. Consequently, the cysts typically hatch just before reaching your doorstep via USPS Priority Mail, thereby preserving their wholesome goodness. With high hatch rates. And with hardly any mess. And with absolutely no pathogens! This legendary product, Nano Brine, has revolutionized how countless home aquarists obtain and use “baby” brine shrimp.

Even though we’ve made high-quality live Artemia as convenient and as economical as possible, we can’t say that it’s THE cheapest or THE easiest food out there. And we’re okay with that. When you consider the size of the overall investment in your aquarium, and how important diet is to the health of your animals, Nano Brine will seem pretty awesome in terms of true value. When you then factor in the added convenience and discount of a Nano Brine subscription, the deal becomes too good to refuse!