For many aquarium hobbyists, acquiring and displaying a beautiful tridacnid clam is one of the most definitive milestones in their mastery of the art. While these strange and beautiful bivalve mollusks are a real pleasure to have, they are perhaps even more challenging to keep than most coral species. Specifically, they demand (yes, absolutely require) extremely bright lighting. They cannot tolerate poor water quality. And, they most certainly are not forgiving when it comes to rough handling. As such, all members in the group are best obtained only by experienced aquarists for larger, well-equipped and thoroughly established aquarium systems.

That being said, some tridacnids are more demanding than others. Take for instance the derasa clam. This species is perhaps the easiest to care for, as it is just a bit hardier and slightly less finicky about lighting. Indeed, it is often recommended as a species for the first-time clam keeper. Contrast this species with the maxima clam, which is the most delicate of the group and dependent upon very intense full-spectrum lighting. As you might guess, it is usually recommended only for advanced hobbyists. Looking at some other species, gigas clams are very much like derasa whereas crocea clams are very much like maxima. But is there a species in the group that is truly suitable for an intermediate level aquarist?

Regardless of its place on any “ease-of-care” list, the squamosa clam (Tridacna squamosa) is a striking example of its genus. Extremely attractive and distinctive, it is a highly sought after and much prized species. But yes, it really does qualify as a “medium difficulty” tridacnid clam.

That much should be pretty easy to explain. It’s simply regarded by many experts as a bit more difficult to keep than derasa clams–a bit less so than maxima clams. It thus makes good sense to try a derasa first (or maybe a gigas, if you have the space!). Only after achieving clear, long-term success with a squamosa clam should one move on to a maxima or crocea.

Makes total sense, right? True confidence only follows measured success. But the funny thing here is that people simply like what they like. For example, there certainly are aquarists out there that find gigas clams to be most stunning with their golden mantle and sometimes clean-white shell. They might start, and end, with this species. Similarly, some actually prefer squamosa clams, not just for their gorgeous mantle coloration but also for their heavily fluted shell. However, even if your end goal is to keep squamosa clams, it is strongly advised that you start with (and first succeed with) a derasa or gigas. 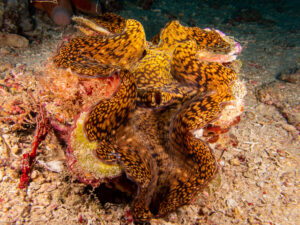 One great thing about T. squamosa in particular is its huge degree of variation with respect to mantle colors and patterns. For this reason, a keeper may end up acquiring a number of specimens to keep in the same tank at the same time. Certainly, one might develop a special liking to any tridacnid species and do the same; but given its exceptionally rich variety, this seems to happen with T. squamosa the most.

The typical coloration for this species is pretty hard to mistake. A dark, rich, chocolatey burgundy background color covers just about all of the mantle. Laid out over that are stretched-out blobs of golden beige. At the center of each of these markings is a baby blue dot, often ringed with a white halo. In some examples, the white is bright enough to nearly flush out the blue. Tiny black dots smatter the edge the mantle and serve as simple eyes.

But as we mentioned, the coloration of this species can vary dramatically. In some examples, the background is very dark and the golden “blobs” are stretched even further into thin lines, with a thin blue edging along the mantle margin, creating a pattern that superficially (albeit very strongly) resembles that of T. derasa. In some other rare examples, the blue spots are much exaggerated and cover a darkened (almost black) base color, creating a pattern that very much resembles that of T. maxima.

Particularly in the cases where the squamosa clam (based on its mantle coloration) looks a lot like its cousins, it is best identified by its distinctively large shell scutes. In this species, the scutes are broad, thick and spaced fairly well apart from each other. Be aware, though, that while this feature readily identifies the species, a lack of scutes is not necessarily conclusive; this is because they may be eroded or broken off in T. squamosa specimens that have been actively boring into the rock base. 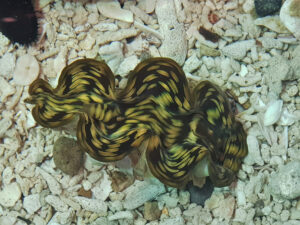 Husbandry for this species is reasonably straightforward so long as the tank set-up is appropriate to begin with. This is especially so in the case of SPS-dominated systems which normally provide very strong lighting and very strong water flow. Just remember that while squamosas enjoy good water movement, they do not like getting directly blasted near the outlet of a powerful pump.

Water quality should be excellent–as it should be for all tridacnids. Clams are known to draw surprisingly large quantities of calcium and carbonate from the water, and squamosas (with their extra-heavy shell) are hardly an exception to this, so be sure to maintain proper calcium as well as alkalinity levels at all times.

Finally, be watchful of fishes’ habits around your squamosa. Sure, you won’t even think about putting any tridacnid clam in with a trigger fish, puffer fish, etc. But even “reef-safe” fishes such as pigmy angels and blennies can nip at or otherwise irritate clams on occasion!