You are here: Home / Invertebrates / Crabs / All About Saltwater Tank Crabs

Crabs can be fun, interesting, and helpful additions to a saltwater aquarium. There is a large variety of saltwater tank crabs that are available for hobbyists to buy. From the Emerald to the Horseshoe to hermits, they come in many different shapes and sizes and with that many different uses as well. 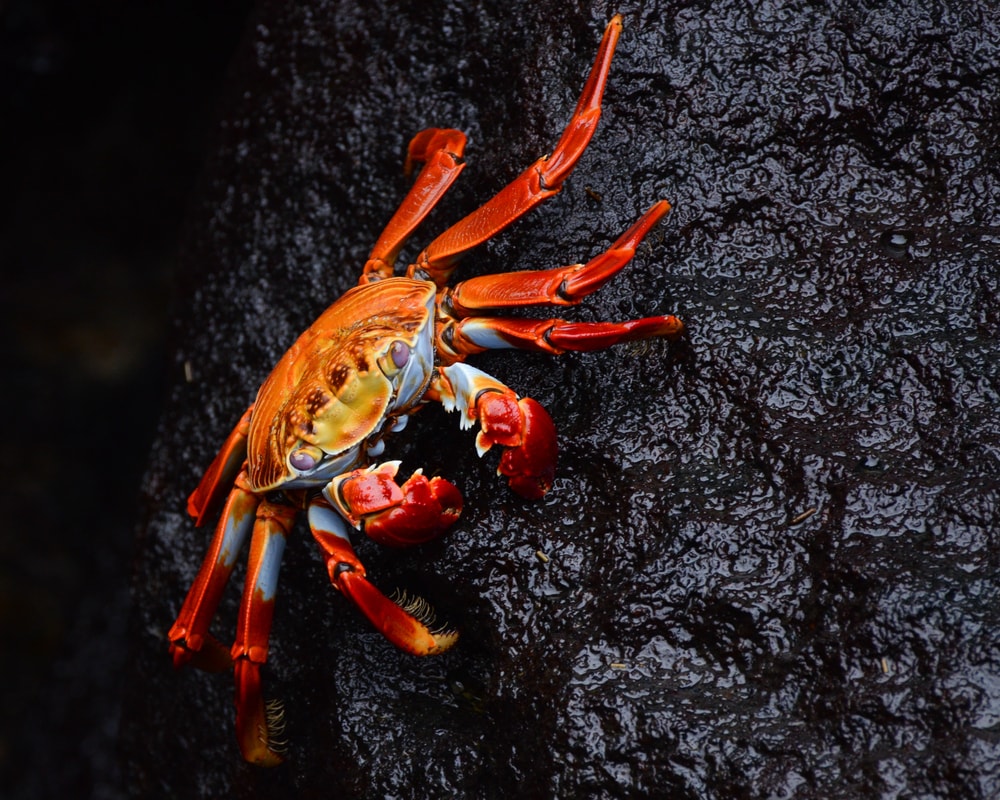 rabs are a type of crustacean from the Decapod family. They typically craw on the floor of their environment with spider-like movements. Unlike spiders, crabs have hard shells that cover the entirety of their body. There are many ways in which they can go about having this sort of protective shell. A majority are somewhat flat and have a broad shell that covers and protects them. Hermits, though, use snail shells as a form of protection. There are also some such as the Arrow Crab and Horseshoe, that come in unique shapes.

Crabs are scavenger animals. They search the rocks and sand of their environment for leftover food, algae, and possibly weaker fish. While some are predatorial, there are saltwater tank crabs that are not. Some crabs are carnivorous and some are strictly herbivores. Most are omnivores though. Here is where research is important. Porcelain Crabs are very peaceful and will not harm other inverts or fish, but Sally Lightfoot Crabs are more aggressive and may take an unsuspecting fish as an opportunity for food. The aggression levels for crabs vary from species to species and all work in different situations. Some crabs are brutally violent with each other, but won’t hurt corals or fish. Some will kill snails for food or shelter. There are also cases in which a seemingly peaceful crab will snatch a smaller fish and eat it and you would never know what happened to the fish.

Another issue with crabs, in general, is that they are extremely versatile and while it is fun to watch them scurry around, it also means that they are escape artists. Not all crabs are capable of escaping a tank, but there surely are a few.

In the early days of my reefing experience, I had an army of Striped Shore Crabs in my tank. These crabs should not be put in an aquarium at all, but I was not aware of this at the time. Almost every morning I would find some of these crabs in the bathroom, around the tank, and other parts of the house. This is just one specific species, but they are similar to most other crabs in that they can get around!

For the most part, crabs are great for saltwater aquariums, but it is surely beneficial to be aware that the can surprise you in ways you may not enjoy.

There are many different common saltwater tank crabs, and it is important to know about them to determine which would work in specific situations and which ones wouldn’t. In the next few paragraphs, I will inform you of some of the more common crabs, such as Scarlet Reef Hermit Crabs and Emerald Crabs.

Certainly one of the most common types of crabs are hermit crabs. The term hermit crab refers to a large group of crabs that typically live inside of snail shells. While there are very large hermit crabs, the ones that are best for saltwater aquariums are smaller, such as the Scarlet Reef Hermit Crab. The Scarlet Reef Hermit Crab (Paguristes cadenati) is a peaceful crab that is used for algae and detritus control. They are very hardy and require little care. They are distinguished by their bright red legs and grow to a max size of an inch and a half. These hermit crabs would be a great addition to a tank’s clean up crew. 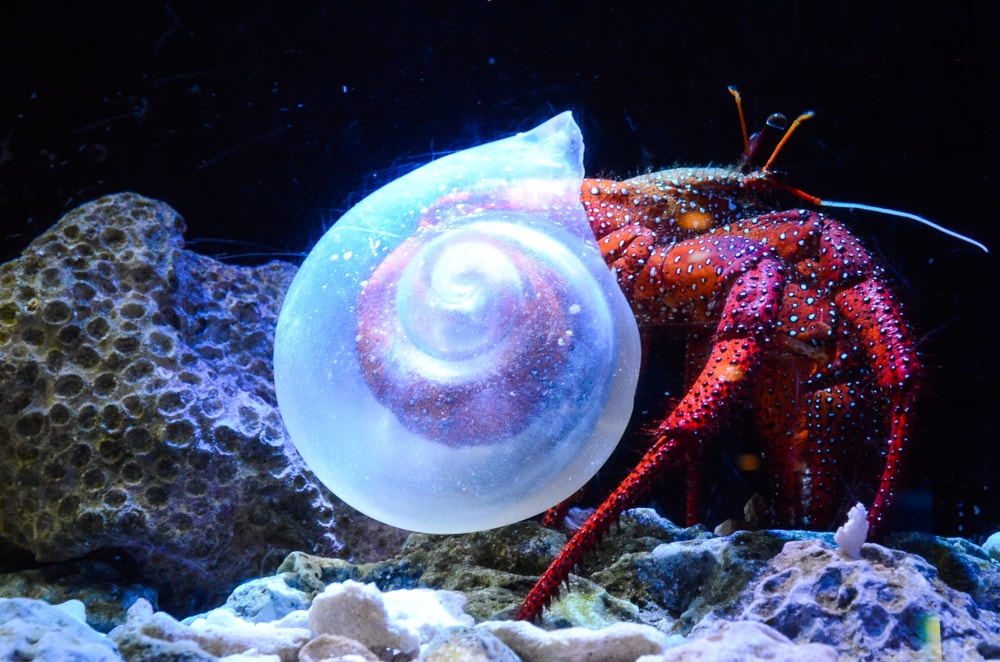 that other crabs can not.

Both of these hermit crabs are peaceful and reef safe, but like all hermit crabs, they need shells to live in. If there are no shells available in the tank, they will go after snails for their shells to live in. They may also go after each other for shells as well. That is the only downside to hermit crabs; no matter what you do, you will always end up with much less than what you started with due to their habit of attacking each other.

Another very popular crab is the Emerald Crab (Mithraculus sculptus). These crabs are very easy to care for and are another great option for algae control. They are especially known to eat bubble algae, which is why so many hobbyists favor them over other crabs. These crabs are reef safe, but if they get hungry or run out of their food source, the may go after corals, other inverts, and fish. They may even target smaller fish without having a lack of food. If they do target a fish, it will most likely be a sleeping fish, a bottom-dwelling fish, or a sick fish. This is something to keep in mind when making livestock decisions. When algae is there, these crabs can make good progress on the nuisance algae.

If you are not getting a Porcelain Crab (Petrolisthes galathinus) for its clean up abilities, then it must be for its stunning looks. This peaceful and reef safe crab can have a blueish gray body with bright blue highlights, black speckled spots, and some orange around its legs. That is just one variant of a few different color varieties. Along with two large claws used for scavenging, Porcelain Crabs also have a pair of filter feeding arms, making them filter feeders. Porcelain Crabs will also live in groups peacefully.

The Sally Lightfoot Crab (Percnon gibbesi)  is a semi-aggressive scavenger. It has a mean appearance with its long eight spider-like legs and suspicious eyes. It requires lots of rockwork for it to hide and search for food. You may want to steer clear of this crab as it gets much more aggressive as it gets bigger. It may catch smaller fish and inverts for food, especially if it is underfed. While this crab could be beneficial to the control of detritus, it might not be worth it because of its aggressive behavior. Another example of an opportunistic feeder is the Arrow Crab or Spider Crab. It is also known to attack smaller fish and other crustaceans. Although it looks cool, it is another crab that should be put into tanks with caution. One final, more extreme, example of this type of crab is the Stripped Shore Crab, as mentioned early. These crabs are very aggressive and can grow to the size of the palm of a hand. These crabs are typically not sold in stores or online but are rather found on the cost of California. Even though they are uncommon, it is beneficial to be aware of these types of crabs.

Crabs could be the best thing or the worst thing you add to your aquarium, depending on which one you add. One thing is for sure though, there is no shortage of variety within in the category of saltwater tank crabs. As long as you are aware of the risks and the benefits you should be able to decide which crab is best for your saltwater aquarium.