You are here: Home / Other / Bubble Algae: How Bad Is It?

Every reef tank has some form of hardscape–a reef base. Unless they are obtained dry, these materials almost always have some form of algae on them, even bubble algae. And even if dry rock is used, tiny bits of algae can slip into the tank later by way of coral skeletons, frag plugs, etc. While extremely common, it’s a pretty frustrating occurrence, as it almost always means that you’re going to spend some time and effort (yeah, probably money, too) to eradicated it.

Some of these algae are freaking horrible and make some aquarists’ spines tingle at first sight. This is not just because they are usually quite ugly, but also due to their ability to smother and kill corals if allowed to proliferate. But then, there are some types that really aren’t that bad so long as their growth is controlled early in the game. Some of these might even be at least a little desirable if maintained in very small densities. One such alga is Valonia spp.

Valonia is known to aquarists as bubble algae. This common name is apt enough, given its spherical shape. Its outer cell wall can be quite shiny, sometimes glimmering with the sheen of a green pearl. Older individuals may have epiphytic growths of other algae (including coralline algae) on them. When growing densely, bubble algae present themselves as a large number of usually small, bubble-like structures. While technically microalgae, they can resemble macroalgae in their sometimes impressive size; some individual specimens in captivity have reportedly reached the size of a tennis ball. 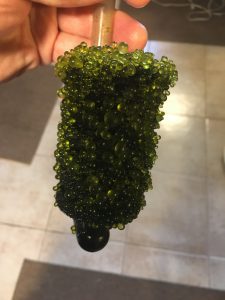 Interestingly, bubble algae are regarded as among the largest known single-celled organisms. That’s right, some of those huge green balls are a single cell. How do they get so big? That’s where things get kind of strange (and a little scary, since this is how they are capable of reproducing so quickly). Inside the cytoplasm-filled bubble are copious free-floating, individual nuclei, each capable of growing into a new bubble. Thus, bursting them can hardly be considered a reasonable method of control; doing so releases hundreds or even thousands of new recruits into the water column.

Partly owing to their unusually glossy luster, many hobbyists are actually kind of fond of them. Maybe you are too, or were before you had so many. For sure, sparse colonies of bubble algae are completely natural and are not really much to worry about. If anything, an abundance of them is really a symptom of a bigger problem: Excessive dissolved nutrient concentrations.

But you didn’t spend that kind of time and money for a tank covered in algae, right? Just take a look at the image to the right (a sponge filter from one of the author’s abandoned test tanks); these things are ruthless when given a chance to spread without interference. This pretty much is a species that you have to make at least some effort to control. This includes prevention and physical removal only; while there are herbivores that eat them (e.g. emerald crabs), these creatures probably do worse in aiding dispersal as they break the bubbles.

After maintaining low nutrient levels, the best way to prevent Valonia plagues is through competition for space with other algae. Bubble algae often appear in the earlier stages of reef tank development when there might be relatively little coralline algae coverage on the reef base. Bubble algae are few where coralline algae are encouraged to flourish. To give coralline an advantage and an early boost, it may be helpful in preventing/controlling Valonia outbreaks to seed new systems (particularly where fresh dry rock is used) with live coralline spores as with Coralline Algae in a Bottle.

So, what should you do if you see a couple green bubbles pop up out of your live rock? Especially if your aquarium system is young, it is best to physically remove them when you can. And if you actually like a few here and there, and intend to keep some? Again, especially in younger systems, it’s advisable to remove all Valonia on sight. Until the coralline is really taking off, and before you have many corals covering the reef base, it’s just not worth risking an eventual plague. Besides, if you’ve seen any at all, you potentially already have bazillions to come. 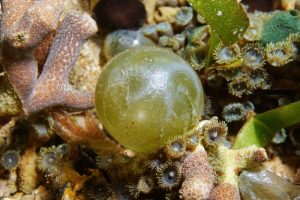 Removing bubble algae isn’t all that difficult but is a lot different from removing most other algae. Usually, individual bubbles can be lifted from the rock–gently–by hand or with the aid of needle nose pliers. The real trick, of course, is to free the bubble from the rock surface without “popping” it. You’ll eventually get a knack for determining when individual bubbles are at the stage where the cell wall is toughest (and therefore least likely to break during removal).

Over time–as your system matures–controlling bubble algae can get much easier. Hungry copepods graze the microscopic settled recruits before they grow to reproductive stages. Coral cover increasingly takes up space and shades the reef base surfaces. Water quality improves and stabilizes. If your tank is healthy enough and mostly algae-free, you might even be delighted to see one of these little green pearls appear once in a while!