You are here: Home / Invertebrates / A Look at the Moon Jellyfish (Aurelia aurita)

It was not so long ago that one could see jellyfish only at the public aquarium or in the ocean. There were few or no sources of healthy animals for those aquarium hobbyists that were interested in keeping them. Even more difficult to obtain were the specialized “kreisel” aquarium systems needed to successfully house most jellies. Fortunately, aquaculturists have begun to produce hardier, captive bred specimens available for trade in the private aquarium industry. And, well-made kreisel style home aquaria are now more accessible. Throughout all of these developments, one species has remained among the most popular by novice and expert keepers alike: the moon jellyfish.

The moon jellyfish (Aurelia aurita) has proven to be reasonably resilient and adaptable in a captive setting. Now, it is still a jellyfish, so it does require some special care and very, very careful handling. But given good water quality, the right foods and an appropriate aquarium system, this species can actually flourish in captivity. It probably helps somewhat that much is known and recorded about their husbandry, as they have been kept by researchers for many years and are among the most studied of all the jellies. 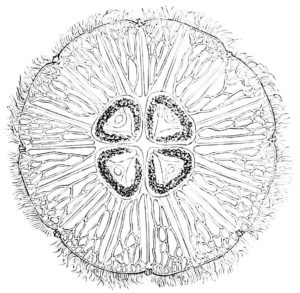 It is in large part the animal’s toughness (well, at least for a jellyfish) that the species is distributed across an unusually extensive range, including both of the U.S. coasts as well as the Atlantic coast of Northern Europe. Moon jellies are a coastal species, preferring sheltered areas such as bays and estuaries. Hailing mainly from temperate regions, they can survive in water temperatures of 43-88°F (6-31°C) and prefer temperatures of 48-66°F (9-19°C). Surface waters in the moon jelly’s range can actually get rather warm during the summer months. When this occurs, dissolved oxygen levels can drop dramatically. As it happens, the moon jelly is actually well adapted to handle hypoxic conditions. It sticks around even as other zooplanktivores (such as fish) move to more highly oxygenated areas. For the jellyfish, this simply means a lot less competition for its zooplanktonic food source.

Aside from their relative hardiness, moon jellies are likely chosen by aquarists on account of their beautiful appearance and mesmerizing swimming behavior. They have the very recognizably jellyfish umbrella shape and numerous thin, almost tassel-like tentacles ringing the margins of their bodies. When the lighting is just right, a pretty iridescence shines over their bodies and tentacles. The strong pulses generated by their bodies as they swim immediately dispel any misconception that all jellyfish are mere blobs that just float around with the currents. A dense group of moon jellies all hovering together can be a very impressive sight.

Like other jellyfish, the Moon Jellyfish does not have any kind of respiratory, circulatory or excretory system. Its simple nervous system, consisting of a nerve net, is used primarily to control swimming movements and feeding responses. Its “jelly” layer (known as the mesoglea) is what gives the animal’s body its consistency, though it is made up of 95-96% water. Within the mesoglea are various fibers and amoeboid cells. The tentacles are somewhat short for a jellyfish but may be quite numerous. It takes on the characteristic saucer-shaped medusa body form, though it does (like many other inshore species) go through a small polyp stage earlier in its life cycle. The umbrella typically reaches 7-10 cm in diameter, but grow as large as 40 cm. It is scalloped at the margins to form eight distinct notches. A mouth is located on the underside of the umbrella. The area encircling the mouth, referred to as the manubrium, leads to four long, gracefully dangling oral arms.

Moon jellies feed on small planktonic animals. This includes a long list of items, of which copepods are firmly at the top. The animal’s tentacles as well as its manubrium are covered with stinging cells (i.e. nematocysts). The tentacle contracts to bring the captured prey to the jellyfish’s body. The food item is then transferred over the mucus by cilia to pockets on the edge of the umbrella. From there, food is carried by cilia on the oral lobes to a gastrovascular cavity. Cilia within the cavity deposit food into the cavity in addition to expelling wastes.

Aurelia is believed to not usually live for more than six months in the wild. However, under the rather pampered conditions of a well-kept jellyfish tank, they can easily reach a year of age. Some individuals kept at public aquariums are reported to have lived for several years. 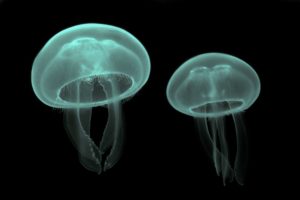 Though they can in some cases be kept in specially constructed rectangular tanks, moon jellies will definitely fare better in a kreisel tank. Tank construction and water flow should be such that the animal cannot become stuck on the drain intake. There should be no bubbles in the water column, as they can tear the delicate umbrella. Lighting, on the other hand, does not appear to be a major concern in keeping these creatures. They are best offered a diet of copepods and newly hatched brine shrimp. Small, frequent feedings are preferable to those that are huge but infrequent. Moon jellies are easily damaged physically. Thus, they should be handled as gently and as seldom as possible. When they must be handled, one should use a cup rather than a net, taking care to keep them submerged in water at all times.

There has never been a better time to try one’s hand at moon jellyfish keeping. They can present something completely new and exciting even for advanced aquarists. Yet, a better understanding of their captive care and the availability of aquacultured specimens has made successfully keeping these animals much more attainable for veterans and newbies alike. It is even better that high quality live foods that are suitable for moon jellyfish (such as Apocalypse Pods and Nano Brine) are now conveniently available. With a little bit of attention, these bizarre but beautiful animals can reward their keeper with a great deal of enjoyment.