While mixed reefs may be the most prominent reef aquarium style, many hobbyists opt to keep a specific group of corals in their aquarium. One of the largest, most diverse groups of corals is the hobby-named large polyp stony (LPS) group of corals. These are stony corals with fleshy bodies and large polyps. This article will discuss the general requirements and ideal conditions for keeping LPS corals.

While it is convenient to group a bunch of corals into one category, it is often more challenging than that. One can’t say that all LPS corals have the same care because we decided to call them LPS corals. However, there is a trend for a large portion of the corals in this category. 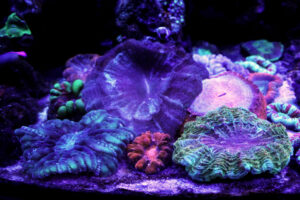 The main thing you need to be cautious about is providing these corals with too much light. While it is possible to brown out LPS coral with too little light, you are more likely to overexpose them. Many LPS corals, such as Blastomussa, do better in lower light. Chalice corals can be adjusted to higher light, but this has little benefit.

Again, a few LPS corals do better in higher light, but most prefer low to moderate lighting. Ensuring you don’t provide too much light will save you from trouble keeping these corals.

Flow might be the most challenging condition to get right for LPS corals. Many of these corals prefer a sweet spot between low and high flow. For example, chalice corals, brain corals, and Goniopora all do best under moderate flow. Provide too little flow, and detritus will build up on the coral. Provide too much, and the tissue might recede. For most LPS corals, providing enough flow to ensure detritus can’t settle on the coral is enough. However, a few LPS corals, such as Ducanopsammia and Euphyllia, prefer stronger flow than most LPS corals. While you should provide moderate flow for most of the tank, having a few high-flow areas would be wise if you want to keep LPS corals that prefer higher flow. However, if all of the LPS corals you wish to keep prefer moderate flow, then don’t bother creating a few high-flow areas;

The primary way to tell if you are providing too much or too little flow is simply by observing the behavior of the corals. If they look sucked in or not fully extended, this is a sign of too much flow. On the other hand, you must provide more flow if you see detritus settling on the coral.

Water chemistry is vital for all corals but especially for stony corals that require elevated levels of calcium, alkalinity, and magnesium. Many LPS corals are more tolerant to fluctuations than SPS corals such as Montipora and Acropora, but you should still aim to keep your water chemistry as stable as possible. Stable water chemistry will lead to happier corals.

LPS corals are typically slow growing compared to SPS, so they don’t consume as much calcium. For small or medium-sized aquariums with a few LPS corals, doing water changes alone will likely be enough to replenish the calcium. However, as you add more corals and they grow larger, you may need to supplement the calcium, alkalinity, and magnesium. When there is little demand, dosing by hand might make sense. Another great way to replenish elements in an LPS tank is with kalkwasser. Kalkwasser will keep the calcium and alkalinity balanced and can be diluted a lot if needed. 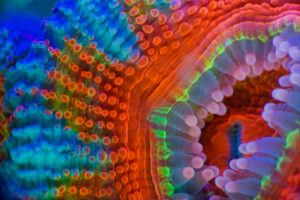 Overall, LPS corals do not have high calcium demands, so this isn’t typically something you should worry about until your corals grow out. The most common issue hobbyists run into in this area is overdosing. You are more likely to cause issues by dosing too much than when dosing too little. Be careful not to dose too much, and you’ll be in a good place.

Out of all the corals, LPS corals are the most aggressive feeders. That doesn’t mean every LPS coral will benefit from regular feeding but some will. Corals such as chalice corals, Favia, and Micromussa will benefit from a few feedings per week. A few LPS corals, like Euphyllia, seem more irritated by feedings than anything.

The risk with feeding your corals is feeding too much. Too much feeding can lead to nutrient spikes, which you should try to avoid. Dosing your aquarium with live phytoplankton and amino acids is an excellent way to feed because it keeps the corals happy and colorful without fouling the water. Adding copepods to your aquarium will also help feed your corals. Use various methods, but be careful when using powdered or frozen foods, as they can easily cause nutrient spikes.

The main difficulty when feeding corals is preventing the fish from stealing the food. To deal with this, you should ensure your fish and inverts like shrimp and crabs are well fed before you attempt to feed the corals. 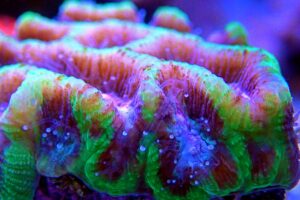 Lastly, let’s talk about aggression. LPS corals will deploy several types of attack and defense mechanisms. Sweeper tentacles can become a huge problem in an LPS dominant aquarium. Even worse are mesenterial filaments, which are part of the coral’s digestive tract. This attack allows one coral to digest and severely sting another coral. The main thing to avoid aggression issues is to give lots of space between different kinds of corals. Grouping corals that are either non-aggressive or peaceful with their own time is a great way to save room for the more aggressive corals. Dealing with coral aggression is a vast topic that could make up several other articles. As you spend more time in the hobby, you will learn how to deal with it better. Providing plenty of room between corals will give you a good start.

LPS corals are some of the most diverse and exciting corals. Beginners and experienced hobbyists alike love them. You are in for a treat if you curate your aquarium to be an LPS dominant aquarium. Following these general care requirements will get you far with your LPS corals.