Do the terms SPS or LPS really mean all that much? Because we aquarists do tend to infer quite a bit about the care of different coral genera based upon these designations. So what does that mean for genera like Turbinaria? Because some authors describe them as one type, and other authors describe them as belonging to the other type. If “SPS” and “LPS” are truly meant (at least as a general guideline) to describe a coral’s favored environmental conditions and not just the obvious–its polyp size–then maybe we could call Turbinaria an “MPS.” A bona fide medium polyp stony!

In any case, we must be cautious assuming anything with regards to coral husbandry based on broad categorizations such as these. Thankfully, Turbinaria is a fairly adaptable genus that is great to keep in various kinds of reef aquaria. It is both hardy and non-aggressive. It easily tolerates conditions that fall between the “norms” associated with SPS and LPS coral types. And, yes, the polyp size is somewhere right there in the middle of the two.

This article provides a brief rundown of these majestic corals–their morphology and ecology as well as their captive care. 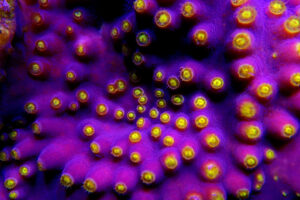 Turbinaria is distributed very widely across the Indo-Pacific Ocean from the Red Sea to Japan and the Great Barrier Reef and Tonga. This genus claims a number of colonial stony coral species in the family Dendrophylliidae. The genus is known by several common names including include scroll coral, cup coral, vase coral, pagoda coral, disc coral and ruffled ridge coral. As are all members of the family, all Turbinaria species are stony. They are zooxanthellate and therefore occur only in relatively shallow, sunlit waters. To note, it is one of just three “photosynthetic” genera in the family; the others (such as Dendrophyllia) completely lack zooxanthellae and thus occur only in caves or in deeper waters. Unlike Turbinaria, some members of the family live as solitary polyps.

Turbinaria is a common denizen of deep fore-reef habits (below 20 meters) and are generally shaped in a way that catches the most light. They sometimes also occur on reef slopes and back reef margins (at least in the deeper parts where there is less competitive pressure from fast-growing SPS such as Acropora). The huge, shady, overlapping plates created by mature Turbinaria colonies create hiding spaces and microhabitat for diverse reef fish and vertebrates; notably, they sometimes facilitate the growth of other coral species. Colonies can get pretty big (20-50 centimeters). Its growth form may be massive, laminar, columnar or foliaceous (with foliaceous being the most common form). They can form flat plates, tiered structures or encrust over hard reef surfaces. These flattened forms tend to angle in a way that allows detritus to fall off of them. Towering structures might rise from the middle of the colony to form cup- or vase-like shapes. Actually, depending on environment factors, a colony might assume many different growth forms. Those growing in strong currents can fold and bend into whorled rose-like shapes. They tend to be flatter in deep waters and scrolled in shallow (i.e. bright) waters. In the scrolled form, growth is only fast along the outer edges. Turbinaria may be found in colors ranging from green to yellow and brown, and sometimes soft blues, purples or pinks. For sure, it is not easy to identify Turbinaria species on the basis of growth form or coloration alone.

The corallites only cover one side of the plate, are spaced well apart and may project from raised tubular mounds. The septa are short. Polyps are robust with a thick, tubular body column and short tentacles. It is generally nocturnal, with the polyps opening at night, though the well-known Turbinaria peltata is a notable exception. 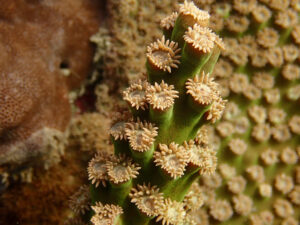 While they prefer intense illumination and moderate-to-high water movement, turbinaria corals are fairly adaptable. In systems where the keeper anticipates keeping SPS, the brightest areas at surface in the highest currents are best reserved for the acros, montis, etc. Instead, you can place your specimen in a moderately illuminated area with modest water flow (maybe somewhere at mid tank height). Do pay some attention to the grow form already exhibited by the specimen; a highly scrolled form might indicate that it originated in a brightly lit environment and so will need better than average light exposure. Also, try to deliver a little water movement (especially random water movement) to scroll-like or cup-like forms as to make sure detritus cannot settle on and eventually kill a portion of the colony. Some say that a good blast of current for at least part of each day will suffice here.

Turbinaria are usually pretty rugged and tolerate a good deal of handling. Note that they normally secrete quite a bit mucus when handled. Because the polyps only grow on one side, mounting this coral to the hardscape with glue or epoxy is simple enough.

This coral does not require feeding, though it may grow faster if occasionally offered small zooplanktonic items such as live baby brine shrimp. Interestingly, it can also engage in intracoelomic feeding, using strings of mucus to capture tiny phytoplankton and bacterioplankton.

So, is Turbinaria an SPS or LPS? Who cares… this coral (and captive-propagated specimens particularly) can flourish in pretty much any healthy reef tank. And especially if you score one of the extra-colorful varieties, a Turbinaria can easily become one of the most eye-catching pieces in your tank.