A freshly set up and cycled reef aquarium is something like a fresh canvas–a seemingly vast, open aquascape. Following our impulse to start covering the hardscape, we tend to start stocking corals by mounting a fistful of frags over the top of the rocks. A beginner reef aquarist in particular might first test the system with a few hardier soft corals such as green star polyps… But either way, the usual order of operation is to start with species that grow over the solid, rocky reef structure.

And then we add more corals. And yet more. Eventually, most hobbyists look to the bottom of the tank for new space and subsequently start covering that sprawling crisp white sand (or glass if you go with a so-called bare bottom). Here we introduce species that don’t necessarily need (or prefer) to be mounted to a hard substrate. Elegance corals… Meat corals… Scolies… Stuff like that. But the one coral type that most people ooh and ahh at when it’s time to stock the tank floor is plate coral.

This article describes the biology of plate corals and provides an overview of their captive care. 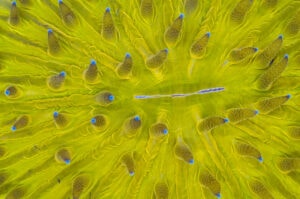 Plate corals belong to the genus Fungia (family Fungiidae). Fungia contains just one species, Fungia fungites. At one time, Fungia claimed over 30 species; however, based on more detailed studies, it was reduced to a single species in 2015.

Fungia fungites is mainly a solitary (single-polyp) LPS coral. Some specimens are reported to reach a foot across. These corals are always round or oval in shape. Polyps vary widely in color (white, yellow, red, purple, orange, blue, etc.). The polyp grows from a calcareous plate-like disc (i.e. the corallite). Huge sheet-like septa radiate from the center of the corallite over the corallite wall. While juveniles may be attached to rock, adults detach from the rock and live freely on the seafloor.  Fungia fungites is sometimes confused with members of the related Cycloseris. While Cycloseris is always free living (even in its youth), Fungia always exhibits a “scar” on the underside of the corallite revealing its former place of attachment as a juvenile.

Plate corals rely on several different feeding strategies. For the most part, these hermatypic corals harbor symbiotic algae from which they obtain much of their food energy. They also graze on plankton, suspended food particles (e.g. marine snow) and can absorb dissolved organic matter (e.g. free amino acids). Feeding tentacles are usually extended at night. With some coaxing from a “smelly” food item, they may also open during the day. And it certainly is a coral that enjoys a meaty feast from to time!

Fungia reproduce both sexually and asexually. In addition to typical spawning, new plate corals can emerge from tiny fragments broken from the mother polyp. 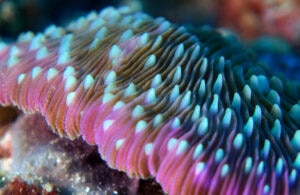 Though they are physically delicate (at least the huge, balloon-like polyp), plate corals are considered to be pretty easy to keep. They prefer to live on the flat bottom of the tank with moderate lighting. Adding them later–after you’ve already securely mounted corals above them on the reef structure–is a good idea, as you will be sure that newer corals cannot fall on them from overhead. It is best to avoid keeping them with excavating fish like sleeper gobies, which may cover them with sand. Even though plate corals are capable of casting off this sand, this extra activity does seem to exhaust them and stress them out. Otherwise, plate corals are compatible with most other reef-safe animals. Just make sure other animals don’t bump into your plate coral when it is fully expanded (the exception is other plate corals, which don’t really seem to mind touching each other).

Maybe the most unusual thing to watch for when keeping this coral is its wandering. Yes, it can actually move (sort of like an anemone). It can even climb slight slopes! So, even though you might put it in a place of your liking, it can relocate. Certainly do not put a plate coral up on your rocks, as it will likely move and fall to the bottom (in the worst case, upside down or on top of another coral). Some claim that these corals can right themselves if flipped over, but don’t count on it!

To be clear, they do not need to be fed regularly (if at all). But if you enjoy feeding your corals, by all means, offer your plate coral some medium-sized morsel such as frozen brine shrimp or mysis.

Fungia corals are just awesome. In terms of appearance, they add some color (a lot actually) to an otherwise bleachy-white sand bed (or plain tank floor). But they are also unusual and indeed fascinating in their motility. And best of all, provided that you don’t handle them roughly, they are quite hardy as far as corals go. Captive-propagated specimens (such as the brilliantly colored Orange Plate Coral from Biota) are among the easiest to keep. You’ll probably never get as much satisfaction elsewhere from just one polyp!