You are here: Home / Captive Bred Fish / Rabbitfish / The Goldline Rabbitfish: How the Aquarium Industry is Repopulating the Waters of Palau

One of the most exciting aspects of working in this industry is being a part of ocean recovery efforts. For World Ocean Month, we have highlighted some of the ways we can all do our part to repair the seas. This has always been AlgaeBarn’s goal – to share ideas and inspire others on ways we can make a more sustainable hobby.

We have teamed up with our friends at Biota because they share our vision. Biota’s mission is to leave the ocean in a better state than they found it. In this article, we are talking all about their captive-breeding programs. Biota has been very successful with repopulation efforts in Palau.

The Rabbitfish is a crucial part of the ocean’s food web. After facing declining numbers due to overfishing, Biota’s initiatives have helped to repopulate this remote area. For every fish that Biota sells, they release two Goldline Rabbitfish to the waters of Palau. 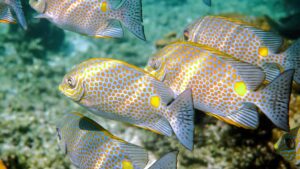 Rabbitfish are a family of marine fish that has been overlooked. Rabbitfish have good qualities as aquarium fish. The Goldine Rabbitfish is a captive-bred species that will have aquarists wondering why they don’t get more attention!

The Rabbitfish are distinguished by their big head and small, tapered body. Their head gives them a rabbit-type appearance. They are attractive fishes with large eyes. They can reach a length of five feet and can live up to 30 years.

Why we love rabbitfish

The Goldline Rabbitfish is an algae eater and makes a great fit in larger tanks. They’re voracious eaters! Rabbitfish spend the most time swimming in the open, munching on algae. Rabbitfish are mostly overlooked as aquarium fish, except for the Foxface. This is despite their vast distribution in the wild.

Since Biota Group began culturing them, there has been a stable supply of captive-bred Rabbitfish for our hobby.

Biota has been growing Goldline Rabbitfish because they are perfect for the aquarium trade. Furthermore, captive-bred fish are far less likely to carry pathogens. Wild-caught fish can carry gill flukes or parasites like Cryptocaryon.

If you thought tangs were good at eating algae, just wait until you’ve seen a hungry Rabbitfish! They won’t eat every variety of nuisance algae. Still, Rabbitfish will devour most filamentous, film, and turf algae. More than an army of cleanup crew inverts, we rely on Biota’s Goldline Rabbitfish to maintain coral flats and keep our tanks algae-free.

They are peaceful fish

It’s always a gamble keeping multiple tangs in the same tank. Aggression really depends on the surgeonfish species. Other factors like the order they are added to the tank can also be key. But this is not the case with Rabbitfish! They are very social reef fish and are not very territorial or hostile. They are ‘neutral’ in the social pecking order of other marine fish. Most tangs will not cause them any problems so long as they have ample space.

They add color and interest to the aquarium

Rabbitfish are not flashy or showy fish at first. They begin their lives as small colorless silver fish. As they mature, Goldline Rabbitfish acquire a grid of metallic lines on the body. They also develop patches on the tail that turn blue as they age. Sections of their body and tail turn greenish to golden in color. Goldline Rabbitfish display beautiful colors and patterns once they reach adulthood.

Rabbitfish are hardy fish in the wild and in captivity. Juveniles grow up in coastal estuaries and brackish water in nature. Thus, they’re conditioned to handle swings in water parameters. This is also why Goldline Rabbitfish are a good choice for beginners.

Be mindful that Rabbitfish can grow to massive adult sizes. They would not be suitable for a nano or even a tank smaller than 125 gallons.

Why we teamed up with The Biota Group

Biota is changing the aquaculture industry with bold innovation. They have made a commitment to ocean conservation and restoration. The Biota Group is creating new methods for sustainable aquaculture. They are also making a positive impact on the aquarium trade, food security, and conservation.

Like AlgaeBarn, The Biota Group believes in giving back to the ocean rather than just taking from it. Simply put, Biota fish are better adapted to captive life after growing up in a nursery. Their method eliminates the need for wild collection and harvesting of fish from the reefs.

Biota has already cultured over 100 species of fish. This growing list includes endangered, uncommon, and exotic species. They’ve also had world-firsts such as the Borbonious Anthias, Bumphead Parrotfish, and Clown Triggerfish.

Biota’s method for aquaculture begins with egg collection. Many reef fish deposit hundreds of millions of eggs per day during spawning. Most eggs are eaten by other fish, with only 0.01% surviving to adulthood. The Biota Group devised a unique method for collecting some of those eggs in Palau’s waters. After years of studying fish behavior, they can collect eggs seconds after fertilization. 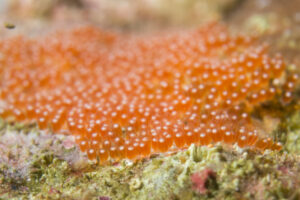 It is more challenging to catch smaller species of fish mating in the wild. Therefore, it is easier to collect a few pairs and place them in large, cozy aquariums where they can settle in. Biota’s collection method places minimal stress on the fish. This is because the time between collecting and introduction is usually only a few hours. Biota Palau is an outdoor facility with big tanks that receive a lot of fresh seawater and sunlight.

These fish adapt fast and begin mating in ten to twenty days. Every year, they can acquire hundreds of eggs from these fish. Species like Anthias, Coral Beauties, and Mandarins are now descending from the first generation they nurtured. The young fish multiply and are ready to be sold in 3-4 months.

When the fish are ready, they are carefully transported to Biota’s facility in Florida. This is where they will be thoroughly acclimated and quarantined for at least 20 days. This process gives us more robust and attractive fish that are better suited for reef tank life.

One of the most important reasons why Biota is joining our World Oceans Month celebration is they are already making good on their promise to reef restoration. The Goldline Rabbitfish is the main food source for the people of Palau. Sadly, their numbers have declined due to overfishing. So, Biota made a commitment to return Goldline Rabbitfish back to the waters of Palau. They have introduced over 100,000 Rabbitfish to date. 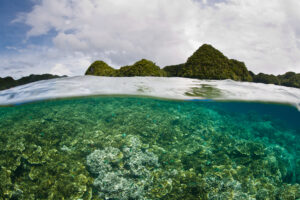 Biota’s Goldline Rabbitfish are incredibly hardy and beautiful. This ravenous herbivore is especially great for larger systems with algae issues. Of course, additional precautions must be taken with these fish, as with other species.

Rabbitfish are venomous like Lionfish. Please take precautions to avoid their spines. They must also be adequately fed to avoid the occasional nip at coral. Goldline Rabbitfish love Sea Lettuce so a well-stocked fuge is a huge benefit!