You are here: Home / Clean Up Crew / Goldline Rabbitfish: Most Underrated Reef Fish Ever?

Oddly, rabbitfishes (Family Siganidae) have never really been hugely popular in the marine aquarium hobby–not with reef aquarists nor with fish enthusiasts. For sure, there has never really been a “holy grail” siganid. This could definitely strike some longtime fishkeepers as downright surprising, as rabbitfish are hardy, reasonably social, active and attractive. For sure, the goldline rabbitfish possesses all of these great attributes. And now, thanks to Biota, they are available to home aquarists as captive-bred specimens!

We here provide an overview of this bold and beautiful fish. 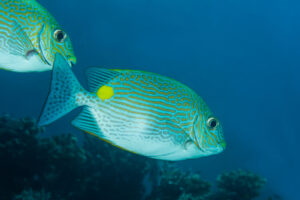 The goldline rabbitfish (Siganus lineatus) is also referred to as the lined rabbitfish or golden-lined spinefoot. It occurs in the tropical Indo-Western Pacific  from the Maldives, India and Sri Lanka to Japan, Philippines and Indonesia to New Guinea and the northern Australian coast. A similar species that occurs in the northern Indian Ocean was described as S. insomnis in 2014.

The goldline rabbitfish reaches a maximum length of 43 cm (17 in); however, something like 25 cm seems to closer to the average. The smallest female ever observed to spawn was 23 cm, while the largest was 33 cm. This fish probably does not spawn until reaching two years of age.

Its dorsal color is bluish and its ventral color is silvery. Golden stripes run along its sides, breaking up into spots near bases of the fins and caudal peduncle. Blue lines run over the cheek and gill cover. The species is similar to the widespread cousin S. guttatus with its diagonal line across the face; it differs from S. guttatus in having lines over the body instead of spots. A rather large, conspicuous yellow spot sits under the rear of the dorsal fin. When sleeping or threatened, it exhibits a “fright” color stage that consists of six dark and six light patches.

It has a single row of flattened teeth that are adapted for scraping at seaweeds. This allows it to strip algae from rocky crevices, between coral branches, etc. Its upper jaw is fixed; only its lips can move in a nibbling motion. Like many herbivores, its stomach is rather inefficient while its intestines are extra long.

Goldline rabbitfish in the aquarium

Rabbitfish are quite similar to tangs, particularly in their herbivorous behavior. They differ from tangs in that they are far less prone to external parasitic infestations. While they are as robust as angelfish, they don’t have as much “bad attitude.” While they resemble butterflyfish in many respects, including their spiny finnage and golden hues, they are far hardier. 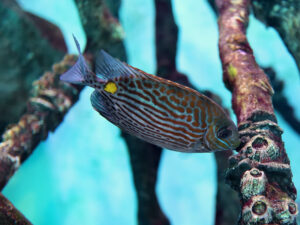 A very notable difference between these fish and similar reef fish fishes is their social nature. Rabbitfish actually get along with each other! While they are fine alone (especially as adults), they might enjoy the company of their own kind in captivity as well as in the wild. Of course, even a small school of these large, active animals would require the space of a gigantic tank, but would be a sight to behold indeed.

Meeting the goldline rabbitfish’s or any rabbitfish’s diet in captivity is a double-edged sword; on one hand, they readily eat nuisance algae such as hair algae, while on the other hand, they require generous supplemental feedings of green foods such as nori. Alternatively, they absolutely love discarded live macroalgae from the refugium. A variety of green and red algae is ideal. Whatever the exact diet, it is important to feed this species often to keep it plump and healthy.

While generally regarded as reef-safe, the goldline rabbitfish is reported to take the occasional bite (or maybe even a lot of nibbles) at both soft and hard corals. While the risk of heavy coral-eating is low, it certainly is worthy of consideration. The best means of preventing this bad habit is simply by providing plenty of their preferred food, seaweed!

Captive-bred specimens of the goldline rabbitfish are exceptionally resilient and are quite pretty. Aquarists that hate hair algae might really love this voracious herbivore. Of course, as with any species, there are special precautions with these fish.

Firstly, one must always take care to avoid the painful sting of their spines. Also, they must be kept well-fed to prevent weight loss and predation of corals.

With just a little bit of attention, the goldline rabbitfish can add a lot of activity and color to a larger sized marine aquarium. For sure, it has yet to receive its due praise in the hobby!