You are here: Home / Captive Bred Fish / Angelfish / The Scribbled Angelfish: King of the FOWLR Tank 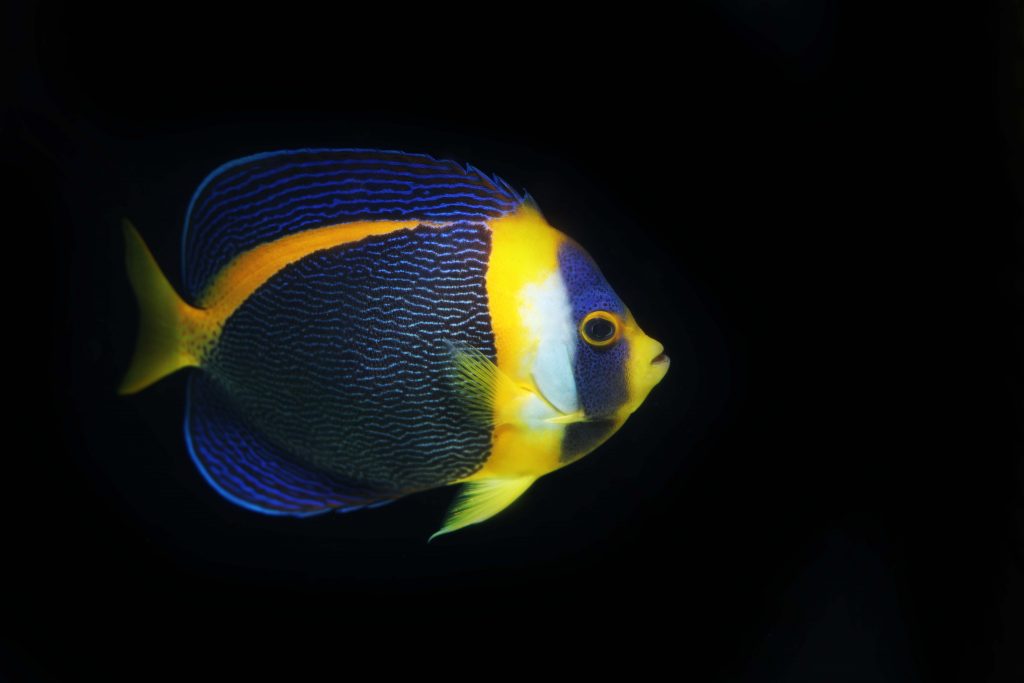 In many respects, the previous generation of marine aquarists got a raw deal; they caught just a teasing glimpse of what a reef tank could be–having access to a few hardy (generally soft and LPS) coral species–while not yet having access to the knowledge and advanced equipment we take for granted today. True, it was frustrating to see photos of acres of brightly colored Acropora while we couldn’t keep a mere stick of it alive for long. But hey, at least by then we had live rock. That alone made our tanks look so much reefier than the hideous bleached coral skeletons we dropped over a bed of crushed coral gravel.

Though we weren’t necessarily doing so purposefully, those of us with that newfangled living rock were effectively recreating rubble zone environments. Looking back, in their own right, those tanks weren’t all that bad. They could still house a few cool, robust inverts like reef lobsters or chocolate chip starfish (hardly “reef-safe” inverts, right?). If the lighting was half-decent, we might even display a Condylactis anemone or a big colony of mushroom anemones. The most highly prized feature of this author’s first “reef” rocks, acquired some 30 years ago, was a colony of small, brown anemones–in retrospect, probably Aiptasia.

But aside from the obvious–the glaring scarcity of corals–the only really big, conspicuous difference between those systems and the typical contemporary system is in the choice of fishes.

Yes, there was actually a day when we could buy a fish simply because we loved it, without any worry that it might consume a couple thousand dollars’ worth of corals later that evening. But then we started filling our tanks with thousands of dollar’s worth of corals. Slowly but surely, once-beloved fishes like lunar wrasses, clown triggerfish and porcupine puffers became relative rarities. These often super-sized (albeit low-maintenance) fish were eventually relegated to an ostensibly “beginner” type of aquarium, the fish-only-with-live-rock (FOWLER) tank.

Few of the not-reef-safe fishes took a harder hit to their popularity than did the large angelfishes. This was especially so of the Pomacanthus spp. angels (P. imperator, for example). But this also included other, less frequently imported, genera of large angels such as Chaetodontoplus spp.

Without a doubt, corals, clams, and so many other delicate inverts are very pretty. And quite a rewarding challenge to keep; they’re obviously living up to everything yesteryear’s hobbyists dreamed they’d be. In the midst of this coral craze, FOWLRs have hardly been the subject of much serious attention. But that is finally starting to change. Funny how things always seem to eventually come back in style…

Like, come on, who wouldn’t enjoy handfeeding a big showpiece fish that they raised from a wee fingerling? Given the wonderful “personalities” of many of these fishes, it’s not at all surprising that they’d be enjoying a bit of a comeback by now. But there are a number of factors that have contributed to this resurgence. Of these, perhaps the most significant is the recent availability of captive-bred specimens.

Rising from the rubble

Though ornamental marine fish farmers once focused on reef-safe species, some of the big old carnivorous hulks we remember and love are now in commercial production. This is especially exciting as the list now includes some of the notoriously finickier species such as pinnatus batfish, blue lined sea bream, and so on. Best of all, it includes some of those rarer, large angelfish. 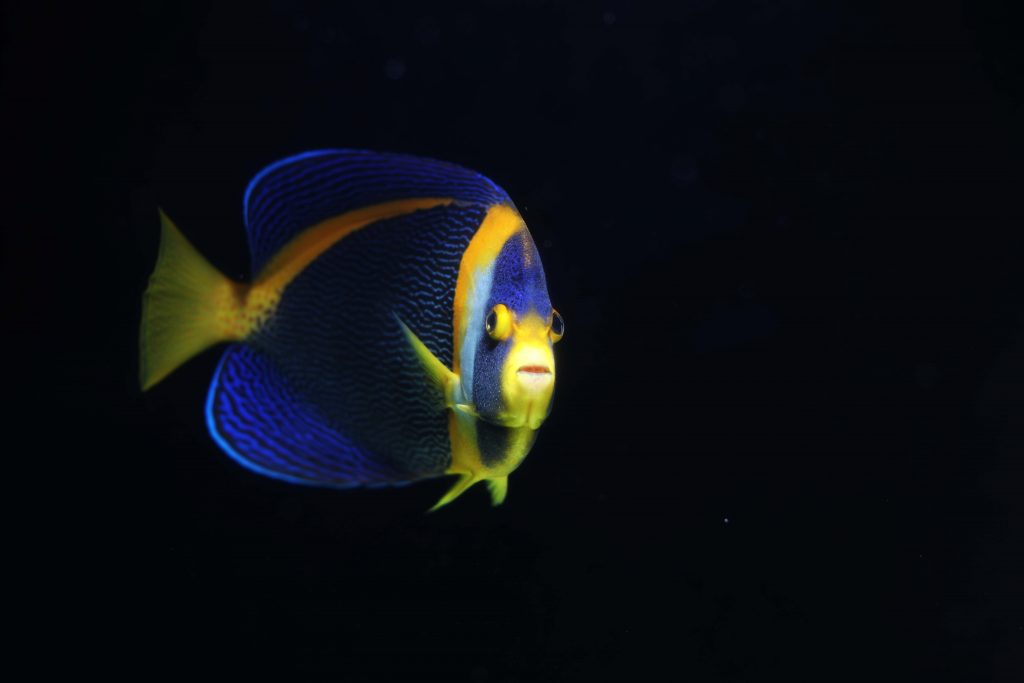 The recent availability of BIOTA captive-bred scribbled angels (Chaetodontoplus duboulayi) is particularly exciting because these cultured specimens are proving far hardier than their wild counterparts. Quite notably, they are far less likely to succumb to (and spread) deadly parasitic infestations such as marine ich (Cryptocaryon).

And what a beauty this fish is. Even the juvies are attractive little aquarium fish. These cultured specimens are imported and sold at around two inches (much smaller than we’re used to). Generally, all are females until reaching a size of about five inches. At this time, some individuals turn into males.

For the long haul

This is a fish that (unlike many other large species) just gets prettier and prettier as it grows. And it gets pretty big: To almost a foot long. A dedicated fish lover could fairly easily raise one of these farmed specimens from a couple inches to its full-sized glory. So long as it’s not kept with fish that can swallow it, it usually competes well with the tough guys and can be grown alongside young predators such as puffers, moray eels, tuskfish, etc.

However, this fish absolutely cannot be trusted with corals, clams, sponges, etc. and despite anything anyone tells you, it should not be kept in a reef tank. It does make a very fine addition to a FOWLR system of >180 gallons. In fact, a FOWLR may be perfect, as this species prefers rubble-strewn sandy flats in the wild.

Of course, most fishes benefit from a high-quality, highly varied diet. But the scribbled angelfish is an omnivore that demands such. In addition to all sorts of meaty foods, the keeper should include macroalgae and a specialized angel feed that incorporates sponge. That’s right; all this gorgeous species needs to live a long, healthy life in captivity is a spacious FOWLR tank and a hearty, wholesome diet!