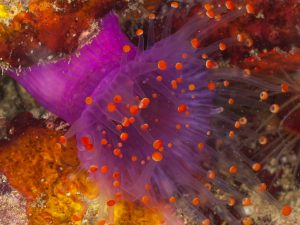 No one starts a saltwater aquarium because they hate challenges. Indeed, it is the difficulty (or at least perceived difficulty) of maintaining these systems that is so alluring to many first-time marine aquarists. That being said, it’s always good to take the stroll towards full-blown reefkeeping in baby steps. Veteran hobbyists have seen it so many times–newbies who don’t believe that water quality, lighting, etc. really matter that much until their inadequate systems present them with decisive, stinging failure. Just seems that some of us have to learn the hard way!

Well, here’s one to grow on: Start with comparatively hardy cnidarians before you go in over your head with delicate corals. For this purpose, we here suggest mushroom anemones.

This doesn’t mean that you’ll have to (God forbid) sacrifice color nor wait forever to acquire your first hardier coral species. It does mean that you can proceed, step by step, towards increasingly sensitive types of corals. Success with these “test specimens” does not necessarily guarantee eventual success with corals; however, an unsuccessful attempt to keep mushroom anemones is a strong indication that the system is not yet adequate for corals.

So, what are mushroom anemones and where do they come from?

Mushroom anemones (Order Corallimorpharia) occur widely across deep and shallow, temperate and tropical seas. They are something between a stony coral and a sea anemone. Stony corals are, in fact, much more closely related to corallimorpharians than they are to soft corals. Actually, despite completely lacking a stony skeleton of any kind, the corallimorpharian polyp is structured quite similarly to that of stony corals.

Corallimorpharians are capable of sexual reproduction but overwhelming proliferate asexually through budding or splitting. Growth rate is partly dependent upon factors such as temperature (season), but is generally very high. Some genera (e.g. Discosoma) reproduce more rapidly than others (e.g. Ricordia). As many (though not all) mushroom anemones are zooxanthellate, light intensity is often a major factor in in their growth.

Mushroom anemones are capable of movement, though it is incredibly slow (like, on the scale of millimeters per month). This means that they pretty much stick around where they are “born.”

Even so, they can disperse across large areas and cover sizable sections of reef rock due to their rapid asexual reproduction. Thankfully, they tend to get along with each other quite well when growing in these dense clusters (this is especially so amongst groups of clonal relatives). If fact, corallimorpharians are not particularly aggressive in general (only Discosoma and Corynactis are known to engage in aggressive interactions among themselves and with neighboring animals). 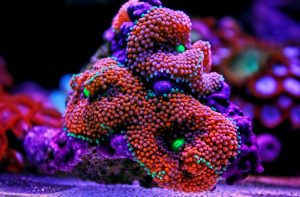 Yup… This section will be pretty short, as mushroom anemones are quite easy to care for. Of course, some genera are easier to care for than others. We therefore suggest starting with the very hardiest (e.g. Discosoma and Rhodactis) before moving on to the more delicate ones (e.g. Ricordia and Amplexidiscus).

Corallimorpharians are typically very easy to handle and place in the tank, as they generally are purchased already firmly attached to a small rock. This does pose a small risk of introducing pests, so carefully examine the rock for unwanted hitchhikers (such as parasitic flatworms) before putting it in the tank. Since they’re not particular about placement, keepers often put them in less precious real estate such as over the tank bottom.

Mushrooms love moderation. Thus, they don’t like their water flow to be too weak nor too strong. They don’t like their lighting to be too weak nor too strong. They’re even alright with a little bit of dissolved nutrients in the water (especially nitrate), so long as they’re not super high. The only thing they seem to be “picky” about is that they strongly prefer that you actually maintain pH within optimal reef tank ranges (8.2-8.3).

One problem with a hardy coral or coral-like animal (e.g. mushroom anemone) in the hands of a cheap/lazy aquarist is that even though the animal might survive the dirty water, such conditions encourage the lush growth of nuisance algae which can irritate and eventually harm the animal. Sure, these corals are pretty rugged as far as marine inverts go. But still, even if you keep them in a low-budget FOWLR type system (which is certainly possible with adequate lighting), you’ll probably still need a good clean-up crew to control benthic algal growth.

In even a half-decent system and with minimal care, an aquarist will find corallimorpharians to be rather simple to keep overall. In fact, in some systems that are poorly equipped and poorly maintained (weak lighting and high nitrates, for example), they might actually grow like weeds and become somewhat of a pest. Thankfully, if you experience runaway success with your mushrooms, you can cull them by removing the rocks and rubble to which they are attached; especially if they have novel colors, other hobbyists are often eager to use these “discards” to add to their own collections!