Welcome to Conservation Week! Although we talk about conservation and sustainability on the regular here at AlgaeBarn, we are going the extra mile this week! In this post, we are going to discuss how aquaculture has a positive impact on conservation efforts. Aquaculture is obviously very near and dear to our hearts as hobbyists. But at AlgaeBarn, we want to know that the work we do here in the Rockies is making a difference across oceans. So, let’s get started!

The breeding and raising of fish, shellfish, and aquatic plants is known as aquaculture. It’s basically farming done in the water. Aquaculture in the US produces food and commercial products. Aquaculture also contributes to the creation of healthier habit 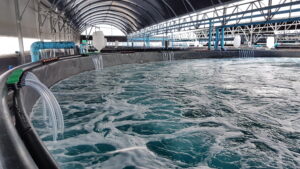 ats. And it has been a successful method used to rebuild fisheries or boost populations of threatened or endangered species.

When done responsibly, aquaculture has massive economic potential. Not only is it a way to produce food, but this provides income to many rural areas. In the case of shellfish or seaweed aquaculture, it helps the recovery of lost or vulnerable ecosystems.

Harvesting live rock and coral has been prohibited in almost all the continental US. Mostly because it takes so long for coral reefs to regenerate but it is also a very destructive practice. As reef keepers, we know how slowly stony coral grows. Especially those SPS corals that are responsible for building reefs. The National Oceanic and Atmospheric Administration stated that the annual growth rate of a reef is measured in centimeters. Healthy and robust coral reefs can generate employment, boost tourism, and sustain fisheries. It has even been estimated that coral reefs provide $375 billion in economic goods and services each year. 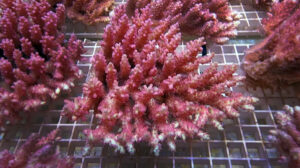 Keeping coral reefs protected is the only way we can help conserve this resource for future generations. Through supporting coral aquaculture, we can achieve this goal. And if the reef aquarium trade continues to promote captive breeding programs, the demand for wild harvested coral is reduced. Today, it is possible to have a reef tank stocked with fish, coral, inverts, and macroalgae that are 100% captive grown.

What exactly are marine ornamentals? Marine ornamentals are simply reef fishes and inverts that are not typically known to be sources of food. At AlgaeBarn, we know that the aquaculture of inverts and ornamental fish is the solution to many issues in the hobby. Dangerous and harmful collection practices like the use of cyanide or explosives, show the dark side of the hobby. We think that most reef keepers oppose collection methods that harm natural coral reefs. That’s why we team up with aquaculture facilities like Biota and ORA.

We are proud to support our friends at Biota

Biota is a global leader in sustainable aquaculture practices. They have created eco-friendly methods of raising fish and inverts for the reef keeping hobby. Biota also plays a huge role in improving food security and conservation. Their mission is to give back to the ocean while taking nothing away from it. In fact, for every captive bred fish Biota sells, they release a rabbitfish to the waters of Palau to help repopulate the fishery.

Biota’s aquaculture facilities are designed for sustainable captive breeding of marine life. By choosing captive-bred species, we generate income in the remote regions that would otherwise rely on wild collection. Biota’s fish are raised in nurseries using sustainable methods. They have successfully bred over 100 fish species. During spawning events, most marine fish lay hundreds of millions of eggs per day. Many of those eggs are eaten by other fish, and only 0.01% of those eggs will survive to maturity.

Biota’s aquaculture specialists can collect fish eggs just seconds after they are fertilized. This method is one of the least harmful ways of obtaining gametes from the widest variety of fish. Although it takes a lot of effort and manpower, Biota’s survival rates of wild gamete culture make it worthwhile.

Smaller fish are much more difficult to catch spawning in the wild. So, it is easier to collect a few pairs and house them in large tanks where they can spawn in safety. These fish acclimate quickly and usually begin spawning within the first few weeks. Every year, thousands of eggs are produced by these fish.

Biota raises their fish and inverts in both indoor and outdoor aquaculture farms. They have a large outdoor facility in Palau with tanks that ge 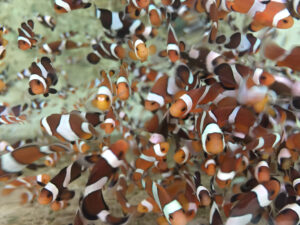 t plenty of natural seawater and sunlight. All of this happens relatively quickly as young fish grow fast and are ready for transport in just a few months. When the fish are ready, they are transported to Biota’s facility in Florida. Here they are acclimated and quarantined for a few more weeks. This is just one of the ways Biota ensures their fish and inverts are healthier and hardier.

Biota’s fish and inverts are then distributed to pet stores throughout the United States and Europe. Because they are raised in captivity for hobbyists, Biota’s fish are less likely to become sick during acclimation procedures. These fish are also adjusted to eating prepared foods like pellets. With wild caught fish, sometimes they refuse to accept prepared foods in captivity. Sadly, this leads to fish that are more prone to disease and starvation.

Why we teamed up with ORA

ORA is the largest aquaculture facility for ornamental marine animals in the US. They culture over fifty of the most popular species and varieties of fish for reef keepers. In addition to fish, ORA raises inverts and live foods. ORA’s hatchery is located at the Harbor Branch Campus of Florida Atlantic University in Ft. Pierce, Florida. They are also working on new techniques for more captive bred specimens to conservation-minded reef keepers.

ORA captive bred fish avoid the distress of wild capture, handling, and transport. These fish are raised in an aquarium their entire lives, so they are extremely hardy and easy to acclimate. The color and vitality of ORA fish are unrivaled in the hobby. ORA’s aquaculture specialists feed their fish a nutritionally balanced diet that helps promote vibrant colors.

ORA is proud to have been at the forefront of conservation efforts around the world. In addition to their work in aquaculture, ORA’s support has been crucial in animal rescues. During an extreme cold front in 2010, hypothermic sea turtles were washing ashore on the coasts of Florida. ORA cooperated with the FL Fish and Wildlife Conservation Commission and the US Fish and Wildlife Service to house hundreds of cold stunned sea turtles. 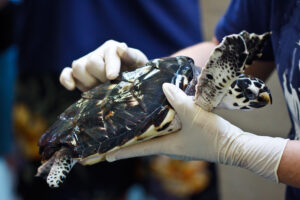 ORA has also collaborated with other agencies to restore natural coral reefs. In 2002, ORA teamed up with Disney Wildlife Conservation Fund and Florida Keys National Marine Sanctuary to repopulate a damaged reef in Key Largo, FL. This was also the first-time captive grown corals were transplanted back to the reef in the US! Around twenty sea fan coral outplants were successfully restored to a natural reef.

As we all know, macroalgae has a variety of uses in reef tanks. One common reason for growing macro in the reef tank is as a food source. Tangs and other herbivores enjoy eating fresh algae. Fresh macroalgae contains compounds that can help to prevent Head and Lateral Line Erosion (HLLE). HLLE is a common long-term care issue seen most often with Angelfish and Tangs.

The second more popular reason for keeping macro in a reef tank is for use in refugiums and algae scrubbers. Here, the macro absorbs excess nutrients in the system. Compounds like nitrates and phosphates are soaked up by macro. It can also contribute to the survival of small shrimp, pods, and other microfauna.

These are all examples why macro is being cultivated in aquaculture settings. There is promising evidence that culturing macroalgae like Red Ogo can have huge impacts on the environment. Seaweed farming has also shown potential to reduce toxic algae blooms.

Just like in the reef tank, macroalgae can help remove excess nutrients from polluted coastlines. This can help reduce the toxicity of algae blooms in these areas. Research is also showing that farming macro and shellfish together has potential to improve water conditions in the oceans.

At AlgaeBarn, part of our mission is to share awareness of conservation and we are going above and beyond this week! We hope this post about aquaculture and conservation has inspired reef keepers to buy captive bred whenever possible. As hobbyists, aquaculture is obviously very close to our hearts. However, at AlgaeBarn, we want to know that the work we do in the Rockies is making a difference across oceans.