You are here: Home / Advanced Education / Comparing the Metabolic Modes of Aquarium Organisms

Few, if any, of us get “into” aquarium keeping to become marine ecologists, or become experts in metabolic processes. But it does happen, albeit over some time. We buy our first fish tank with the sole intention of keeping colorful animals–simple as that. We do soon learn, however, that an aquarium system is really a tiny ecosystem, and that there are many ecologically essential members of the biological community aside from the “ornamental” organisms we acquire. Indeed, before we can even safely introduce creatures like fish and coral, we must establish diverse populations of beneficial bacteria. Not-so-far down the road, we might introduce plant life (e.g. macroalgae) to further enhance the captive habitat. We may, at some point, even experiment with various concoctions/inocula to manage beneficial microbial or algal blooms.

What we’re talking about here is a distinction between two very different endeavors; one is for collectors, who simply enjoy keeping pretty or unusual things (and perhaps boasting of owning them), while the other is for biologists and naturalists, who find the pursuit of scientific knowledge gratifying in and of itself. It’s worth repeating here that this is a spectrum, and most of us tend to start at the former and end at the later. Along the way, it is imperative that we develop our understanding of stuff like food chains, nutrient cycles, and so on. And that means that we have to understand the differences between the different metabolic modes. 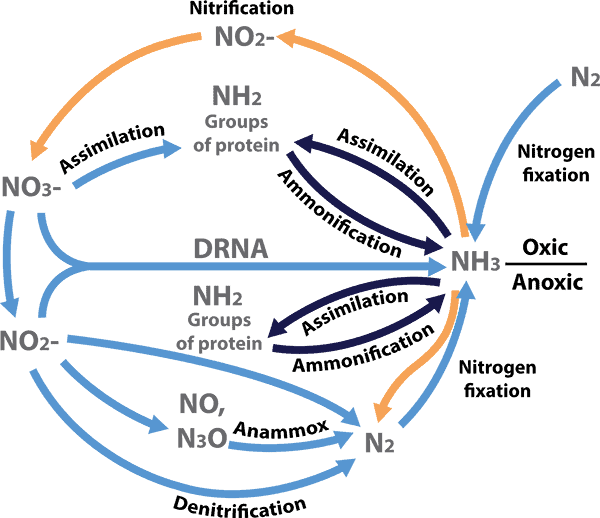 It is in encountering our first water quality issues or hair algae plague that we are rudely introduced to the concept of production and consumption, and metabolism. That is, plants use inorganic sources of energy to produce biomass; herbivores, and then carnivores, consume and re-consume this biomass, along the way generating wastes (excrement, secretions, carcasses, etc.) that are broken down (i.e. mineralized) into inorganic “nutrients” that can again be taken up and utilized by plants. This basically is a duality of autotrophs (organisms that are able to form organic substances from simple inorganic substances such as carbon dioxide) and heterotrophs (organisms that derive their nutritional requirements from complex organic substances).

While all true, and important, that’s just a gross simplification. If you’ve been reefing for very long, you’re already aware that marine food webs are considerably more complicated than that. There are actually four basic modes of metabolism. This quadripartite system takes into consideration specific energy source to give us the following:

Even this isn’t very cut-and-dried. Thus, many organisms are classified as mixotrophs. These are capable of switching between different metabolic modes in response to changing environmental conditions. Most mixotrophs, while metabolically complex, are generally unicellular and morphologically simple. As they are more flexible than either photoautotrophic or chemoheterotrophic organisms, mixotrophs often dominate their habitat. It is said that more than half of all microscopic plankton are mixotrophic!

You are what you metabolize

Some systems of metabolic classification go a little deeper and take into consideration the main sources of reducing equivalents. Electrons or hydrogen atoms from reducing equivalents (electron donors) are needed in the environment by both phototrophs and chemotrophs; the electrons or hydrogen donors are obtained from the environment. These reduction-oxidation reactions transfer energy obtained from light or chemical reaction into more biologically useful forms of energy. Lithotrophs use inorganic compounds as electron/hydrogen donors, whereas organotrophs use organic compounds as electron/hydrogen donors.

Another meaningful and rather interesting distinction between different groups with respect to metabolism is the electron acceptor used. This includes three processes through which organisms break down glucose into a substance that the cell can use for energy. Each produces adenosine triphosphate (ATP), the primary energy carrier in all living things. 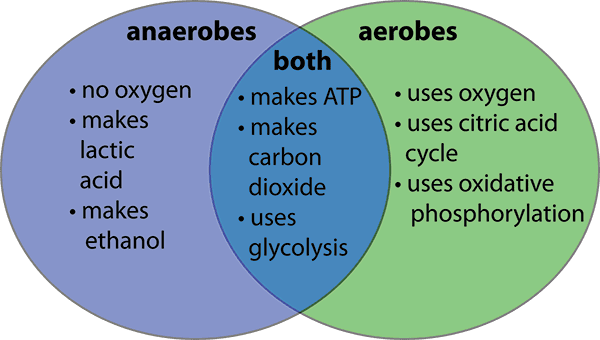 These processes, namely, are:

Both aerobic and anaerobic respiration utilize highly reduced substances (e.g. NADH and FADH2) to establish an electrochemical gradient (often a proton gradient) across a membrane; proton motive forces drive protons across the membrane–down the gradient. This creates a current that forms ATP from ADP (adenosine diphosphate) and inorganic phosphate.

Rather than using an electrochemical gradient, fermentation only uses substrate-level phosphorylation to produce ATP. That is, NAD+ (the electron acceptor) is regenerated from NADH formed by the reduction of oxidized compounds typically formed during the fermentation pathway itself.

Where the right sort of environment exists, all three metabolic processes can occur in very close proximity (e.g. in a deep sand bed). There even appears to be a hand-off of metabolites along the way. For example, aerobically respiring, nitrifying bacteria might inhabit the well-oxygenated portion of a substrate. Further below, denitrifiers perform anaerobic respiration. In even deeper parts, other anaerobic microbes such as methanogenic archaea perform fermentation. Each step–from aerobic to anaerobic respiration to fermentation–is increasingly less efficient. However, each step forwards the complete cycling of nitrogen, iron, sulfur and carbon through the reduction of the oxyanions of nitrogen, sulfur and carbon to less-oxidized compounds.

For advanced aquarists, there is no end to the manipulation that can be made to favorably alter trophic interactions within their microcosms. But having a basic understanding of metabolism undoubtedly helps in assessing and controlling the going-ons in your tiny ecosystem. That, and it makes it all a whole lot more interesting to observe, too!