You are here: Home / Refugium Education / Building Your Mangrove Biotope

Ahhh, the planted refugium… It’s become something much bigger and much more engaging than the mere “filter” it was just a few years ago. Where we once were happy just to keep a big wad of chaeto or some such seaweed in an otherwise empty tank, we moved on to try a broad variety of macroalgae species in “planted” tanks, and then began to experiment yet more with mangroves. Now, a few hobbyists have gone so far as to set up dedicated mangrove-dominated biotopes. And why not? It’s hard to imagine a stranger type of ecosystem. Think about it… How many indoor gardeners out there cultivate plants in saltwater? Much less plants that can potentially grow as tall as the house itself?

Sure, reef aquarists have been poking mangrove propagules into their sumps and the backs of their display tanks for a couple decades. But the emergence of dedicated mangrove forest tanks are pretty new. The sheer quality of the some of the displays you’ll see on aquascaping forums, Facebook biotope aquarium-themed group pages, etc. is unlike anything we’ve witnessed before. Drink it all in folks, we live in some pretty damn exciting times.

This article, quite admittedly, is light on specific instruction or hard data and is heavy on fun and imagination. Let’s face it; at this point, there are no strict rules (let alone guidelines) for keeping mangrove tanks. They’re still so new! But since the best model for such a system is the natural environment that mangrove actually come from, we’ll start right there. 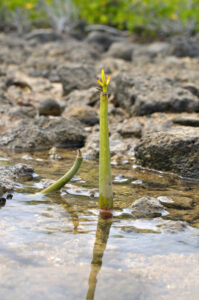 Mangrove-dominated forests or shrublands, known as mangals, occur in brackish and saltwater intertidal flats. To be clear: Mangroves do not require, or even prefer, salty water. They rather are equipped to tolerate saline environments. And this tolerance is key to giving them a critical edge in competitive interactions with other plants. Moreover, their adaption (specifically their root systems) to the anoxic muds of estuaries and shallow bays confers yet another such advantage. In many cases, there simply are no other true plants present to compete against! While marsh grasses (e.g. Spartina) do indeed thrive in these conditions, they are restricted to temperate regions; mangroves take their place in the tropics and subtropics (predominantly between the 5° N and 5° S latitudes).

One of the reasons that mangroves can flourish in these environments is the richness of the “soils” there. Sure, these swampy bottoms are salty and depleted of oxygen. But they are also loaded with nutrients and minerals. Being formed from the deposition of fine (often highly organic) sediments in areas of weak water movement, mangal substrates are generally very soft and squishy; consequently, most mangroves produce special “anchor” roots to help the plant to stay secure in the face of unusually high winds or the occasional big wave.

There are over a hundred tree and shrub species that are referred to as “mangroves” on account of their ability to grow in salty water. However, mangals are characterized by a low diversity of vegetation; these places are typically dominated by just a few (if not a single) mangrove species. Most mangals include a member of the genus of “true” mangroves, Rhizophora.

On the other hand, mangals host a freaking ginormous diversity of fauna from fish, crabs and oysters to bugs, lizards and birds. Indeed, their location in sheltered areas, as well as the protection their tangled roots and stems provide, makes them an ideal nursery for all sorts of wildlife. In many cases, animals from very distant and very different habits live out their days of early development in the relative safety of the mangal.

A Tank Fit for a Tree

Needless to say, there are long-term challenges to growing mangroves due to the large size they attain; they’re trees, after all. There are just a few ways to deal with this reality. The first (reserved for owners of huge houses shared with easy-going spouses) is to follow nature–to let the tree reach its god-granted stature. For this option, one might provide a tank (or trough, really) that is at least three feet tall and six feet wide–at least. A specimen housed in this manner would almost certainly be illuminated naturally in an atrium.

Okay… maybe you want to go for something a bit more modest. Another option is trimming to produce a sort of bonzai mangrove. Considering the slowish growth rate of most mangroves, this is totally feasible. But if you really are working in a tight space, you can simply uproot the entire tree and replace it with a new little propagule every year or so.

The growing vessel can be either independent or connected (much like a refugium) to another system. To date, most mangroves have been displayed in refugia that are associated with reef aquaria. This type of exhibit is rather inviting for small coastal marine fishes such as the whitespotted pigmy filefish and the Link’s goby as well as inverts like peppermint shrimp and nassarius snails. Ornamental seaweeds such as certain Gracilaria make a nice-looking accent here. 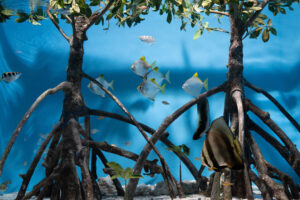 Arguably, the coolest mangal biotopes created in recent times have been brackish systems. In these, one may add certain aquarium “botanicals” to stain the water. There is a surprising number of great fish choices here, including brackish moray eels, puffers, monos, scats, mudskippers, wildtype sailfin mollies, archerfish, anableps, and many more.

And yes, mangroves can be used in freshwater planted tanks (this author has enjoyed some success growing Rhizophora in a freshwater paludarium). It’s probably possible to plant mangroves in the wet sections of a larger terrarium designed for amphibians and aquatic reptiles.

Alright, and if you’re happy to just drop a propagule into your overflow box every so often, you be you. Just being able to watch a mangrove grow is a real treat!