You are here: Home / Other / Using the Ultimate Aquarium Cycle Kit

One thing aquarists learn from the start–and should never forget–is that the health and survival of all higher lifeforms (fish, corals, etc.) depend upon certain critical microbiological processes. Just like its chemical fingerprint, an aquarium’s microbiological fingerprint (i.e microbiome) has a profound impact on everything from coral disease resistance to nuisance algae growth. Just compare the average reef tank of 40 years ago with one you might randomly scroll across on Instagram today; it’s not at all coincidental that these impressive advancements (especially with SPS corals) were made alongside our growing understanding of microbial nutrient cycling. For sure, past hobbyists would be shocked to see future hobbyists actually dosing nitrogen.

This modern age (some might say a second golden age) of reefkeeping has ushered in a slew of microbial products. Many different species of bacteria have been commercialized for aquarium use. Too often, they are not identified (not even to the level of genus) on the label. And they’re all so very new. We’ve got a lot to learn yet about some of these additives for sure. But it’s pretty safe to say that (1) certain functional groups of bacteria perform absolutely essential roles in natural systems, (2) these same microbes perform similar and equally essential roles in captive systems, (3) these microbes are not always present in sufficient abundance in artificial environments such as aquaria and (4) their numbers can be (and in some cases should be) increased through the use of certain bottled inoculants. 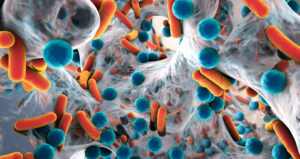 Of the above types of must-have bacteria, the nitrifying bacteria are best known to aquarists. Marine aquarists more or less came to recognize their importance in the mid ‘70s. The stories describing early nitrogen cycling methods might horrify some 21st Century reefers. We’ve certainly refined our methods over the years. Arguably, the use of bottled nitrifying bacterial products has made this process faster and more precise.

But, particularly on a natural coral reef, nitrification plays only a supporting role in nitrogen cycling. These are nitrogen-limited environments where ammonia is generally not oxidized by nitrifiers, but rather is assimilated by heterotrophic bacteria. Prominent among these heterotrophs is a group of mainly photosynthetic, anaerobic bacteria known as the purple non-sulfur bacteria (PNSB). PNSB have been used extensively in aquaculture for decades, but are only now becoming familiar to aquarium hobbyists.

One survey of a healthy reef demonstrated that the PNSB genera Rhodopseudomonas and Rhodospirillum are especially abundant. These are denitrifying bacteria, and so contribute to the maintenance of oligotrophic (i.e. low-nutrient) conditions by converting nitrate into biologically inert nitrogen gas. However, unlike most other denitrifiers, PNSB simultaneously prevent biologically available nitrogen concentrations from “bottoming out” through their ability to fix nitrogen. Nitrogen fixation is essentially the opposite of denitrification; it is the conversion of nitrogen gas into ammonia (which subsequently is used for growth). Because fixation is metabolically costly, these bacteria only resort to it when ammonia/nitrate have been completely depleted from their environment. In fact, these bacteria frequently live symbiotically inside of corals for the purpose of supplying ammonia to their zooxanthellae.

All of this brings us before the precipice of a whole new paradigm in coralliculture. For anyone that seriously studies coral reef nutrient cycles, many so-called “ultra-low nutrient” aquarium systems are nowhere near an oligotrophic state. To the point, conditions that many of us aquarists consider normal are straight-up eutrophic (i.e. polluted with excess nutrients) and/or copiotrophic (i.e. polluted with excess organic carbon). We consequently have to deal with all sorts of problems, not the least being infestations of hair algae, bubble algae, cyanobacteria, and so on. 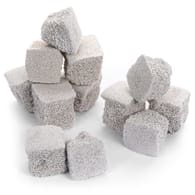 We’d be the first to say that bacterial dosing alone cannot manage every system’s nitrogen cycle (specifically, to maintain true oligotrophy). This is why a smart combination of quality foods, efficient feeding methods, planted refugia, regular water changes, etc. all work together to this end. Bacteria-in-a-bottle are simply another weapon in your arsenal against excess ammonia and nitrate. But they are an especially powerful weapon. Just consider, for example, AlgaeBarn’s Ultimate Aquarium Cycle Kit.

The Ultimate Cycle Kits offer a comprehensive, cost-effective means of establishing large, functional populations of both nitrifying and denitrifying bacteria during the critical early stages of aquarium system maturation. This package includes not only the live microbial cultures but also (1) the ammonium-based “fuel” they need for rapid growth and (2) a suitable high-surface area substrate upon which they can establish lasting colonies.

Nitrifying bacteria require ammonia and nitrite to survive and proliferate; thus, it is necessary to add this fuel via AlgaeBarn’s Nitrocycle. MarinePure® from CerMedia provides both aerobic (outside) and anaerobic (inside) habitable living space. This helps to ensure that the bacteria can establish large, persistent colonies.

The denitrifiers in this package are provided by Hydrospace™ PNS Substrate Sauce™. This product contains marine cultures of Rhodopseudomonas palustris and Rhodospirillum rubrum. These heterotrophs not only eliminate nitrate, but also consume organic carbon (including detritus!). Moreover, Substrate Sauce contains supplemental phosphate which is essential for microbial growth but typically scarce in a new, unstocked system.

The two bacterial groups are quite different from each other metabolically and ecologically. Therefore they do not interfere or compete with each other. In fact, they tend to compliment and support each other, despite living in completely different microhabitats. For example:

These bacteria are referred to by ecologists collectively as “pioneer species” due to their ability to biologically engineer a barren or disturbed environment. Their activities enable the arrival of other types of bacteria at a later time. What eventually emerges is a relatively stable consortium referred to as a “climax community.”

However, while the pioneers are great colonizers, they aren’t necessarily very good competitors. Thus, their populations may decline as newly arrived microbes push them out. That most definitely does not however diminish their importance; without their pioneering activity, it could take months, instead of weeks or days, for a climax community to develop! For an aquarist, this basically means that a much safer environment for livestock can be established a lot faster.

Sure, a handful of sand from someone else’s tank can maybe get your cycle going, eventually, for a few bucks less? Maybe, probably not. Consider that you very likely would also be introducing pests such as nuisance algae or fish parasites (and at the worst possible time, too). And you wouldn’t be adding even close to as many CFUs (colony-forming units) of the targeted bacterial species as you would by adding these highly concentrated bottled products. Not only that, but the Ultimate Aquarium Cycle Kit includes an easily measurable source of ammonium. And it even provides a top-shelf biomedium with crazy huge surface area (1.3-1.7 m2/g). Most significantly, it contains some of the best microbial products in the market which together perform both nitrification and denitrification. All considered, the Ultimate Aquarium Cycle Kit is the most effective and economical tank cycling package available!

Part one of this series took a brief look at the different levels of the Food Pyramid. So, why does it so often look like a pyramid in the first place–with

Read More about Trophic Structure in the Reef Aquarium Part 2

One thing aquarists learn from the start–and should never forget–is that the health and survival of all higher lifeforms (fish, corals, etc.) depend upon

One of the more fundamental tasks one must undertake when maintaining a saltwater aquarium is controlling nitrogenous waste. Most critical is the