You are here: Home / Advanced Education / The Nitrogen Cycle: Part One (Ammonia Oxidizers)

The nitrogen cycle is as important to our aquaria as it is in global biogeochemical processes. Since it truly is a cycle, there is no actual “starting point” or “ending point.” However, in terms of understanding and indeed promoting nitrogen cycling in our captive systems, It is best thought of “beginning” with the most toxic form of inorganic nitrogen: Ammonia.

As nitrogenous organic substances are broken down during digestion by organisms ranging from fish to ammonifying bacteria, excess nitrogen is released into the environment as ammonia. Ammonia is rendered less toxic (though not completely harmless) as it is converted in several steps to nitrate. Different sets of microbes are responsible for carrying out each step. The first step in this process, which we focus on in this article, is ammonia oxidation.

The oxidation of ammonia (NH3) to nitrite (NO2 −) is essential for nutrient turnover in most freshwater and marine waters as well as in soils. The three groups of microorganisms that oxidise ammonia include ammonia-oxidising bacteria (AOB), ammonia-oxidising archaea (AOA) and comammox bacteria (complete oxidation of ammonia to nitrate). These are all aerobic autotrophic organisms. Though another group–the anammox (anaerobic ammonium oxidation) bacteria–can oxidize ammonia under anaerobic conditions, they are phylogenetically and biochemically distinct from aerobic ammonia oxidisers, are of less import in typical aquaria, and will not be discussed here.

By showing that nitrification was inhibited by the application of chloroform, Schloesing and Muntz (1877) provided the first evidence that ammonia oxidation is a biological rather than a chemical process. AOB were first cultured by Frankland and Frankland in 1890. Soon thereafter, Sergei Winogradsky began his groundbreaking work with Nitrosomonas europaea, which serves the model AOB to this day.

Since Winogradsky’s research, nitrification was taken to be a two-step process that is strictly divided between two distinct functional groups; ammonia is first oxidised to nitrite by ammonia-oxidizing microorganisms and then nitrite is oxidised to nitrate by nitrite oxidizers. But that model was made a bit more complex with the discovery of a new process–the complete oxidation of ammonia to nitrate (comammox) by a single microorganism. This dual process was first (and quite recently) demonstrated in 2015 through the cultivation of two Nitrospira spp. (a genus once thought capable only of nitrite oxidation). While we’re still learning more about Nitrospira, it is reportedly as abundant as other ammonia oxidisers in some environments.

Clearly, research shows that ammonia-oxidizing microbial communities are diverse and may change as environments change over time. AOA are far more numerous than AOB in many soil and freshwater environments. Indeed, AOA are now believed to be among the most abundant organisms on the planet (up to 40% of prokaryotes in marine ecosystems and 1%–5% in terrestrial ecosystems. Actually, AOB usually outnumber AOA only in nutrient-rich environments such as wastewater treatment plants, fertilized soils and yes, some aquaria. Whereas terrestrial AOB communities are dominated by Nitrosomonas, Nitrosospira may be more adaptable to marine environments.

So what do all ammonia-oxidisers have in common? Maybe only one thing: The AmoA subunit of the enzyme ammonia monooxygenase (AMO). While AOB, AOA and comammox microbes are all autotrophic, their inorganic carbon assimilation pathways are different. Where ammonia concentrations are relatively low (as in many marine ecosystems), AOA outnumber AOB. Moreover, AOA generally inhabit habitats inaccessible for the AOB (e.g. highly acidic or extremely hot environments).

Introducing ammonia oxidizers to your aquarium

For the safety and comfort of your animals, it is imperative that you fully cycle any system prior to introducing livestock. At one time, aquarists would use hardy, inexpensive, “expendable” fish species to accomplish this task. These unfortunate creatures served not only as a source of ammonia but also as a sort of canary-in-the-mine. 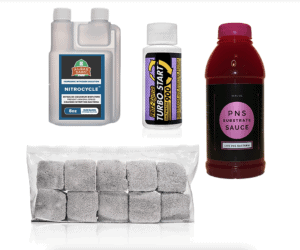 Thankfully, in more recent times, we’ve begun to rely on fishless nitrogen cycle techniques. This involves adding an ammonia source directly to the water. It fosters the development of nitrifying bacteria, which may be introduced through the addition of live rock and/or bacterial inocula. Increasingly, in an effort to reduce the introduction of pest organisms into their tanks, aquarists are starting their systems with dry rock; in these cases, bottled bacteria are practically indispensable in promoting greater microbial diversity and reduced cycling times.

An excellent choice of products for fishless cycling is AlgaeBarn’s tried-and-true Aquarium Cycle Kit. This affordable package includes NitroCycle, a source of ammonia, and Fritz’s TurboStart 900, a consortium of nitrifying bacteria that includes multiple species of both ammonia-oxidizing and nitrite-oxidizing microbes. The aerobic/autotrophic/nitrifying microbes in this product are naturally complimented by the anaerobic/heterotrophic/ammonia-assimilating microbes in Hydrospace’s PNS ProBio. And what to do for yet more thorough system conditioning and more long-term nitrogen stability? For a functionally complete microbiome, including aerobic/anaerobic biomedia (MarinePure) and denitrifying bacteria (PNS Substrate Sauce), simply upgrade to the Ultimate Aquarium Cycle Kit.

Be aware that every aquarium is different and therefore your nitrogen cycle progress won’t be 100% predictable. Test ammonia, nitrite and nitrate often to keep track of the cycle as it progresses. Be aware that you may experience a small, secondary ammonia spike as there is a shift in your microbial community from high-ammonia-loving to low-ammonia-loving species. And, of course, do not add any livestock until both ammonia and nitrite levels have remained at undetectable levels for at least a few days!