You are here: Home / Other / A Look at the Goatfishes

On account of their huge adult sizes, there are a few fish families that should be pretty much restricted to public aquaria (we’ll just kill the goatfish buzz right away). Some of these behemoths (to nearly two feet in length) are in fact better known as game fish. Yup, that would be the goatfish, typically referred to by anglers as the mullet.

Very, very occasionally a marine aquarist will set up a system that is appropriate for fishes such as these. This would be–for starters–really big. Like, in the 250 gallons or much larger range. But that’s not all. It certainly could not be a reef tank as goatfish are anything but reef-safe. Yet, at the same time, a FOWLR tank isn’t all that appropriate either. The reason for this is that goatfish prefer sandy bottoms much more than rocky bottoms. Thus, a goatfish might work well in a tank designed to house soft-bottom fishes such as rays, some sharks, peacock flounders, sea robins etc. An open (i.e. mostly rockless) tank like this might also be used to display large, highly active swimmers like lookdowns, monos, batfish, etc.

If you are among the few who keep saltwater monster fish tanks, then a goatfish might be your thing. This article provides an overview of the family, discusses its captive care in general and then focuses on two particularly attractive and relatively small goatfish species. 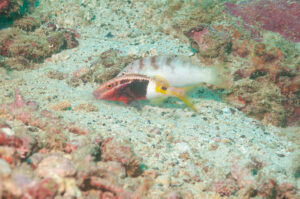 The goatfishes are perciform fish of the family Mullidae. They are often referred to as red mullets (especially members of the genus Mullus) to better distinguish them from a totally different family, the gray mullets (Mugilidae). Mullidae claims six genera and approximately 86 species.

The goatfishes occur in tropical, subtropical and temperate waters. They may be found in a wide range of habitats. Most inhabit relatively shallow waters, though a few prefer the depths. Juveniles very often prefer softer bottoms, generally in sheltered habitats such as seagrass meadows, mangrove forests, etc. Habitat preference (along with behavior, diet, etc.) shifts after a year or so when adulthood is reached.

The family is characterized by slightly elongated bodies and deeply forked tails. The dorsal fins are separated widely. Goatfish have a pair of conspicuous, highly chemosensitive chin barbels which they use while foraging for food. They usually prey on crustaceans, worms, molluscs and other invertebrates that they find in the sand or within small caves.

Goatfish are most active during daylight hours. Some, when not actively foraging, form large schools that may contain members of other species (i.e. bluestripe snappers). Sometimes, other fish follow goatfish as it forages, hoping to catch any prey the goatfish misses.

While goatfish are considered to be hardy when adjusted to captivity, they are subject to transport shock–so be easy on new acquisitions! The challenge in keeping goatfish mainly lies in setting up a gigantic aquarium system. After meeting this demand, these guys don’t present a lot of challenges in captivity; that is, so long as the aquascape is hospitable. What you might think is boring–a large, open expanse of deep sand–is actually heaven on Earth for a goatfish. A tank cover is a good idea, as goats are hyperactive and jumps aren’t completely impossible. 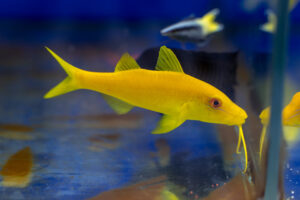 Though you’ll be most likely to keep a goatfish with other large fish species (and that’s fine), just don’t keep them with highly aggressive tankmates. Goats are easy-going and will be hating life if they have to share their space with, say, a triggerfish. Due to their lack of aggression, goatfish are best added to the tank before their tankmates whenever possible.

Goatfishes have the ability to change their coloration during different moods or activities. This, of course, is pretty cool to observe in an aquarium. But overall, goatfish are pretty bland when it comes to coloration. There are just a couple species that are suitable for home aquaria and have reasonably bright colors, the yellow goatfish and the bicolor goatfish.

The yellow goatfish (Parupeneus cyclostoma), also known as the goldsaddle goatfish or yellowsaddle goatfish, is distributed throughout the Indo-Pacific Ocean from the Red Sea to South Africa and the Hawaiian Islands to southern Japan. It is pretty adaptable, as it may occur singly or in groups, hang out on reefs or silty flats and inhabit depths of anywhere from a few feet to a few hundred feet. Just as you might imagine, it is a very yellow goatfish (sometimes with a greenish sheen). Most specimens reach lengths of 14 inches, though much larger individuals have been reported. The yellow goat appreciates slightly cooler waters (~75F) and very frequent feedings of chunky or whole frozen items such as mussel, prawn and clam.

The bicolor goatfish (Parupeneus barberinoides), also known as the dash-and-dot goatfish, is distributed across the Western Pacific Ocean from the Philippines to western Samoa and from Micronesia to southern Japan. It prefers calm waters and sandy bottoms (often with some rubble). As its name suggests, it mainly has two colors: Reddish black in the front and creamy white towards its tail. Broad white stripes run above and below the eye. A black eye spot is situated just below the second dorsal fin. It reaches a length of 10-12 inches. Like the above, it appreciates slightly cooler waters and frequent feedings of chunky or whole meaty foods.