You are here: Home / Invertebrates / Snails / The Cerith Snail: A “Must-Have” Cleaner

Most aquarists are already aware that snails eat algae. To be most correct, the majority of snail species are algivores. To be sure, some have extremely specialized diets that do not include algae; other snails are technically omnivores, eating all sorts of things including algae. Then, for marine aquarists in particular, there is the issue of algae specialization; certain species of snail eat only certain types of algae. After you start running a tank and have to go snail shopping to add to your clean-up crew (CUC) for one thing or another, it might feel as though you need a freaking degree in malacology just to be sure that you’re actually getting the “right kind.” This certainly makes any truly omnivorous, unfinicky and voracious snail genera such as the cerith snail (Cerithium spp.) extremely attractive in the marine aquarium hobby. Its willingness to consume almost any sort of algae or organic waste, as well as its general hardiness, would indeed make it an excellent candidate for the first line of defense in any CUC.

One hugely nice thing about cerith snails is that because they exploit multiple types of food sources, they cannot starve to death after they have depleted one source. If, over time, it seems that the ceriths cannot alone tackle one type of cleaning, then you can simply add a few specimens of a more specialized species to finish the job. For example, if there is a persistent film of algae over the higher parts of the tank panel, you can supplement your CUC (in a targeted manner) with the addition of a few trochus snails. In this respect, ceriths are a good “starter snail.” You can start with these little guys and then fine-tune your CUC as necessary down the road!

Another nice thing about these snails is their small size. Sure, their smallness (as well as their hardiness) make it easy to ship relatively large numbers of them safely; this helps to keep their price down, which all aquarists certainly appreciate. But their tiny adult bodies and shells have additional benefits as cleaners. For one, it means that they won’t bulldoze your rocks, knocking over little frags and other small items. Even more importantly, it means that they can clean the tightest little holes and crannies (okay, maybe not the tiniest, but that’s what your pods are for!). Finally, this also means that when they die they leave behind a comparatively smaller mess than larger snails such as Turbo spp.

So, what is it about these snails that makes them so well-adapted to life in captivity? The whole family (Cerithiidae) has been quite successful since at least the Triassic period, inhabiting shallow sea floors. These are rarely stable environments. Ceriths almost always occur on soft bottoms (sandy or muddy flats), including sandy/muddy rubble zones, macroalgal beds, mangrove forests and seagrass meadows, just below the lowest low-tide. They are found in both tropical and temperate waters.

The cerith shell rarely exceeds an inch in length. It is long with a sharp tip (i.e. spire). The shell is whorled in a radial manner. The whorls are highly textured with tiny bumps and ridges. The animal is protected by a thin, brown, round covering (operculum) that effectively seals the shell’s opening (aperture). The slender shape of the shell makes it easier for the animal to burrow through soft substrates.

While they are surprisingly tough (especially compared to many other aquarium snails), ceriths should be acclimated to a new tank (like most mollusks) in a slow, gentle and unhurried manner. After that, there isn’t much to worry about!

As they are strongly nocturnal in habit, you might not see much activity by your ceriths while the lights are on. However, as soon as darkness falls, these little creatures break out in dramatic fashion (dramatic for snails, anyway). At night, they emerge from the sand and rocky caves into the open to feast on anything from nuisance algae to detritus and uneaten fish food. A common observation is that for such a small animal, the cerith snail has a ridiculously huge appetite. 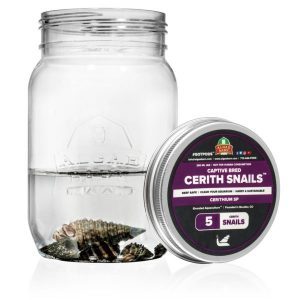 The cerith is special as a CUC animal for a couple of reasons. First, as it plows through the sand bed in search of settled particulate organic waste to eat, it stirs up the upper layer of the substrate, keeping it looking sparkly clean. Second, because it has the rare dual characteristics of an herbivore and a burrower, it is one of very few CUC creatures that will eat algae growing on the glass below the sand line.

Best of all, even though it has such a highly varied diet, the cerith snail is 100% reef-safe. It’s pretty hard to imagine how Nature could have created a better CUC snail for the reef aquarium. Hardy, harmless and extremely effective against nearly all forms of tank fouling, this should be a primary component of your CUC from the very beginning!