You are here: Home / Clean Up Crew / Utilizing the Trochus Snail (Trochus spp.)

Algae, of course, is not an inherently bad thing; without it, the natural world could not exist as we know it. However, there are many types of algae that readily grow in plague proportions under certain environmental conditions. Imbalances of nutrient levels (whether in nature or in the home aquarium) can quickly result in blooms of nuisance algae types. In addition to being extremely unsightly, these algal growths can cause additional water chemistry imbalances as well as smother out and kill more desirable plant and animal species including corals.

While “bad” algae can be controlled to a great extent by the presence of algae-eating benthic copepods such as Tig Pods and Tisbe Pods, aggressive growth is perhaps best curbed by a thoughtfully assorted clean-up crew that includes algae-eating snails. For persistent problems with green film algae, cyanobacteria and diatoms, there is hardly a better choice of snail than certain species of the genus Trochus.

One of the most used members of the group is the beautiful Trochus niloticus. These mid-sized gastropod molluscs, sometimes referred to by the common names trochus snails, top shell snails or turban snails, are distributed across the Indo-Pacific region from the Indian Ocean to Northern Australia. It seems that the natural range of this species has been extended by dispersal from ship ballast water discharges. While juveniles are typically found in shallow intertidal zones, older individuals tend to migrate out to slightly deeper waters on the reef slope. 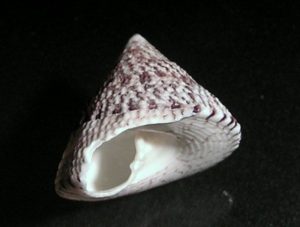 Trochus snails have an attractive shell that has been for long targeted by jewelry and curio peddlers. They are likewise prized by marine aquarists for their ornamental qualities. The outer part of the shell is graced with long purplish or reddish bands. Its shape is that of a cone with a sharply pointed spire and flattened bottom, usually with eight to ten whorls. The shape and durability of the shell helps to protect the animal from its predators. Trochus snails, unlike many other aquarium snail types, are able to right themselves if they fall, which also minimizes the risk of attacks by other animals (this good trait also reduces the amount of time the keeper must take to turn over fallen snails). Its foot is black with a white or off-white underside. A smallish, thin operculum covers the opening when the snail is hiding within its shell.

Healthy trochus snails have been known to reproduce in captivity. However, due to its pelagic larval stage, few if any young individuals of this species reach the juvenile stage in typical aquarium systems. This, perhaps, is why so many of these popular snails have been collected in the wild for the aquarium trade. Aquacultured specimens, reared under special conditions, are now available to hobbyists. These are not only more sustainably produced, but have a much better record of survivability in captivity.

Reasons for the marine aquarist to consider including troch snails in their systems are numerous and compelling. One oft-cited benefit of these ravenous algae-eaters is their taste for common-but-undesirable aquarium nuisance algae. In some cases, they will also feed on leftover fish foods. Most importantly, they are particularly adept at grazing on algae that appear in the earlier stages of a system’s cycling and maturation period, namely films produced by diatoms and/or green algae that may blanket the rockwork and tank panels. They additionally will (unlike many other snails) consume cyanobacterial sheets. They tend to stay above the sand line when grazing on the aquarium glass; for this reason, they may be very effectively complimented by the presence of cerith snails, which tend to eat film algae on the glass up to the sand line. One to five individual trochus snails are recommended per gallon of system volume, depending upon factors such as degree of algal fouling and desired speed of clean-up. Once these hungry snails have completely decimated the algal films, their diet should be occasionally supplemented with an algae wafer or two dropped in during evening hours.

Another great thing about trochus snails—especially those that have been captive-bred—is that they are relatively hardy and long-lived. Not even reaching maturity until they are a couple years of age, some specimens of Trochus niloticus are reported to have lived for more than 15 years. Because it is a truly tropical animal, it is likely to live out its full lifespan in a reef tank; subtropical (that is, cooler water) species are usually not so lucky. 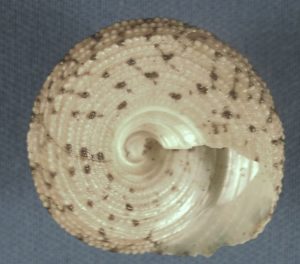 Because of their peacefulness and ease of care, trochus snails are successfully kept and used by aquarists of all levels of experience. Their low cost and high reliability makes them an incredibly good candidate for any clean-up crew. Though they may (like most mid- to large-sized snails) knock down small, loosely secured objects such as new coral frags, they are regarded as far less destructive in this manner than similar creatures such as turbo snails. Overall, their many good attributes greatly outweigh any minor problems that they might cause.

Trochus snails are indeed an excellent option for remedying most algae-infested tanks. They are undoubtedly among the best natural weapons for controlling or completely eliminating the most frustrating types of film algal fouling. Their attractive shells even add a splash of color to the aquarium. They are truly tropical and totally reef-safe. And, it definitely does not hurt that they live for a fairly long period of time; as such, they not only save the aquarist money, but also much time digging out and cleaning up after dead individuals. Captive-bred stock, which is even hardier and more adaptable to aquarium life than that which has been harvested from wild areas, is yet more desirable. When an appropriate number of trochus snails are present, it can be downright surprising how rapidly those ugly patches over the rock and glass will disappear. When considering their cost versus the impact they can have on an aquarium’s health and appearance, they really are among the best investments an aquarist can place in their carefully constructed systems.