What’s not to like about sea anemones? They’re basically big, squishy, solitary polyps with no skeleton. Very often, they are graced with beautiful bright colors. Their long polyps passively drift in the currents, so pretty and graceful that you might forget the powerful sting they can deliver. Even in a tank loaded with flashy corals, a sea anemone easily draws the eyes and makes itself the center of attention.

With all this appeal, it’s no wonder that so many aquarists want one of their own. Most prospective sea anemone owners are interested in those few species that host clownfishes. Some seek out a condy anemone (Condylactis spp.) due to its hardiness, high availability and relatively low price. But outside of that short list are many, many underappreciated species. So we’re going to give them a little love!

Below are four sea anemone species that we think are super cool but aren’t seen nearly as often as they should.

Hardy and distinctive, here is one really rewarding sea anemone. With lumpy nodules up and down each tentacle, it looks quite a bit like many soft coral species. Occasionally, specimens with beautiful pinkish or purplish coloration appear in the trade. Of course, an anemone with so many pros must have some cons, right? The one drawback for this species is its very powerful sting. It can and will eat small fish, and so can only be kept with larger fish. One could actually make this con another pro; some FOWLR tank keepers might be able to house it with more rambunctious fishes such as large angelfish, butterflyfish, etc. that tend to nip at less aggressive anemones.

The Hell’s fire anemone naturally inhabits calmer areas of the reef or rubbly parts of lagoons.

Definitely wear your gloves when handling this species! 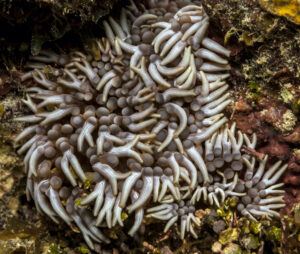 This is a very strange species that perhaps looks more like an LPS coral than a sea anemone. Its most distinguishing characteristic is its tentacles–specifically, that it has two types of tentacles. The branched primary tentacles (referred to as pseudotentacles) extend mostly during the day and are used primarily to capture light. The secondary tentacles extend mostly at night and are used primarily to catch prey. The light colored stripes along its branched tentacles make it even instantly recognizable.

The antler anemone occurs across the Caribbean in a variety of habitats including reefs and rocks in seagrass meadows. In some cases, it hosts commensal shrimp (Thor, Periclimenes, etc.)! Prefers areas of stronger flow.

Direct contact should be avoided with this species as its sting is fairly strong.

Here’s an easy to keep sea anemone! Years ago, it was actually somewhat common in the trade. For some reason it is not imported in the numbers it once was. Too bad, because it is quite pretty. Not that it is at all colorful; it mostly bears a ghostly pale translucence. But it nevertheless is quite attractive owing to its unique curly tentacles.

Because of its affinity for softer substrates and “vegetation” such as seaweed and seagrasses, it is a great candidate for a planted refugium. This one too is a frequent host of commensal shrimps. 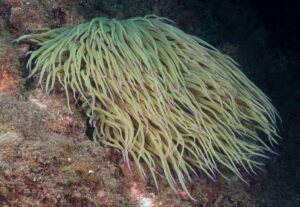 One thing people love about sea anemones is their long, flowy tentacles; few species have tentacles as long and as flowy as the snakelocks! Oh, and let’s not forget the color. This species is mainly bright turquoise green with a bluish sheen. The tips of the tentacles are often tipped with magenta. Overall, it looks like a condy on steroids.

The snakelocks only occasionally trickles into the trade, as it naturally originates from an unlikely region: Western Europe (mainly the Mediterranean). Being more subtropical or temperate, it is a favorite of coldwater marine aquarists. However, it can adapt to tropical tanks so long as the water doesn’t get into the upper 70s F. Aside from cooler temps, this beauty requires intense lighting.

It’s hard to not like a waratah… Especially if you like red reef critters. These are probably the reddist anemone you’ll ever find. As in, completely blood red from the oral disc to the tips of the tentacles. On the plus, it is nonphotosynthetic and so doesn’t need bright lights. On the other hand, because it originates mainly from the cooler waters of Eastern Australia, it can only be housed in reef tanks that stay at the lower end of the “reef” temp range. This one is harder to find but does enter the trade from time to time. Captive-bred specimens have even been available in recent years!

This species is rather hardy but does appreciate some attention, as it has a ravenous appetite and should be fed regularly.

We can dream, right? Because this one is kinda maybe starting to find its way into the States?

This species is absolutely stunning. Its dark olive base color is the perfect background to make the pink-red flush and yellow striping on its tentacles pop like mad. Yellow speckles cover the column.

Collected from rocky reefs along the Japanese coast, these too like cooler temps (why do all the most awesome sea anemones have to come from temperate regions?). This one should be kept at temperatures below 78°F.