No matter who you are, how skilled you are as an aquarist, how diligent you are at cleaning your tank, how little you feed or how advanced your filter system is, one thing is all but certain: unwanted forms of algae will appear in your reef tank from time to time. Nuisance algae can be controlled (if not eradicated) by a smart assortment of clean-up crew animals, such as pincushion urchins. Indeed, one of the primary tasks of most clean-up crews is to consume benthic microalgae. Such an assemblage might include anything from copepods to snails.

Still, even those aquarists who have deployed a powerful algae-eating force of clean-up crew animals might find that certain types of “bad” algae can get out of control. These types can reduce the tank’s overall aesthetic quality and, eventually, dangerously encroach upon sedentary invertebrates such as corals.

Chief among these unsightly, stubborn and potentially deleterious algal forms are the hair and turf algae. These can develop into dense carpets that are often resistant to grazing by smaller herbivores. While some fishes might nibble on them, their interest in these marginally palatable algae is limited. Really, the only sure-shot for tight control of the hairy/turfy algae is to add one or more sea urchins.

Nearly all of the 700+ species of sea urchins (Phylum Echinodermata) are herbivorous. This is hardly surprising, given the extent to which these animals are adapted for grazing. Like, really adapted; they don’t just eat all of their greens, they scrape their “plate” clean. Their typically very thorough job is accomplished with the help of a distinctive feeding organ known as the Aristotle’s lantern.

The lantern is comprised of a set of five toothy jaws that surround both the mouth cavity and the pharynx. The pharynx opens into the esophagus at the top of the lantern. A soft, tongue-like structure is situated in the middle of the jaws. The jaw mechanism is made up of five sturdy plates (pyramids). A tooth juts from each pyramid towards the center of the mouth cavity. An urchin can grasp, pull, tear and rasp plant materials using specialized muscles to manipulate its jaws.

And, sea urchins have a legendary appetite. In cooler waters, they are ecologically influential in their ability to regulate the size/composition of kelp forests. On coral reefs, they are equally important in their role of protecting stony corals from overgrowth by fast-growing algae. You read that right: natural algae-control on coral reefs is largely carried out by sea urchins. But how about in captivity?

Many urchin species are great for reef tanks. Not only are most sea urchins totally reef-safe, but they also are attractive and interesting to observe. Best of all, they simply cannot resist turf and hair algae. Many hobbyists have marveled at how much algae a single specimen consumed over the course of its first night in a new (and previously overgrown) aquarium system.

There are a few sea urchin species that regularly show up in the marine aquarium trade. The best of these have a certain combination of desirable characteristics:

At present, few sea urchins in the trade meet all of these criteria. One such species is the beautiful pincushion urchin (Lytechinus variegatus).

The pincushion urchin comes from the Western Atlantic Ocean, where it occupies seagrass meadows and other soft-bottom habitats. Pincushion urchins are a very wise addition to one’s aquarium clean-up crew. There a numerous reasons for this. But we’ll start with the big one: they very rapidly eliminate the toughest forms of algae! They additionally scavenge on organic waste such as fish feces and uneaten fish food. They can be obtained at a small size (purchase size of 0.5-2.0 inches and maximum size of 8 inches). They are completely reef-safe. Moreover, they are less apt to knock over stuff (e.g. small coral frags) than are other urchin species. Captive bred individuals are now available; these are not only sustainably produced, but are even tougher than their wild counterparts. Indeed, these hardy individuals represent some of the first captive-raised specimens to become available to hobbyists! And, because their spines are not needle-sharp, they are a bit safer to handle (even so, caution is always advised when handling any sea urchin).

A gardener wouldn’t use a weedwacker to chop down tree, nor would they use a chainsaw to clip weeds. There is no perfect clean-up crew animal. Though they literally scrub rock surfaces clean, sea urchins (including the pincushion urchin) cannot get into the tiny pores in rock. This job is mainly for the smaller herbivores such as pods! Urchins act more as the bulldozers, doing the big job, while the smaller grazers can follow up and finish off the crumbs. Thus, depending upon the types/amount of bad algae present, an aquarist might use one pincushion urchin (along with a handful of snails and a bag or two of benthic copepods) per 30 gallons or so of tank volume. 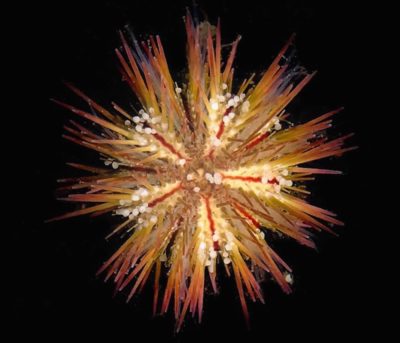 One Urchin for All

Pincushion urchins are not finicky about feeding, housing or water parameters. They will be just fine at a temperature of 72-78°F and a pH value of 8.1-8.4. Specific gravity can be maintained between 1.023 and 1.025. They usually do not require supplemental feeding when housed in a saltwater aquarium where some nuisance algae and leftover fish food present. As scavengers, these urchins will constantly scour the live rock in your tank searching for algae or uneaten fish food or fish waste. However, if they do such a great job at cleaning that they run out of algae/wastes to eat, the keeper can offer a snack of seaweed such as Ulva from the refugium.

Sea urchins are one of the most effective (and indeed most natural) choices of algae-eater for the marine aquarium. Though there is a fairly wide range of urchin species to select from, pincushion urchins (especially aquacultured specimens) are among the best. Pretty, fascinating and easily maintained in captivity, no reef tank should be without one!

How PNS YelloSno Works in the Ultimate Galaxy Pack

As reef keepers, we are all too aware of how intricate the ecosystems of coral reefs are. And at AlgaeBarn, we are mindful that every living organism on