Particularly since the advent of clam farming, tridacnid clams (Family Tridacninae) have been steadily gaining both in popularity and presence within the aquarium hobby. They were once only available as wild-caught, were exceptionally delicate and were thus appropriate only for the most experienced of aquarists; nowadays, farm-raised specimens are in regular production, have proven markedly hardier and are thus more broadly appropriate for all but beginning hobbyists.

There are 12-13 extant species of tridacnid clams in two genera, namely Hippopus and Tridacna. For sure, Hippopus clams are far less known and much more rare in the hobby than their Tridacna kin. Indeed, to this day, it is unusual to see Hippopus in an aquarium shop. This article sheds a bit more light on these hard-to-find beauties. 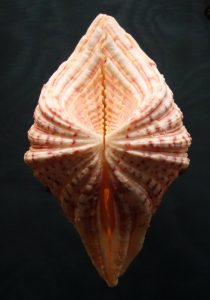 Hippopus clams may be encountered in the wild from the eastern Indian Ocean to western Australia and southern Japan (though H. porcellanus is mainly concentrated in the southwest Pacific). While they inhabit a variety of shallow (i.e. brightly lit) environments such as algal beds and seagrass meadows, they prefer sandy or gravelly reef flats.

In terms of maximum adult size, Hippopus species are somewhere in the middle of Tridacna. One notable distinction between Hippopus and Tridacna is that the former (especially in the adult stage) attaches to the substrate much less securely. While hippopus clams do lay down a few byssal threads (including mature specimens), they rely mainly on the weight of their big bodies to keep them in place.

Compared to Tridacna, the Hippopus mantle only reaches the upper edge of the shell. That is, it does not extend beyond the edge of the shell as in Tridacna. Also, in contrast to its cousins, the inhalant siphon (the opening where water is drawn into the body chamber) lacks tentacles around its margin (though it may have a rough edge). The exhalant siphon (the opening where water exits the body) has a comparatively lower profile than Tridacna and is more or less a bump with a small hole in it.

Hippopus Clams In the aquarium

For years, farmers focused on the flashy species from the genus Tridacna. And without a doubt, this effort was worthwhile, as these varieties (such as the blue or purple color morphs of T. maxima) are truly stunning. But, thankfully, farms have looked beyond the gaudy, eye-catching species and worked on some of the lesser seen tridacnid species such as those from the genus Hippopus. Though not as fancy as some of their glamorous relatives at first glance, hippopus clams are quite attractive and exotic looking in a way that grows on you more and more over time. 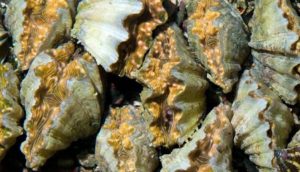 Their mantle is often golden hued with yellow squiggly lines, superficially resembling that of T. derasa. That being said, there is considerable variation of coloration in both species. Some bear a deep blue or green base color. Because the mantle is restricted to the span between the edge of the shell valves, the animal looks a little more “clammy” than its Tridacna counterparts. In fact, it looks somewhat split apart when gaping open.

While some aquarists like the more flowy, oversized mantle of Tridacna, there’s something to be said of Hippopus in that it exposes and show off more of its handsome shell. Because its shell valves are highly symmetrical, the shell can (unlike some Tridacna species) close very tightly.

Another thing aquarists (especially reefkeepers with crowded tanks) might like about hippopus clams is that they actually prefer to rest on the tank floor over the substrate. Placing them is as simple as letting them settle onto an unshaded spot on the sand bed. It is, of course, always a good idea to ensure that frags and other poorly secured objects on the hardscape cannot fall onto them.

While Hippopus likes fairly bright light, it is not quite as picky in this regard as are T. maxima or T. crocea, for example. However, because of its ideal placement on the tank bottom, powerful aquarium lighting is strongly recommended (especially when kept in taller tanks).

Though the animal will obtain most of its food energy from its zooxanthellae, it benefits from frequent additions of quality live phytoplankton such as OceanMagik.

Hippopus clams offer something a little different than the “typical” tridacnid clam. They are most stark and robust in appearance. While their mantle colors are comparatively subdued, the rich, warm golden browns and beiges actually pop in an aquascape loaded with fluorescent purple and blue corals. The highly ornamental shell, mostly uncovered by the clam’s modest mantle, adds an interesting visual element to the tank bottom over a crisp white sand bed.

Best of all, now that these rarer gems are available as captive-bred, aquarists can show them off with relative ease of care!

As you may or may not know, World Oceans Month and World Reef Day are in June! And here at AlgaeBarn, we wanted to take this opportunity to raise awareness