You are here: Home / Invertebrates / Captive Bred Inverts / A Look at the Harlequin Shrimp

It is probably safe to say that the majority of aquarists (especially marine aquarists) are initially awestruck by the visual impact that a well-maintained aquarium can create. While they are certainly attracted to the bright colors that so many reef animals bear, they may also find themselves fascinated by the unusual behaviors that these creatures exhibit. Especially as they progress as hobbyists, they tend to gravitate more and more toward stranger and increasingly specialized organisms. This oftentimes culminates in interests that start with a focus on fish and mature into a focus on invertebrates.

Of course, the blanket term “invertebrate” includes a vast diversity of organisms, each with its own set of general environmental and dietary needs. Nevertheless, because they live with and interact with each other in their natural environment, they can in many cases be housed together in captivity with little concern or special attention. In some other cases, they require a little bit more care with respect to diet and tankmate compatibility. For many advanced aquarists (who tend to relish new challenges and unusual livestock), the specialized husbandry that these species demand is more of an incentive than a downside. When a species has these special characteristics and is exceptionally beautiful, these venturesome hobbyists cannot bear to ignore it. One such creature, for sure, is the harlequin shrimp (Hymenocera elegans and H. picta).

Harlequin shrimp occur widely across the Indo-Pacific Ocean, though they are never very abundant in any one area. They are mainly found on or around coral reefs in deeper parts of the subtidal zone. A smaller animal, it generally grows no larger than two inches in length. Females (which carry and brood the eggs) are somewhat larger than males. Male/female pairs are very commonly encountered in the wild. These close couples rarely venture very far apart, and individuals will even confront rivals that get near their mate. The bonds, apparently, are long-lasting. 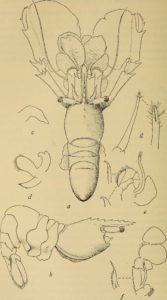 There are only two species in the genus. H. picta and H. elegans are quite similar; they are most easily distinguished visually. H. elegans, which is from the Red Sea and Indian Ocean, is more brownish in color whereas H. picta, which is from the Central Pacific, is more reddish in color. In both species, the bright patterns run all of the way over the animal’s big, flattened claws. While impressive to look at, the harlequin shrimp’s enlarged claws are specialized for specific feeding behaviors, as they are obligate predators of certain types of starfishes.

By most accounts, wild harlequin shrimp prey mainly on Linckia spp. starfishes (despite the starfish’s ability to exude defensive, noxious substances). The shrimp finds its prey at least partly by sense of smell, using highly responsive sensory antennules on its head. After smelling and then locating a starfish, the shrimp pushes one of the starfish’s arms from the bottom using its strong claws. It then crawls beneath its prey and eventually flips it over. Once its prey has been completely subdued, the shrimp uses its special feeding limbs to break through the starfish’s tough body structures and get at its tube feet as well as other soft tissues. It may take several days before the shrimp breaks through to the targeted viscera.

In captive conditions, less robust starfishes (such as Linckia spp.) might become malnourished and thus struggle to regenerate severed arms. For this reason (and perhaps because Linckia spp. are bit more expensive to purchase), aquarists frequently utilize an alternative feeder starfish type. The common (if not pest) starfish Asterina spp. has been used as a suitable Linckia substitute. In other instances, instead of feeding a whole starfish at once, the keeper may remove one of the starfish’s limbs and use it as feed. The rest of the starfish is maintained elsewhere (perhaps the refugium) as to safeguard it from its predators. Protected in this way and fed a generous diet of meaty foods, the starfish will soon recover and regrow its lost parts. Keeping a group of feeder starfish on hand will further help to ease recovery by extending time between cuts for each individual. The large, sturdy starfishes known as the chocolate chip stars are ideal for 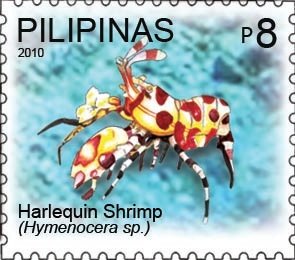 this feeding technique. Harlequin shrimp reportedly do not feed on brittle stars.

In the rare event that a keeper is unable to find any kind of suitable starfish for feeding, sea urchins (from which the shrimp will eat the tube feet) may be offered as substitute. It should be noted, however, that this particular substitute is not always accepted. Though harlequin shrimp appear to be capable of surviving periods as long as a few weeks between feedings, they ideally should be fed on a weekly basis.

Harlequin shrimp are mostly active at night. Being rather conspicuous in appearance and having few natural defenses, it can be rather nervous in captivity, particularly in the presence of larger, highly active fishes. It certainly should not be kept with known shrimp-eaters such as hawkfish and many wrasses. If overly wary, even a hungry harlequin shrimp may choose to hide rather than take a feeding opportunity. Also, because of the species’ high level of territoriality and its protectiveness towards mates, multiple pairs should be considered only for very large aquarium systems (and, even then, they should be monitored closely for signs of aggressive behavior). Indeed, a dedicated species tank (or one shared with totally placid tankmates such as seahorses) is best. Because harlequin shrimp are fairly delicate little creatures, it is a good idea to cover inlets to any water pumps. Otherwise, their holding tank itself will require no special modifications.

For so many aquarists, this is a species that grows into a role of a true pet. So long as its special diet is properly addressed, the harlequin shrimp does quite well in captivity. Where it is afforded ample space and good water quality, it will provide its keeper with years of enjoyment. And, it might be one of the most strange and attractive and downright rewarding reef animals that you will ever keep.