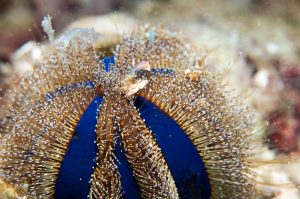 My first sight of a real, live sea urchin was in an aquarium (a friend’s) rather than in the sea. This was in my youth (i.e. quite a long time ago) in the upper Midwest–a time and place when/where marine aquarium livestock was quite difficult to get your hands on. Back then, and especially there, all aquarium marinelife was rare and indeed precious. Rather than being some mere, lowly, underappreciated clean-up creature, this particular specimen was kept proudly as a pet of sorts, with a 55 gallon tank all to itself.

To my recollection there was no aquascaping in the tank to speak of but for a thick layer of crushed coral on the bottom (probably over an undergravel filter). Most striking in my reminiscences is the extra-thick film of algae that grew on the tank walls; the aquarium was situated across from a sunny window, and the algae most likely was allowed to proliferate for the benefit of the urchin. The animal always sat at the end of a trail it had made as it grazed algae from the glass. I was fascinated by its seemingly deliberate movement and feeding behavior–of its spines, its tube feet and its really weird mouth.

In working at numerous retail and wholesale aquarium livestock shops in later years, I sold a veritable heap of sea urchins. But it was always this one individual specimen that stuck in my memory and left a distinct impression. Yeah, these guys are definitely keystone algivores in both reef tanks and in the wild–they do serve a “purpose.” But they’re also pretty cool!

This article was penned simply to sing the song of the urchin–to encourage aquarists to take a closer look at these fascinating animals and enjoy them for what they are.

Like it’s echinoderm cousins (starfish, sea cucumbers, feather stars and sand dollars), the sea urchin has no head, much less a brain. Its globular, unsegmented, radially symmetric body is covered in (often very sharp) spines. The body is enclosed in an endoskeletal shell-like armor (called a test).

The test reflects the pentamerous (five-part) body plan shared by relatives such as starfish. The test is made up of ten double rows of closely fitting plates (called dermal ossicles). Each plate is sutured to those next to it. The rounded ends of the spines articulate like ball-and-socket joints in tubercles on the plates; spines are moved by small muscles around the base.

Like other echinoderms, sea urchins move by way of many tube feet (though some movement is carried out by the spines). The feet are powered by its unique water vascular system. Each foot has suction cup-like disc at the end and can move independently of the others. Sometimes urchins use these feet to grab small rocks, pieces of coral skeleton, shells, etc. in order to hide and/or protect themselves. 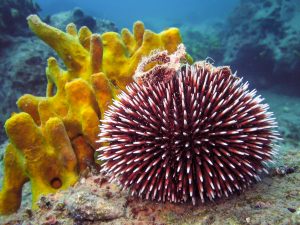 In addition to the tube feet, sea urchins have numerous stalked structures called pedicellariae. Instead of suction discs, these extensions are tipped with tiny (usually three-jawed) claws. The pedicellariae have different functions that range from self-cleaning/grooming to hunting small creatures. In some species, these bear poison glands that are capable of paralyzing tiny prey.

Sea urchins have a simple (but complete) digestive system. That is, they possess both a distinct mouth and an anus; the mouth and anus (which opens at an area called the periproct) are connected by a digestive tract. Because their “butt” is positioned at the aboral pole (the side opposite the substrate), the animal oddly “poops” out of the top of its body.

One cannot talk about this bizarre creature without mention of its highly unusual mouth. The sea urchin mouth is formed by five converging “teeth” to form a structure called the Aristotle’s lantern. Strong muscles make this device a very effective rasping/chewing mechanism. From its mouth, a ciliated siphon connects the esophagus to the intestine.

Sexes are separate; eggs or sperm are cast into the water column during spawning events for external fertilization. There is a single larval stage in urchins called Echinopluteus which, interestingly, is bilaterally symmetrical.

Upon a closer look

They don’t beg for food when you approach the tank. They don’t fight with each other. They really don’t have any dramatic, hyper-extroverted behaviors that grab your attention. Yet, sea urchins are nevertheless truly captivating animals. Their locomotion alone, which is conducted by remarkably simple nervous, muscular and water vascular systems, is something to behold.

Particularly well suited for aquarium display are the more colorful species such as the pincushion urchin (Lytechinus variegatus) and the blue and red tuxedo urchins (Mespilia globulus and Mespilia cf. globulus respectively). Each of these is available as captive-bred. This is a great thing, as cultured sea urchins have proven to be far hardier in captivity than wild stock!

Whatever species of sea urchin you introduce to your reef tank, you’re in for a real treat. Sure, they’re extremely effective clean-up animals. But these peculiar and sometimes beautiful echinoderms are truly awesome “ornamental” creatures as well, and for as long as you take an occasional closer look at them, they’ll never fail to amaze you!

Part one of this series took a brief look at the different levels of the Food Pyramid. So, why does it so often look like a pyramid in the first place–with

Read More about Trophic Structure in the Reef Aquarium Part 2