You are here: Home / Invertebrates / An Overview of the Atlantic Sea Nettle (Chrysaora quinquecirrha)

It is a bit of a fortune to jellyfish enthusiasts that one of the most attractive aquarium species, the Atlantic sea nettle, is also among the easiest to take care of. The availability of captive bred specimens, as well as high-quality live and prepared jellyfish foods, will almost surely lead to an increased presence of this beautiful animal in the marine aquarium hobby.

The Atlantic sea nettle (sometimes alternatively referred to as the East Coast sea nettle) has an extensive geographic range that spans the tropical and subtropical Atlantic, Indian and Western Pacific Oceans. The species is especially common along Western Atlantic coasts from New England to Brazil. Particularly in the late summer months, it can often be found in very high abundance in brackish, estuarine environments. 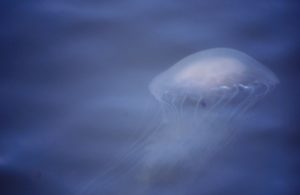 The Atlantic sea nettle is born either male or female. However, it exhibits little or no sexual dimorphism (that is, the bodies of males and females do not differ significantly in shape or size). During its life cycle it takes on two distinct body forms. The first is described as the polypoid stage. In this stage, the animal resembles a tiny sea anemone (usually only a few millimeters in length) and is attached to a hard substrate by a stalk. During this stage, it may reproduce asexually by budding. Budding (or polyp strobilation) generates ephyra. Ephyra can be described as smallish, immature jellies. In the Atlantic sea nettle, there are six separate life stages from the ephyra to the adult form.

The adult form, known as a medusa, is most recognizable as a jellyfish. The medusa body plan is basically made up of an umbrella cup, tentacles and an inner gastrodermis layer. The mouth, which is covered with many tiny holes (or mouthlet pores) is the only opening to and from the animal’s digestive system. Four long oral arms hang down from the center of the cup and ring the mouth. The oral arms are used mainly to carry food items to the mouth. The very long, slender tentacles, which line the outer edge of the umbrella cup, are used mainly for defense or for capturing prey. Its dome-shaped body reaches an average width of around 25 centimeters (10 inches). Seven to ten tentacles extend from each of eight lobes on the cup. Each tentacle is covered with specialized stinging cells (known as nematocysts). Including the tentacles, the animal reaches an average length of around 50 centimeters (20 inches).

As an adult, the Atlantic sea nettle is a bit smaller in size than its Eastern Pacific counterpart, the Pacific sea nettle (Chrysaora fuscescens). Its coloration is also a bit different than its cousin, being paler (usually a ghostly white, but sometimes with light pink or yellow hues). Some wild specimens may have small whitish dots or brownish stripes radiating over the edge of the opaque umbrella cup. Captive individuals tend to be very pale, and can look very impressive under the glow of some forms of decorative colored lighting.

A potent venom in the stinging cells effectively immobilizes prey. Atlantic sea nettles feed primarily on copepods and other small crustaceans, but are also capable of capturing small fish, fish eggs, ctenophores and even other jellyfishes. Due to its sting, it has relatively few natural predators; in the wild, it is preyed on only by a small handful of creatures such as ocean sunfishes, leatherback turtles and larger jellies. Its sting rarely poses a serious danger (e.g. allergic reactions) to humans. Stings most often result in a rash that lasts for about twenty minutes. In cases where the rash produces painful sensations, one might get some relief by misting (but not rubbing) the rash with vinegar.

Aside from its elegantly tapered body shape and delicate tentacles, aquarists prize the 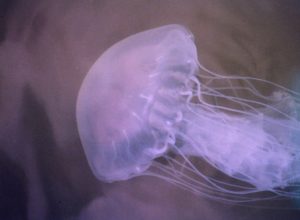 Atlantic sea nettle for its very active swimming behavior. Its high mobility owes to strong pulsations of the umbrella cup. Pulsation of the cup is controlled by a network of nerve cells. Not only does this activity propel the animal through the water column, but it also helps it conduct gas exchange through its tissues. Its swimming behavior is surprisingly nonrandom. While it generally prefers to swim against the prevailing water currents, its swimming pattern can change when moving towards higher prey densities. Hence, in the wild, Atlantic sea nettle populations can concentrate in certain areas. It is believed that during the summer breeding season, when in these large congregations, they are capable of exchanging chemical signals.

The species is not currently under consideration for conservation status. Even so, captive bred specimens (which have recently become available to aquarium hobbyists) are preferable as they have a much higher record of survivability than those that are harvested from the wild. Moreover, the sting from captive bred individuals is said to be comparatively less intense. The maximum lifespan of this creature is still unknown, though they seem to live for about one to two years in captivity.

Compared to other jellyfishes, the Atlantic sea nettle is considered to be easy to care for. If kept in an appropriately sized and maintained kreisel style aquarium, the Atlantic sea nettle can be easily maintained in captivity. Jumbled together in large numbers, nettles will sometime form tangled masses, only to somehow untangle themselves later. They do not appear to have any special lighting requirements. Good water quality, on the other hand, will do much to help ensure good health. They should be kept at a tepid 68-77°F (20-25°C). They may be fed copepods, brine shrimp and/or certain specialty prepared diets. Feedings should be small but frequent (two or more times daily). So long as the quality of their food is high and there is a small, but almost constant, supply of it in the aquarium water, they tend not to have any major health issues in the home aquarium. Overall, Atlantic sea nettles are surely among the most attractive, hardy and interesting jellies to keep for experts and novices alike.