You are here: Home / Corals / Keeping the Birdsnest Coral

As a group, SPS corals can be endlessly frustrating, even for veteran reef aquarium hobbyists. For beginner reefers in particular, it can be satisfying to witness some success with this group not just through mere survival, but also through clearly observable growth. For those who are eager to see their little “sticks” get bigger, or even for those with huge tanks who are impatient for their corals to grow into huge colonies, the birdsnest coral (Seriatopora spp.) is a perfect choice.

Indeed, birdsnest corals are all-time faves with reefers not just for their prolificity but also for their very bright coloration. Making them even more desirable for first-time SPS keepers, birdsnests are a bit less finicky about lighting than are their small-polyped brethren–or, at least, they don’t prefer the extremely intense illumination of Acropora or Porites. They are more similar in appearance and care to the related Stylophora.

Here we discuss the biology of these lovely stony corals as well as their care in aquaria. 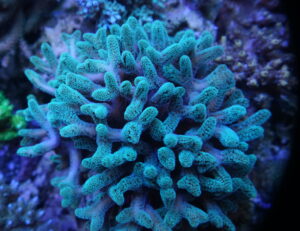 The genus Seriatopora includes colonial, small polyped stony corals in the family Pocilloporidae. These corals are distributed widely across shallow tropical reefs the Indo-Pacific region including the Red Sea. They are frequently referred to as birdsnest corals, brush corals, needle corals or finger corals. There are about seven species in the genus, and several of these have taken on the common name of “birdsnest.” However, it is the lacey, thinly structured S. hystrix (which is especially nest-like) that probably was first to take on that name. The branch tips of S. hystrix are obviously much pointier and tangled than those of S. guttatus (such as the famous lime green Bird of Paradise strain).

Growth forms are–even within a single species–highly variable in these corals depending on light intensity and water movement. For example, they are notably stubbier when exposed to strong wave action and finer in calm, protected habits such as lagoons. In some species the branches may fuse together. The species with overall more blunted tips such as S. caliendrum occur over shallow upper reef slopes and prefer higher light intensity and water movement.

Polyps only fully extend after dark. They are more or less arranged into discernible rows along the length of the branch. Polyp color may be be pink, green or brown.

Birdsnests in the reef tank

Now, remember that part we said about birdsnest coral being great for first-time SPS keepers? Because they’re kind of adaptable and grow pretty fast? That’s all true, but with a caveat; many experts warn that despite all that, these corals do prefer to be in a stable, well-established system. So more specifically, they appear to be great for an aquarist who has managed a successful fish- or LPS-dominated system for some time and wishes to ease into the SPS realm using that same tank (perhaps even before needing to upgrade lighting or increase water flow). 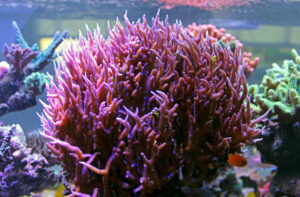 Receiving and mounting a new birdsnest coral can be a frustrating. First, they are quite fragile and almost invariably suffer some (or maybe a lot of) breakage during transport. The larger the colony, the more extensive this breakage will be. It isn’t the worst thing in the world, though; most of the fragments can be attached to plugs and gifted off, or glued to other spots in your hardscape. Birdsnest corals tend to grow only outward, so don’t worry if they fail to spread over the glue and onto the rock below. In fact, as the colony expands, more and more dead skeleton will appear beneath (sometimes to become covered in sponge, small tube worms, etc.).

If you listen to all the conflicting information regarding their lighting requirements, you very well could go mad. On the other hand, you’ll likely enjoy success simply by closely replicating the conditions described by the grower (when available). In general, these corals prefer “moderate” lighting. It is highly advised to gradually light acclimate these species, particularly when moving them from a dimmer to a brighter environment.

Information about water flow for this group can be even more contradictory. Probably, the best flow for them is the one that you set up and then don’t mess with, as the growth form of each colony is highly adapted to the flow patterns that it is accustomed to. Really, specific flow strength seems to be less important than creating a truly random flow that hits the colony from as many directions as possible. As the colony grows in size, it becomes increasingly challenging to provide adequate water flow within the deeper, denser, inner parts.

Who can deny that it is gratifying to see such a physically delicate coral grow so rapidly to form an intricate, colorful stony skeletal structure within a few months? Given the huge rewards for keeping them, it’s surprising how simple they are to maintain (at least for an SPS genus). And professionally farmed varieties such as Biota’s Bird’s Net Coral are especially easily kept. Even if acros get all the press, it very well may be the birdsnest that gets the lion’s share of your love at home and keeps you staring intently through the glass for hours on end!