Thanks to huge improvements in technology as well as better livestock supply chains (including an ever-increasing availability of captive-raised specimens), more reefkeepers are enjoying success than ever before. That being said, no veteran hobbyist will ever be able to honestly say that maintaining a reef tank is completely without challenges–nor disappointment. Even the most experienced aquarists experience failure from time to time (if not regularly). And of course, there are even more holes for new aquarists to fall into. With that in mind, it is highly recommendable that “newbies” test themselves and their tanks with hardier corals before tackling more delicate corals.

Because certain water parameters (most notably calcium) are more critical for success with stony corals, the keeper has slightly less to worry about when starting with soft corals. While there certainly are exceptions, soft corals are indeed generally more forgiving of suboptimal water quality, water flow, lighting, etc. And, to the benefit of the inexperienced reefer, they are (due to their soft, pliable bodies) less susceptible to damage incurred during handling (for example, mounting).

Of course, even the most patient and careful individuals in the world will be in a hurry to acquire some big, beautiful corals for a newly set up system. Thankfully, one of the hardiest soft corals out there, Sinularia spp., is quite attractive and is a great choice of “starter” coral.

This article provides an overview of sinularia corals and briefly outlines a path to successfully keeping them in new systems. 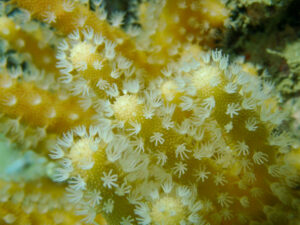 The genus Sinularia belongs to the fairly large octocoral family Alcyoniidae. While not particularly abundant in the tropical Atlantic region, this family dominates octocoral groups across the Indo-West Pacific region. These corals form sometimes massive fleshy growths that can span several meters that are several centuries old.

Generally, colonies consist of (1) a basal section, which serves as a sort of trunk and (2) an upper polyp-covered section. The upper portions are lobed or branching. The inner parts of the colony may be either jelly-like or more rigid, depending upon sclerite content (which depends upon species). Sclerites are so thick in some Sinularia species that they fuse to form a sort of stone material called spiculite (thereby earning them designation as “reefbuilding,” which is rare among soft corals).

Colony shape varies more within Sinularia than in any other soft coral genus. Colonies might occur as stubby knobs or as branches or even as flattened slabs. The contractile polyps are small with short stalks. Specimens are sometimes misidentified as Cladiella, Lemnalia or even Lobophytum. Colors are typically subdued, though some bright green fluorescent varieties are known.

Owing to its flexible yet tough and leathery body, Sinularia tolerates a wide variety of water flow rates. Growth form may even vary with water flow, with stronger flow resulting in thicker, stubbier lobes and branches.

These corals are characteristically zooxanthellate and depend upon the health of their symbiotic algae for their own survival. However, they are highly adaptable to different light regimes and therefore may be found in most reef habitat types from clear, brightly lit shallows to murky depths (down to 120 feet or more). They are highly competitive in shaded areas such as steep walls. They even extend far beyond the tropics into cooler waters (and more broadly fluctuating seasonal photoperiods) that limit stony coral growth. 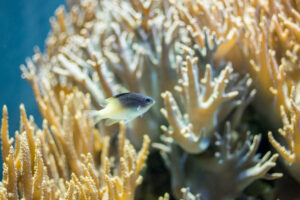 Known in the aquarium industry as “finger leathers,” sinularia corals are a common place to start for those who wish to dabble in reefery. Easily propagated in captivity, cultured specimens are frequently available. Captive-cultivated specimens are the hardiest examples of an already hardy coral. These pieces are often firmly attached to a sizable plug or rock fragment, making mounting to the aquascape even easier for the beginning hobbyist.

Since this adaptable species is less finicky about its real estate, it is best mounted in a spot that other corals won’t like (the sides of large rocks, lower parts of the tank, etc.). It should, however, be afforded plenty of space as it may grow at a stunning pace. Though it sometimes tolerates really wimpy water flow, your best bet will be to place it in an area of strong, chaotic flow where it will not suffer from hypoxia, sedimentation, etc. Similarly, while most sinularia coral varieties tolerate relatively low light levels, most fare best under moderate to brightly illuminated conditions. Highly branched varieties are best situated directly under lights to minimize self-shading. Indeed, with respect to both flow and lighting, it seems that for a lot of sinularia, okay is okay but better is better. Take for example the unusually beautiful Biota Yellow/Green Sinularia. This neon light-green strain is exceptionally hardy, yet exhibits it maximum growth and splendor under stronger flow and brighter light.

Whichever type you acquire, a sinularia coral is a great “test coral.” Not only are they inexpensive, but these canaries-in-the-coal-mine are so sturdy that if they don’t like your tank, you can be sure that not much else will survive there. When conditions are favorable, on the other hand, your sinularia will grow into a striking and handsome show piece in surprisingly little time!