No matter how obsessed reefkeepers get with their “sticks,” the visual appeal of soft corals is undeniable. Few aquarists could ever resist having at least one or two softies waving in the current, and we see this in most of the systems we encounter in forums, social media, in LFS show tanks, etc. With its highly branched structure and long, slender “arms,” Nephthea is a standard for beginners and veterans alike.

Many members of the family Nephthiidae (Stereonephthea, Lemnalia, Capnella, Litophyton, etc.) are regularly confused with one another. The following serves as a short overview to help new hobbyists distinguish the classic nephthiid coral genus Nephthea and provide it with the best possible captive care. 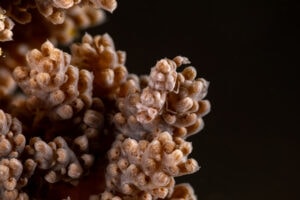 The family Nephthiidae is represented mainly by bushy or tree-like colonial corals. The branches (finger-like lobes) share a thick, common base. Typically, polyps are concentrated on the upper and out parts of the branches. These non-retractile polyps are almost never found on the main base. Colonies can inflate/deflate to change size dramatically. Despite their extra-soft and flexible look, members of this family have a prickly feel due to their numerous sclerites, which make the coral extremely tough.

Nephthea is readily identified by its highly clustered polyps at the end of terminal branches to form lumpy “catkins.” These clusters look this cauliflower when the colony is slightly deflated. It generally grows in an upright tree-like form. Even compared to other members of its family, it is quite soft-bodied. While not especially brightly colored, it nevertheless is attractive with its golden brown or purpley grey base color (often with a neon green sheen). It darkens under extremely intense illumination, presumably due to the presence of dense zooxanthellae. Interestingly, some of its close relatives (Dendronephthya, for example) do not ever harbor zooxanthellae.

While it is especially similar to Capnella, Nephthea has crowded branches and tinier polyps. They are more squat and have thicker branches than Litophyton. Unlike Stereonephthea, its sclerites do not stick out at the tips when the colony is deflated.

It is distributed very widely across the Indo-Pacific region and can be rather abundant in clear-water habitats; it is rarely found in turbid or wave-exposed habitats (e.g. back-reef slopes and reef crests with strong flow and exposure to deeper, clear oceanic water. It likes brisk, laminar tidal currents but dislikes waves action. It is often found on flat, horizontal reef floor structures. On the other hand, there are some reports of it growing on slopes (huge colonies, too), albeit in deeper waters.

Nephthea is frequently recommended for beginner reefers on account of its hardiness. In fact, it was among the first coral genera to be regularly propagated. And, as one might expect, these cultured specimens are even sturdier. All that being said, it hates shipping, handling and acclimation, and therefore can be a bit touchy when first introduced to a new system. But have no fear, once adjusted, this coral is about as trouble-free as it gets in reefkeeping. In very little time your little colony may grow into a huge mass, and you might even be fragging it like crazy. 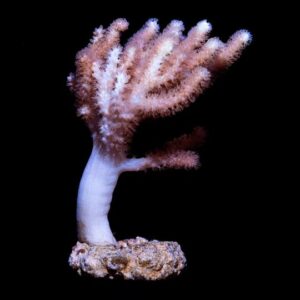 It is best placed on top of a large slab (as opposed to the side of a steep wall). It won’t necessarily require powerful flow, but it should be close to lights (especially if they are not extremely intense).

Though these corals are primarily dependent upon upon their zooxanthellae for food energy, they likely benefit from additions of phytoplankton to their diet. They are not particularly good at feeding on zooplankton or large-particle items, however. While there are conflicting reports about the need for plankton in this coral’s diet, some experts assert that very small foods such as phytoplankton (and perhaps bacterioplankton) are critical for the health of at least some species.

Nephthea is not extremely picky about water quality, especially once it is adapted to its tank. The only issue that may come up is defensive chemicals (i.e. allelopathic chemicals)–either those secreted by the Nephthea or those of certain competing corals. Therefore, when keeping these in a “softie tank” with lots of corals that release these substances (leather corals, sinularia corals, etc.), then it would be extra-wise to add and frequently replace a high-quality granular activated carbon or other suitable chemical filter medium.

On occasion, this coral will produce a waxy film that can cover most of the body. Don‘t fret; this is perfectly normal and likely serves to remove nuisance algae and other fouling organisms. It will soon “shed its skin” and open completely up again.

There are actually a few highly desirable forms of this coral. For instance, the Neon Green Nephthea was once so popular that its demand nearly caused its extinction in the wild (thankfully, this variant is now extensively captive propagated.) One really nice variant to look out for is Biota’s Spaghetti Nephthea for its extra long, wavy lobes. Whichever type you go with, you won’t ever regret keeping this easygoing and graceful softie.