It’s both strange and unfortunate that some of the most widely occurring copepod species on Earth remain rare in the aquarium trade–particularly those that are hardy, ecologically distinct and useful in captive systems. Euterpina acutifrons is an excellent example of this. Thankfully, these things don’t escape notice at AlgaeBarn, who have introduced this highly valuable copepod species in its new 5-species live copepod product Galaxy Pods.

This article provides an overview of the species’ natural history and use in captivity.

E. acutifrons (Family Tachidiidae) is a rather common epipelagic harpacticoid copepod that has been reported from all major shallow-water marine environments aside from the Arctic and Antarctic regions. Most notable for saltwater aquarists, it is found in the tropical and subtropical zones of the Atlantic and Pacific Oceans, the Red Sea, the Arabian Gulf and the Mediterranean Sea. Conspicuous differences observed between New Zealand and Brazilian populations suggest an existence of different physiological races in this species. 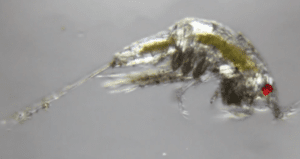 Its distribution not only includes coastal waters but also oceanic and shelf waters. While it is primarily an inshore marine species, it tolerates a wide range of salinities. It is technically neritic (i.e., living near, but slight above, the seafloor, especially in shallow coastal waters). The adults and larvae are classified as pelagic, sharply distinguishing the species from its harpacticoid brethren (which are generally benthic in habit as adults). To boot, it is one of few pelagic species having hypoplanktonic nauplii that feed on both plankton and settled organic matter.

Euterpina acutifrons is the sole valid species in the genus (the validity of E. gracilis is still disputed). E. acutifrons is distinguished from all other copepods by the spiny projection on the anterior end of the cephalothorax. Adult size ranges from 550-680 µm in females and from 500-580 µm in males. Its overall body shape is cylindrical. The head is fused with the first thoracic segment. The rostrum is uniramous and stout. It has a pronounced rostrum. The anterior of its cephalosome is sharply pointed (especially in females). Due to its pale, light yellowish-green color, it is difficult to see in a culture. It is (at least with the aid of a microscope) easy to sex adult individuals of the species. In males, the antennule are geniculate (i.e., bent at a sharp angle); females may be easily identified by a single egg sac under their abdomen. Interestingly, in culture, females outnumber males by a factor of 4. Both males and females can survive to age of approximately one month.

E. acutifrons is quite prolific, even compared to other copepods. Its larval cycle is completed within 15-16 days. Eggs are spherical, measuring 55-65 µm in size; they are enclosed in a single egg sac. The number of eggs per egg sac is 6-18. Eggs hatch in 2-3 days at 25-28°C. A new egg sac is produced within 18-28 hours. As the eggs hatch in the pouch, nauplii are released directly into water. Under extreme stress (poor water quality, rough handling, etc.), females drop the egg sac and ‘escape.’ However, so long as the eggs are mature, they can properly hatch from an abandoned egg sac. The species undergoes six naupliar stages and five copepodite stages. The nauplii are 76-180 µm long and 60-116 µm wide. Nauplii reach adulthood in ~12-14 days.

A resilient and adaptable critter, E. acutifrons is known to flourish in captive conditions. As with a lot of other harpacticoid copepods, it can be maintained in captivity in relatively stable populations. There is much interest in harpacticoid copepods due to their smaller nauplii, high rate of reproduction, generalized diet and adaptability to many environmental conditions. Aquarists also love that they help to keep the walls of the tank clean by grazing on algae and detritus. Well, that, and also that they are a great source of essential fatty acids (particularly polyunsaturated fatty acids) for fish, corals, etc. 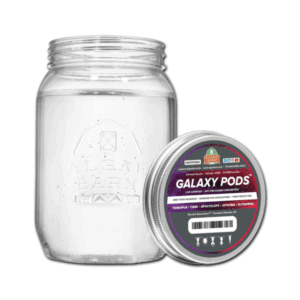 The culture conditions for harpacticoids are less demanding compared to calanoids. Here, fortunately, Euterpina acutifrons is more typical of its kind. It tolerates a wide range of temperature (1-35°C); the ideal temperature has been determined as 25-28°C. It survives salinities between 20-45 ppt (optimum salinity range has been determined as 30-35 ppt). The optimal pH range is 8-8.5.

Using drag powered swimming to get about, E. acutifrons is a relatively slow-moving species. Moreover, it tends to distribute itself evenly across the tank (though it is attracted to light, it does not concentrate nearest the light source). This tendency makes it ideal for high-density cultures. It rarely dominates over other species in culture.

E. acutifrons is a holoplanktonic suspension feeder (primarily a non-selective herbivore). That being said, it opportunistically consumes smaller protozoans such as ciliates. It most definitely feeds on a variety of algae such as Isochrysis and Nannochloropsis (the optimal algal cell density has been determined to be 20,000-30,000 cells/mL). Live algae is ideal. Studies show that best growth rates are obtained when it is fed a mixture of algal species. In one investigation of growth on mixed algal species, E. acutifrons had a generation time of 10-14 days (depending on exact temperature and food availability).

While it shares many of the desirable traits of other harpacticoid copepods, Euterpina acutifrons adds to the ecological diversity of the typical aquarium pod community due to its mainly planktonic adulthood. Hardy and nutritious, it makes a great addition to any aquarium ecosystem. And, where it is provided with a multispecies algal diet (e.g., OceanMagik), it is surprisingly prolific. What an awesome thing it is for serious reef aquarists that this hugely useful copepod is now available as part of a select consortium of live pods in Galaxy Pods!