Like all animals, the seahorse plays a crucial role in the ocean’s food webs. This article will discuss the lined seahorse and why its conservation is vital. Since we are celebrating World Oceans Month, we will highlight the ways that aquaculture has improved the waters that are home to the lined seahorse. 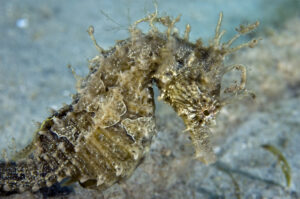 Seahorses are known for catching attention. These unusual, little creatures have very fascinating behaviors. They are unlike any other fish! Seahorses are a true sight to behold. They keep an upright posture and have a tough bodies. They also have a prehensile tail to tether onto the reef. Seahorses will not thrive in all types of aquariums. Sadly, not all have a good record of surviving in captivity. Few species have gained a solid reputation among reef keepers. However, the lined seahorse has become one of the best choices for reef keepers.

Seahorses are members of the pipefish family. The lined (or northern) seahorse can be found in Atlantic waters. They can range as far north as Nova Scotia. The lined seahorse can be found in the Gulf of Mexico, the Caribbean, and south of Venezuela. Lined seahorses prefer the warm, shallow waters in the summer. They will retreat to deeper waters in the winter. Adults can be found swimming freely in the water. They will also cling to the anchored substrate on the sea floor. Young, lined seahorses spend more time near the surface. 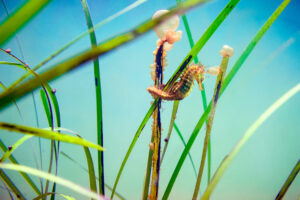 Coastal environments like bays, estuaries, and salt marshes are home to most of the populations. They like areas with heavily covered plant growth on the substrate. Seagrass meadows, macroalgal beds, and mangrove forests are all ideal homes for lined seahorses. With its horse-like head and armored, serpentine body, the seahorse is legendary in appearance. Male seahorses have a fascinating biological claim to fame. They can become pregnant and give birth! This is a unique adaptation in the animal kingdom.

Seahorses have a variety of unique characteristics. Among these are chromatophores. Chromatophores are specialized skin cell structures that allow them to camouflage. Like some reptiles, they will change color to match their surroundings.

We can look to seahorse populations to gauge the overall health of the ocean. Along the world’s tropical and temperate coastlines, there are about 46 species.

The lined seahorse is classified as “vulnerable (VU)” by the IUCN (International Union for Conservation of Nature). The IUCN determines a species as vulnerable if it is not critically endangered but faces a high risk of disappearance. Species evaluations are a valuable tool in conservation. This helps to determine the most likely level of concern for a species.

The lined seahorse uses immobility and camouflage as defense mechanisms. Sadly, they are no match for commercial fishermen using non-selective gear. They put in a great deal of work to produce a few offspring. This also limits population recovery rates. Seahorses are known to be more susceptible to ocean stresses. They are poorly distributed in nature. Without sufficient adult mobility to connect one population to another, recovery is difficult.

These peculiar fishes are known for male pregnancy and loyal relationships. Lined seahorses follow a highly structured social system. This includes pair bonding. However, disturbing a population greatly reduces reproductive output. Habitat destruction is a major issue for most endangered seahorse species in the Atlantic Ocean. 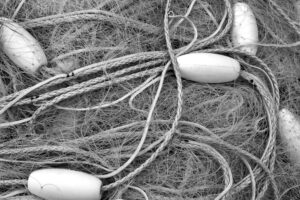 Commercial fishing gear, such as bottom trawls and nets is a major offender. They endanger seahorses by capturing all species of life clinging to substrate. Seahorse populations suffer when their coastal habitats are damaged. Sadly, most life in our oceans is under attack from the same challenges.

Although lined seahorses are widely trafficked, non-selective fishing is the major cause of declining numbers. Many populations, especially those in estuaries, are also threatened by habitat loss and destruction. Some agencies are imposing restrictions on commercial and recreational boat traffic. Therefore, many areas of the Atlantic coastline have seen improvements in overall water quality.

Why Captive-Bred Lined Seahorses are Important

Reef keepers are always on the lookout for unusual critters. To complement the reef aesthetic, we like to look for vibrant colored animals. In some systems, distinct personalities, or different physical forms are the inspiration. No matter the design, seahorses have always been sought after in the hobby. When seahorses are collected and harvested from the reef, it can take many years for the population to recover. That is, if the population recovers.

By supporting captive breeding programs, we can conserve seahorses. Captive breeding is a method of obtaining and maintaining breeding colonies in captivity. Captive populations can be maintained while natural risks are decreased. It can also serve to protect from extinction in times of natural disasters. Captive breeding also offers to boost reproductive output beyond what would be possible in nature.

A seahorse-dominated system is a setup like any other reef tank. However, seahorses are not going to be a great addition to all reef tanks. In fact, due to their natural behavior of tethering to substrate, the seahorse’s tails can cause damage to coral.

In some ways, the ideal system for lined seahorses is the opposite of a reef tank. Even so, seahorses will not thrive if specific conditions are not met. They are not forgiving of water parameter fluctuations. Anemones and aggressive LPS corals can even eat seahorses.

Some reef keepers want to mimic the natural environment of the lined seahorse. In that case, they only need to look at the refugium. A refugium has all the components to make a seahorse feel right at home! Seahorses will prefer less intense water flow than what is required in the reef tank system. They are also more forgiving of lighting intensity.

Feeding seahorses can pose challenges for the reef keeper. Although they are reared on live brine shrimp, captive-bred are easier to feed. By the time they make it to the LFS, they will have been accustomed to eating various frozen foods. Offering food to the seahorses can be challenging. This is because they are such slow, meticulous feeders.

A turkey baster or pipette will be the most helpful feeding tool. With a baster or pipette, NanoBrine and frozen shrimp can be offered. This reduces the risk of excess waste in the water. A few frozen Mysis shrimp should be fed at least daily to satisfy most seahorses. A strong population of copepods will help to supplement the seahorse’s diet. We would recommend regularly boosting the pod population with EcoPods.

To create the most ideal  system, we suggest going captive-bred. AlgaeBarn is proud to stock lined seahorses captive-bred by ORA. We have teamed up with ORA as they share our goal of a more sustainable hobby. We also offer several varieties of clean macroalgae. For example, Sea Lettuce can be used to mimic the seagrass beds. Mangrove pods also make great anchors for them to tether onto. 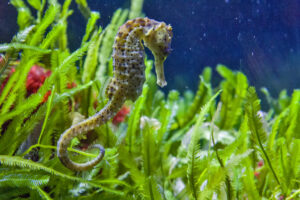 Seahorses are beneficial to both the ecosystem and our hobby. They can serve as ambassadors to promote learning about aquaculture and captive breeding. In terms of ecology, they play a

crucial role in the ocean’s food web. They consume tiny copepods and shrimp, helping to keep those populations in check. they are also on the menu of much larger predators. Invertebrates, fish, sea turtles, and seabirds all prey on seahorses. As a result, removing wild seahorses causes entire ecosystems to be disrupted.

It is our responsibility to protect these tiny creatures. We can help by reducing the demand for wild-caught and supporting captive-breeding programs. Less demand means less commercial fishing and ultimately, less damage to the ecosystem.