You are here: Home / Captive Bred Fish / Link’s Gobies in the Refugium

With perhaps 20,000 fish species inhabiting our planet, it’s hard to imagine that we’ve already fully explored the potential for each of them as aquarium subjects. Truth be told, there are probably thousands of species that have yet to be discovered in the wild. For sure, a good place to start looking for cool “new” aquarium fish is the among gobies (Family Gobiidae); claiming over 2,000 species represented in many types of habitats, you’re bound to find (with the slightest research) a handful of underappreciated species. Given that gobies are almost always easy to keep in aquaria–easily fed, forgiving of poor water quality and resistant to disease–chances are good that any new, prospective aquarium goby will thrive in captivity. Such appears to be the case with the BIOTA Link’s goby.

The Link’s goby (Amblygobius linki) is now available as captive-bred. In fact, it is highly unusual in that it appears to be available only as captive-bred. Given its natural habitat (and, well, the fact that it’s a goby), we can only assume that the species is generally tough as hell when it comes to tolerating captive conditions; these cultured stock are so exceptionally sturdy that we unhesitantly recommend them to beginners, even as their very first fish. But, as you will see, this species has a lot more going for it than its hardiness.

A. linki is distributed in the tropical Western Central Pacific from the Philippines to West New Guinea. While it is associated with coral reefs, it appears to thrive in the more marginal habits nearer land. These are typically very shallow (usually less than a few meters) waters that may be subject to relatively dramatic fluctuations of turbidity, salinity, temperature, pH, etc. This includes mud flats (especially near mangrove forests), estuaries and even coastal saline lakes.

This fish reaches a maximum length of around 6 ½ centimeters. It has a gudgeon-like body overall, with a torpedo shape, rudder-like fins and a rounded tail. It has a cream base color overlaid with three bold horizontal stripes, the middle of which passes right over (and very effectively obscures) the fish’s eye. Reddish markings often grace the dorsal fin.

The Link’s goby diet appears to be broadly omnivorous. The species is happy to sift through sediments on the sea bottom for tiny crustaceans and other random goodies, but also grazes on filamentous algae that grows on rubble rock, mangrove roots, etc.

This species is long overdue to step into the aquarium hobby spotlight. Not only is it easy to keep and quite attractive, but it also brings to the table some highly desirable feeding behaviors such as sand sifting and consuming nuisance algae. It is quite peaceful. Moreover, it is small enough to be successfully maintained in a nano tank. While it is absolutely suited in every way to inhabit the typical reef display, the best “utility” of the Link’s goby may be in the refugium.

Just consider for a moment where this fish comes from in the first place–shallow mud flats, often near mangroves, likely with patches of loose seaweeds. Sounds a bit like a planted ‘fuge, doesn’t it? 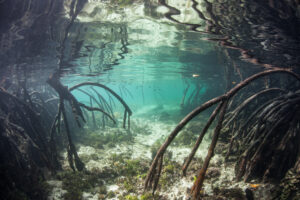 Increasingly, reef aquarists (especially SPS enthusiasts) are opting for bare-bottom display tanks. Many of these same hobbyists use a planted refugium to help maintain low nutrient levels. Of these, many compensate for the loss of a substrate in the main tank by adding a deep sand bed (DSB) to their refugium. In some respects, this makes a whole lot of sense from an oceanographic perspective; the seaward parts of shallow reefs are pounded by waves and swept bare of “soft” substrates, whereas sands and silty materials settle out in nearshore flats and lagoons. These substrates host complex communities of meiofauna and microorganisms that contribute substantially to natural carbon, nitrogen and phosphorus cycling–in aquaria just as in the wild. Adapted for a similar natural environment, the Link’s goby is perhaps perfectly fit for life in a planted, sandy/muddy refugium.

This fish can indeed help to service a refugium DSB by its constant sifting. This can facilitate the breakdown of dead copepods, uneaten food that drifts in from the main tank, etc. Sure, the pods and other small sand critters could do this too. But in refusing to allow large bits of organic matter sit on the refugium bottom for long, and especially by regularly turning over the substrate surface, the goby helps to prevent the proliferation of plague organisms like cyanobacteria. Further, its habit of feeding on hair algae can be a godsend in a planted ‘fuge where nasties like Derbesia can outcompete and eventually smother your desirable macroalgae.

And hey, you just might like the additional activity in the ‘fuge. Nothing wrong with that! Since this species is built to live in this sort of habitat, and because it doesn’t grow to a very large size, it makes an especially awesome choice of refugium fish.

Only one possible drawback, though (there’s always at least one for everything, right?). This goby will almost certainly consume many of the pods that hide in the refugium. It’ll never catch all of them, but could grab a disproportionate number of them due to its easy access to them in the ‘fuge. Especially the big dumb ones like Tigriopus. Bear that in mind if you are also attempting to keep a mandarin in the main tank!

As the hobby becomes more sophisticated, our tanks have become more specialized. For aquarists who maintain planted refugia, and particularly refugia with DSBs, The Link’s goby is definitely worth consideration. Sure, it’ll nibble that irritating hair algae and help keep the substrate surface clean. But just think about cool it’ll look zipping in and out of your mangrove roots!