You are here: Home / Captive Bred Fish / A Look at the Blue Tang

Even before that well-known cartoon character of the same species was conceived, the blue tang (Paracanthurus hepatus) was extremely popular in the marine aquarium hobby and, therefore, important in the ornamental fish industry. Whether one keeps true “fish tanks” (such as fish-only-with-live-rock (FOWLER) systems) or full-blown reef aquaria, it usually isn’t too long before this species is in their tank and checked off of their fishes-to-have list.

The popularity of blue tangs is quite understandable. Few fish possess such pure, rich royal blue hues; even fewer have so much blue. And this animal isn’t just brightly colored; it has one of the most distinctive color patterns of all aquarium fishes. A pitch-black, palette-shaped pattern runs along each side of its body to the tail. The tail fin is a vivid yellow. Part of the palette pattern forms bands that run over (and likely help to conceal) the animal’s eyes. The lower body typically fades to a paler blue, though it may be yellowish in specimens that originate from the west-central Indian Ocean. Despite some minor regional variations of body coloration, this handsome species is always quite recognizable.

Some blue tangs can reach lengths of a foot (30 centimeters). Like other tangs, its body is rounded and highly compressed laterally. It has a rather pointed snout. Its scales are tiny. Sharp spines flank its caudal peduncle (i.e. part of the body that leads to the tail). Like some (but not all) tangs, the caudal spines of the blue tang are associated with venom glands.

The species is not 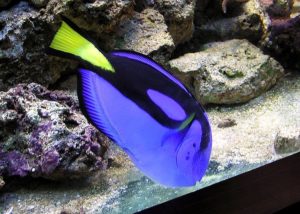 particularly abundant in any one area, but its range is very extensive. It can be widely found in shallow, clear waters across the tropical Pacific region from Japan to the Great Barrier Reef to East Africa. It, therefore, is not considered to be particularly vulnerable and is listed as a species of least concern by the World Conservation Union (IUCN). Consequently, it is exploited heavily for the aquarium industry and is easy to obtain in the trade.

Even though wild populations are not believed to be threatened by the aquarium trade, a major push to culture the blue tang has been underway for some time now. Recent advances have, in fact, resulted in the commercial production of captive-bred specimens. This is a major breakthrough, as cultured individuals of this species may be much better suited for a life in captivity than their wild-caught counterparts. This may be for a couple of reasons. For one, wild specimens are accustomed to having a lot of space to swim around in (i.e. the ocean). It could very well be that this highly active animal experiences some stress when taken from its spacious natural environment and then confined in an aquarium. Surely tank-raised individuals are a bit more adapted to life within a glass box. Also, cultured specimens may be less prone to infestation by parasites such as Cryptocaryon. Like some other tangs, this fish has been labeled an “ich magnet” on account of its small scales, flattened body shape, and a relatively thin mucus layer.

It can be a fairly aggressive—even quarrelsome—animal in captivity. Antagonistic behavior is especially common towards members of the same species. Though they may in the wild pair bond or even form small social groups comprised of up to around a dozen individuals, only single specimens should be kept in the aquarium. One blue tang is usually plenty; if healthy and comfortable, this plucky fish will be one of the most conspicuous members of the community. It is a very energetic and seemingly curious animal that can never quite settle down. It is fairly daring (especially when it comes to getting its share of a meal) and will usually learn to eat from its keeper’s hand. Even while it might at first flee at the approach of humans, it will eventually become so tame that it will enthusiastically greet its keeper (in anticipation of a treat, of course).

The living environment for a blue tang should have plenty of open space through which it can swim freely. In addition to liking lots of room to move, blue tangs also appreciate a tight spot (or two) in the reef structure in which they may squeeze themselves while they hide o 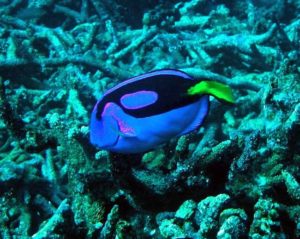 r sleep. Blue tangs will sometimes wedge themselves so tightly into rock crevices or between coral branches that they appear to be stuck. A blue tang may be possessive of its territory, so make sure that all of its tankmates each have a hiding place of their own.

Blue tangs are, for the most part, omnivorous. As juveniles, they tend to eat lots of phytoplankton, whereas adults tend to rely mainly on the grazing of macroalgae and microalgal films. Juveniles may benefit greatly from offerings of pelagic copepods such as Apocyclops. The adult blue tang’s heavy herbivory is welcomed in many reef aquaria, where the fish helps to suppress the growth of unwanted algae that may otherwise overgrow corals. Where it has completely cleaned the tank of nuisance algae, its diet can be supplemented on occasion with offerings of fresh seaweed (perhaps harvested from the refugium) such as Gracilaria.

Unusually attractive in coloration and pattern and fun to watch, the blue tang (particularly when captive-bred) makes for an ideal aquarium fish. It is almost always out and about. It is not only reef-safe, but will even benefit corals by grazing on fouling algae. Fed a varied and high-quality diet that includes a good amount of algae, this fish will be healthy and look amazing in captivity for many years.