When searching for fishes to stock a nano tank, especially for a beginning aquarist, it is quite reasonable to place an emphasis on two characteristics: A small adult size and a high degree of adaptability to captive conditions. A peaceful disposition is definitely a good trait, too–in any kind of tank, but especially in a nano tank. And yes, while the previous considerations are most important, beautiful coloration is undoubtedly a pretty desirable trait as well! 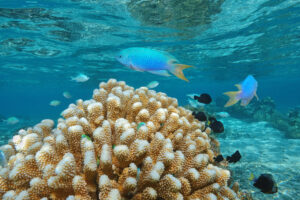 Damselfish (Family Pomacentridae) have been popular among saltwater aquarists since the dawn of the hobby. This is because they possess at least most of the above traits. Specifically, they tend to extremely brightly colored, very often with very flashy metallic blue and turquoise hues. They generally reach adult sizes of less than a few inches. And wow! are they hardy; few freshwater fish species are this tough. They indeed thrive in captivity and strongly resist the common diseases that are deadly to many other popular fish families. Captive-bred specimens are somehow even more bulletproof.

However, as group, the damselfishes are well known for their highly aggressive behavior. They are most antagonistic towards members of their own species, but can target any other fish (sometimes much larger fish) that they deem a competitor for food or territory. Even “social” and “non-territorial” damsel species can be downright brutal to each other in captivity–particularly within the confines of a small tank. Here too, captive-bred specimens are preferable as they tend to be more socialized for captive life. But ultimately, the biggest factor for levels of aggression is species. And there certainly aren’t a lot of non-aggressive damsel species.

That’s just one big thing that makes the pavo damselfish so special for aquarium hobbyists. In addition to being small, sturdy and unusually pretty, they get along quite well with their tankmates. And now, they’re available as captive-bred! As such, they make a truly awesome choice for most nano aquaria. This article provides some background on this remarkable little reef fish and also makes a couple of suggestions for successfully keeping one in captivity.

The pavo damsel (Pomacentrus pavo) is a fish of many common names. Aquarists should be familiar with all of these names, as there are many superficially similar species that share some of them. It is also alternately known as the blue damsel, azure damsel, sapphire damsel, jade damsel or peacock damsel.

The species occurs throughout the Indo-West Pacific Ocean from East Africa to Taiwan and Australia. It is, however, notably absent from Hawaii. It typically inhabits sandy, reef-associated environments such as lagoons, rubble zones and patch reefs. It has also been reported around jetty structures. It prefers depths of 3-70 feet (1–20 meters).

Pavo damsels are diurnal (e.g. active only during the daytime) and are nonmigratory. They prefer to live in small or large groups (typically around a single large branching coral head).

They grow to a size of up to 4 inches (9 centimeters). And that’s a HUGE one! They’re basically little blue jewels. This species sports an iridescent blue-green body and fins, a prominent dark earspot, horizontal lines on its head and back and dark vertical lines on its scales. Some specimens have a pale yellow color over the posterior caudal fin.

Like most damselfish, pavo damsels are oviparous egg layers. They form distinct pairs during breeding. After clearing a site for a nest, the pair engages in a mating dance with rapid swimming and fin movements. During this ritual, males can darken in shade and display white blotches. Spawning takes place at dawn. The eggs are demersal and adhere to the rocky substrate. Males dutifully guard and aerate the eggs. 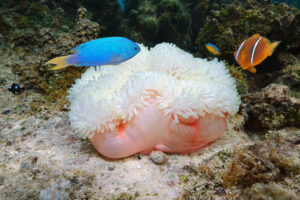 The pavo damselfish is regarded as a great aquarium fish. Curiously, they have been somewhat rare in the trade. Considering that relatively few damsels have been commercially aquacultured to date, the recent release of this species as captive-bred from Biota is especially exciting.

Hiding spaces (e.g. small caves and crevasses) in the hardscape help to discourage squabbling with its tankmates; that being said, it is considered to be peaceful and appropriate for a “community” fish set-up that includes dottybacks, hawkfish, angelfish, blennies, etc.

It eats just about anything, but a variety of foods (including algal-based foods) is ideal for this omnivore. Two or more smaller feedings per day are much better than a single, big daily feeding.

And that’s pretty much all there is to keeping this fish! Captive-bred pavo damsels are for sure among the most uncomplicated saltwater fish species you’ll ever keep. They’re hardy enough for a novice, though rare enough that even a veteran will find them interesting. Best of all, that stunning jade coloration will never get old! Sure, they definitely cost more than the average, wild-caught, common blue damsel. But you’ll be glad to have this relative rarity later on when you don’t have to dig it out of the rockwork and get rid of it for viciously attacking your other fish!