You are here: Home / Macroalgae / The BIG 4 Refugium Macros

It’s sort of hard to believe today that Caulerpa spp. macroalgae were once the only seaweed used in planted refugia. Well, pretty much the only one. And that went on for a long time. When Caulerpa use largely fell out of style by the early 2000s, refugia in general became a relative rarity.

Well, then came Chaetomorpha–seemingly out of nowhere, as if it only came to exist after some clever reef aquarist got a hold of some and determined that it could be grown in a refugium. Aside from a few notable improvements in algae reactor and algae scrubber design, the fast-rising popularity of “chaeto” did much to return the refugium to the forefront of modern saltwater aquarium husbandry.

But this time, things have been different. Planted refugium keepers have been far more adventurous in their experimentation with diverse seaweed species. Perhaps quite predictably, different seaweeds have proven ideal for specific applications.

Lots and lots of macroalgae have been traded within the industry. But a small handful have risen to the top for their overall great qualities ranging from nice appearance to ease of cultivation to capacity to take up excess dissolved nutrients. These, the “big four” as we like to refer to them, include the ever-versatile Chaetomorpha, the crop-like Ulva, the robust pom-pom and the dainty red ogo.

This article takes a look at each of these four macroalgae and describes their various advantages when used in planted refugia. 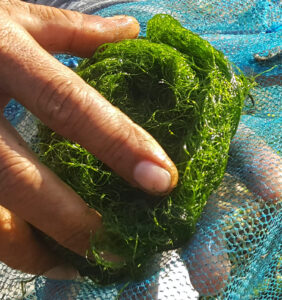 Here’s a macro that is apparently worth its weight in gold. Sure, we do hear those stories from LFS workers of customers who come in with buckets of the stuff to trade (not unlike the caulerpa days). And they are true. Yet, there is hardly a glut in the chaeto market. Why? First of all, this macro is in very high demand. It can be used in various types of reactors and scrubbers as well as refugia.

But the supply is typically moderate, at best. This because a lot of keepers have difficulty growing it. Some even see it crash from time to time. What’s going on here? There are a few reasonable explanations for this. In some cases, it seems that this macro can overdo its job, stripping nutrients from the water rapidly; it doesn’t like starvation conditions, and can suffer when not in very fertile water. Another issue is lighting; even if you have plenty of (or even too many) nutrients in the system, these macros cannot grow well unless provided with extremely bright illumination.

Due to these shortcomings, many aquarists find themselves replacing chaeto, which serves to keep a major strain on the supply (even for those who can grow it fairly well).

Chaeto is a great choice for a system for systems with consistently high nutrient import (for example, those with a high density of fish).

Some Ulva spp. macros are disliked for their sometimes invasive growth rates. Ulva lactuca, known as sea lettuce, happens to be one species that grows easily in aquaria but nevertheless does not invade the main tank and outgrow corals.

This green algae is like chaeto in that it requires fairly high light intensity for good growth/survival. And while it resembles chaeto also in its preference for high nutrient levels, it seems to be more tolerant of periods of starvation. Researchers have speculated that sea lettuce (and perhaps many others in the genus, which exhibit strong seasonal growth characteristics) can stockpile food/nutrient reserves internally during times of abundance.

Indeed, this stuff is often quite prolific in planted refugia when grown under intense lighting. A water flow that turns over the algal mass helps to maintain high productivity, as this exposes more biomass to the light. However, because sea lettuce has such soft fronds, it easily gets stuck against drains in high-flow situations. Therefore, the keeper often must get a little creative in creating the perfect flow that keeps the mass moving while avoiding blockages.

One very nice trade-off with respect to this seaweed’s soft body is its palatability. Not only humans love to eat it! As it grows and must be removed from the ‘fuge, you can feed it out your herbivorous fish and invertebrates. What better way to turn wastes into assets than to convert unwanted excess nutrients into a highly nutritious live fish food?

Red seaweeds of the genus Gracilaria have proven to be excellent refugium macroalgae. Among the most adaptable is the pom-pom macro Gracilaria hayi. Pom-pom simply is tough as nails, and reliably so. Like many red algae, it doesn’t present the stringent lighting requirements of its green cousins. It also doesn’t require heavy fertilization. Thus, this is a fantastic choice for the mature and stable system, where the keeper just wants to keep nutrient levels low and “in check.” In these situations, it isn’t such an issue that this macro is a slower grower; in fact, many keepers might actually appreciate being free from the need to frequently harvest it.

Pom-pom is similar to chaeto physically in that it can withstand a strong water flow while retaining its shape (and therefore resist clogging intake drains). On the other hand, its hardened fronds make it resistant to herbivory. We’re talking about a double edged sword in this case; it’s tough (and pretty) enough that it can be used in the display where only the most determined herbivores (e.g. sea urchins) might eat it. But yeah, that means you can’t feed it out to the pickier herbivores like small blennies, Centropyge spp. angelfish, boxfish, juvenile batfish, etc. 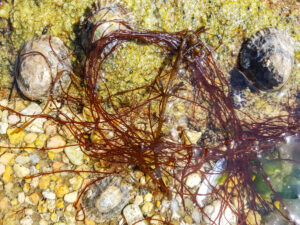 Red ogo is another seaweed from the genus Gracilaria (G. parvispora). Unlike pom-pom, it is fleshy with long, stringy fronds. It is indeed quite palatable and certainly can be fed to your fish!

This soft red algae grows well under moderate lighting but requires a moderate to low water flow (unless tumbled as to avoid drain clogs). Red ogo can grow rather quickly for a red algae and does work well to remove nutrients from aquarium water. And, with its flowing, fiery red fronds, it’s actually quite easy on the eyes as far as seaweeds go. However, most ogo users cite its palatability/nutrition as its big “selling point.”

Everyone’s aquarium system is unique. And, even a single system can change a lot over months and years. As your needs change, you might add or replace macro species in your planted refugium. You might even mix them to multiply their benefits. With respect to water flow strength, refugium lighting intensity, macro growth rates and the need to feed herbivores, the above four seaweeds offer at least one good choice no matter where your tank and its occupants are along the way!