You are here: Home / Beginners Education / How PNS ProBio works in the Ultimate Galaxy Pack

Using minimally processed or live foods like those in the Ultimate Galaxy Pack, may be the simplest and safest way to bring nutrition to the reef tank while producing the least amount of waste. Live foods like PNS ProBio also have the advantage of being nutritionally 100% intact. And maybe most crucial, many live foods cut down on waste products in the reef tank.

With the Ultimate Galaxy Pack, AlgaeBarn delivers the complete base of the marine food web to the reef tank system. This cost-effective bundle provides a genuine buffet of carefully chosen foods for both detritivores and planktivores. 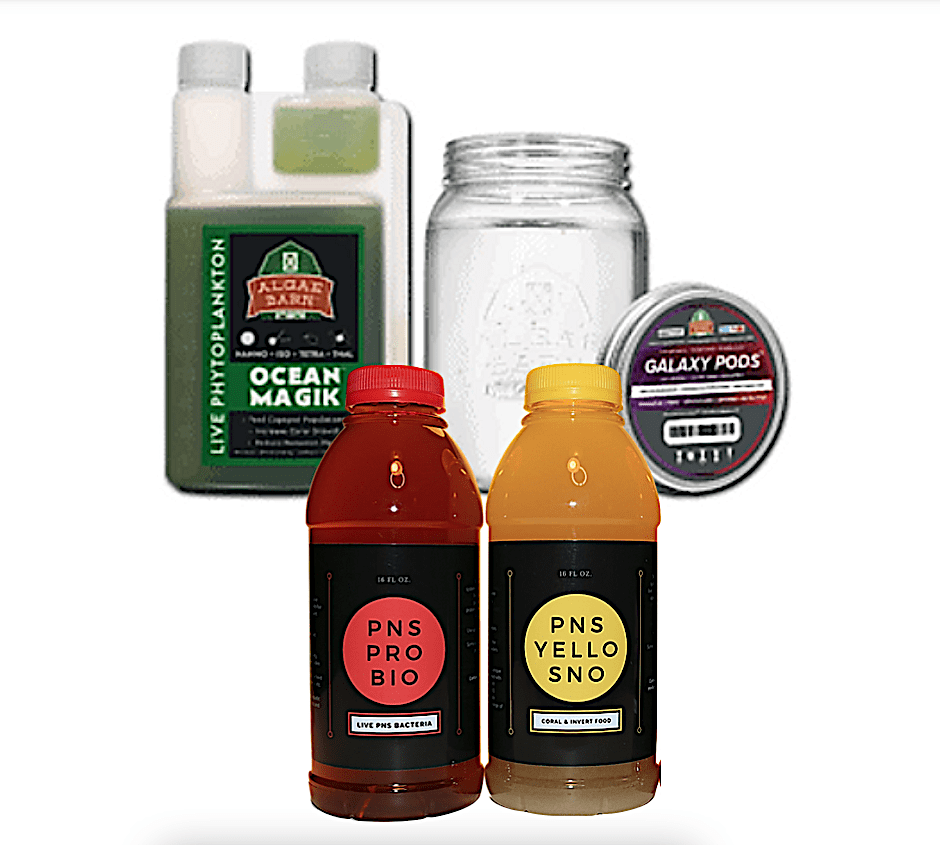 It doesn’t end there, though! In both aerobic and anaerobic regions of the marine ecosystem, PNSB have been shown to remove ammonia, nitrite, nitrate, and phosphate as well as dissolved and particulate organics like detritus.

Recently, there has been a lot more focus on the inner workings of microbial food webs. Studies on the applications of purple non-sulfur bacteria (PNSB) have been especially fascinating in the field of commercial aquaculture. As a result, our industry has begun to implement PNSB in reef tanks with amazing results.

Simply put, this microbe is a powerhouse! In this article, we are going to highlight some of the ways that PNSB works in the reef tank system.

As you might have heard us say, the ecosystem of the coral reef is diverse. Residents of the coral reef eat an enormous array of meals collectively since they have some of the highest biodiversity on our planet. The Ultimate Galaxy Pack includes a hand-picked mix of live feeds, giving the reef tank even more balanced nutrition and a wider range of food particle sizes.

PNSBs are very old microorganisms estimated to have first appeared on earth between 3.2-3.5 billion years ago. These bacteria can be found both on land and at sea. Being able to use all four major metabolic modes—chemoautotrophy, chemoheterotrophy, photoautotrophy, and photoheterotrophy—they are praised for their resilience. 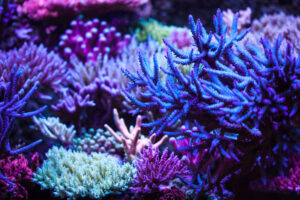 or both (photoautotrophs). However, they are the most critical as photoheterotrophs. PNSB do best in conditions with little to no oxygen, moderate light, and a lot of organic materials. Yet, they can still thrive in aerobic situations. In fact, they are cited as one of the most metabolically adaptable species ever studied.

The microbe, Rhodopseudomonas palustris, is most likely the one PNSB species with the greatest distribution. R. palustris lives almost everywhere! It is found in swampy soils, the surfaces of plants and algae, even the innards of inverts like sea anemones. These rod-shaped microbes are found just about all over the planet!

Within reef tank systems, R. palustris can colonize a variety of microhabitats. Most of the time, R. Palustris moves away from oxygen and toward light to carry out photosynthesis. However, this strain also moves about in search of an organic source of carbon.

Perfect conditions exist for PNSB just beneath the sand bed’s surface or superficial layers of live rock. Light barely reaches this area of the coral reef ecosystem. An ideal barrier to oxygen is a biofilm of aerobes. Pieces of detritus trapped in the rock and the spaces between sand grains, provide a rich source of food.

This is not just any kind of live food! The PNS ProBio used in conjunction with the Ultimate Galaxy Pack is a different type of live food. First, this is a living culture that will colonize the sand bed and the water column. And as we said earlier, PNSB is even found inside the stomachs of animals (as a probiotic). Also, most of the bacteria it contains are free-living, highly mobile bacterioplankton. Today, we are very aware of the probiotic and nutritional benefits of dosing R. palustris.

Besides having a high protein content, astaxanthin and other color-enhancing carotenoids are produced in large quantities. These tiny cells are the ideal diet for fine particulate filter-feeders. Sponges and some pods (especially Oithona) will benefit from regular PNS ProBio feedings. 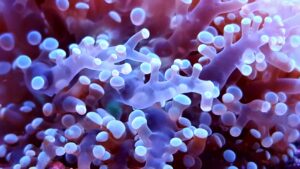 OceanMagik and PNS ProBio make a great team in reef tank cleanup. The live phyto in OceanMagic break down ammonia, nitrate, and phosphate from the water before they are consumed. While PNS ProBio’s photoheterotrophic bacteria absorb waste compounds while also using the waste as a carbon source.

The carotenoid profile in OceanMagic is greatly fortified by the addition of PNS ProBio. This improves coloring and health of coral and inverts. This duo also introduces antioxidants to the reef tank system. These probiotic microbes have been known to stop the growth of harmful bacteria like Vibrio. Pods eat these microbes and transfer these materials up the food chain. The oithona pod species found in the Ultimate Galaxy Pack prefers tiny food particles like bacteria. It has also been discovered that many zooxanthellate corals can absorb these microbes for use as symbiotic nitrogen-fixers.

With the introduction of R. palustris into the reef tank, we can offer live bacterioplankton as small as 1-2 microns. The critters that inhabit our reef tanks including fish, corals, and inverts, are very diverse. And their dietary needs are radically different, too. However, one trait that unites animals in general is that they struggle to synthesize several essential nutrients. Therefore, many of these nutrients must come from diet. These compounds are mostly created by bacteria or algae and then transported through the food web. For instance, many essential fatty acids are produced by phyto and then ingested by copepods, which are then eaten by corals or small fish. 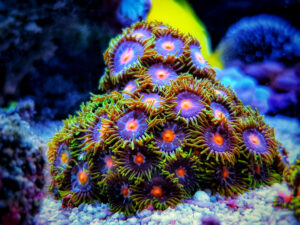 Some of the reef tank food bundles available are simply a mix of random components. The Ultimate Galaxy Pack, on the other hand, is a complete reef diet—a live feeding system—showcasing the greatest live foods available. With this bundle, it is finally possible to create the cleanest, healthiest, and most diverse reef tank imaginable. The Ultimate Galaxy Pack makes it simpler and less expensive to provide proper nutrition to the reef tank! The live phyto and bacterioplankton in this bundle are more than just great sources of food. These critters also self-clean the reef tank system, enhancing water quality with each feeding.

Using live foods like those in the Ultimate Galaxy Pack, may be the simplest and safest way to provide dense nutrition to the reef tank while producing the least amount of waste. Live foods also have the advantage of being nutritionally 100% intact. The Ultimate Galaxy Pack contains live organisms that help to improve water quality. PNS ProBio and OceanMagik make a great team in reef tank cleanup. Live phyto works to break down ammonia, nitrate, and phosphate from the water before they are consumed by filter-feeders or pods. 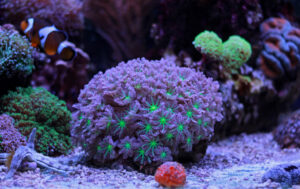 Also, most of the bacteria this bundle contains are free-living bacterioplankton. The Ultimate Galaxy Pack is the cleanest, healthiest, and most diverse live feeding system imaginable. Live phyto and bacterioplankton are more than just great sources of food.

We hope this has helped to shed light on the ways that PNS ProBio works in the Ultimate Galaxy Pack. Let us know in the comments below how this bundle is working in your reef tank!