Aquarists–especially reef aquarists–tend to hold to extremes. We can be quite passionate when it comes to our preferences for husbandry techniques, types of lighting, even brands of salt. And no subject has spawned as much debate over the last quarter century than substrate (or lack thereof).

In one corner, we have the pro-substrate old-schoolers Dr. Walter Addy and Dr. Jean Jaubert (of the Smithsonian National Museum of Natural History and the Monaco Aquarium respectively). In the other corner we have another oldtimer, anti-substrate home aquarist Peter Wilkins.

Substrate is a refuge 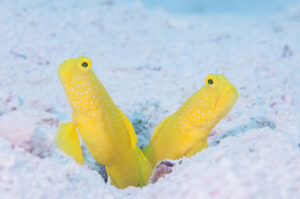 Adey, a research botanist, had developed and patented the first algal turf scrubbers in the 70s while serving as Director of the Marine Systems Laboratory at the Smithsonian. Technical and practical issues with scrubbers, particularly among home aquarists, led him to develop the “refugium” (a term he coined himself). While a conspicuous feature of his refugia was, of course, a dense bed of macroalgae, another, inextricable, feature of these systems was a deep sand bed. While one expressed aim was to provide additional “refuge” to small crustacea such as copepods, their typically thick depth was meant also to create a large anaerobic zone. This anaerobic zone, at least in theory, would promote the growth of denitrifying bacteria which would further reduce nutrients by converting excess NO3 into nitrogen gas.

Jaubert suggested that we could further promote denitrification by constructing what he termed a “plenum system” within the substrate. Curiously, this system (popularized in the early 90s) creates an isolated pocket of water beneath a platform, similar to an undergravel filter screen. A thick bed of gravel was placed over the partition. A very fine screen mesh material was placed between this layer and an upper layer of finer sand (the fine screen was intended to prevent disruption of bed by excluding burrowing activity by fish, shrimp, etc.). Despite having patented this system, Jaubert now hesitates to strongly promote its use. To make a long story short, after years of widespread use and experimentation, it didn’t seem to do a damned thing. Not bad, but not good, either. And, while they were intended to create a naturalistic biological condition in the tank, by preventing the important ecological activity of sand burrowing they inadvertently did just the opposite. Plus, some aquarists (including this author) felt that always needing to be extra careful to not disturb the delicate upper layer was like having to dance on eggshells.

Wilkins was a very early proponent of the so-called Berlin system of aquarium keeping. It claimed to employ a natural maintenance philosophy, as it delegated biofiltration exclusively to live rock; however, it nevertheless relied very heavily technology such as protein skimmers. While bare-bottom tanks (i.e. a lack of substrate) weren’t necessarily an essential feature of this approach, Berlin system adherents gradually reduced substrate depth until many examples had none at all. Some keepers simply spread a very thin layer of sand over the bottom glass for aesthetic purposes. The idea here was that detritus is extremely harmful and will accumulate within the tiny interstitial spaces between sand grains. Wilkins himself used a truly bare-bottom approach at least during some period of time; he was known to regularly stir the bottom free of settled particulate organic matter with a long rod.

Just as the Berlin method was really gaining more ground (perhaps coinciding with the increasing interest in SPS-type corals), Leng Sy threw a curveball with his development of a product called Miracle Mud®. This product is (you guessed it) made primarily of mud (though it is supplemented with certain trace elements). These silty substrates were to be used either in a refugium or in a display system called the Ecosystem Aquarium®. They were said to be especially useful in refugia, and in planted refugia particularly, because they seem to release minerals and trace elements known as essential to many macroalgae. Because these sediments pack tightly as they settle, detritus is much less likely to accumulate within them; yet, they provide an excellent habitat for burrowing animals. At least in theory, they support strict anaerobic zones and thus should encourage growth of denitrifying microbes. Early success with Ecosystem Aquarium® set-ups and an emerging interest in keeping mangroves has kept this–and similar–muds on the market. 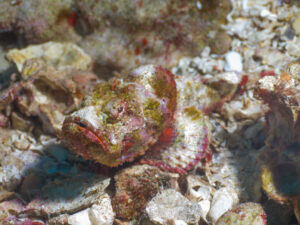 Even though we aquarists can exhibit extremist tendencies, it doesn’t mean that we can’t compromise or even find ways to enjoy the best of both worlds. In the case of substrates, this is especially so. The first thing to consider is which type of substrate makes the most sense for the kind of system we wish to build. Especially if we intend to base the system on some specific natural habitat! For example, if you want to build an SPS-dominated system, then a sandy or muddy substrate might not make sense; for one, these corals come from high-energy reef areas where strong current often carry away much fine sediments and leave only heavy rubble behind. Thus, you might use just a thin layer of course gravel over the bottom or even go bare-bottom. HOWEVER, this same system could include a refugium with a deep sand bed. This would allow you to still have cool burrowing animals and maybe even exert extra control over NO3 levels. Want to keep mangroves? Maybe consider mud instead.

Point is, we have many more substrate materials available to us today. Just look at the huge variety offered by companies such as CaribSea alone! These additional options come just as aquarists are increasingly focusing on “biotopes” and further help to specialize the living environment as to provide the best possible home for specific ecological categories of livestock. The many experiments carried out by, and products/techniques developed by, aquarium giants of the past have proven that there is more than one way to create a beautiful and highly functional reef aquarium!