You are here: Home / Advanced Education / Building and Maintaining a Peninsula Tank

Unlike other types of animal enclosures (bird cages, rabbit hutches, etc. ), an aquarium is a piece of exhibitry. Often, the keeper will go through a considerable amount of work and expense to build an attractive aquarium system that showcases not just the aquascape but also the cabinetry. In recent days, any home aquarist can go full-on designer even with the plumbing and filter components. For sure, presentation is a huge factor in an aquarist’s choice of material, style, color and so on. 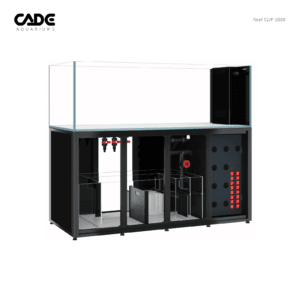 Nothing has a bigger impact of presentation than placement–in other words, how the tank is positioned. Not that there are many choices here. Whether pushed back against the wall in a parallel fashion, or built entirely into the wall, most aquaria are positioned to be most easily viewed towards the wall. In somewhat rarer cases, a square-based lowboy or hexagon might be positioned in the middle of a room. But it’s pretty hard not to like a “peninsula” (or “wing”) position.

From a purely interior design perspective, peninsula tanks are a great way to break up a large open space in a room and create a dramatic focal point (a hell of a room divider, you could say). But in considering the tank as a piece of exhibitry, peninsulas are also advantageous in that they significantly enhance viewing. At the same time, and in much the same way, they are also a bit more accessible during routine maintenance.

This article looks at these advantages–as well as a couple disadvantages–of a peninsula set-up. It also takes a peek into the Cade line of All-In-One aquarium systems designed specially for use in peninsular applications.

Perhaps the coolest thing about a peninsula aquarium set-up is the fact that you can view it from three sides. Not just each long side, but you also get a really nice deep view through the exposed short side. Some keepers also love that instead of having a black or blue dead-end background, you can see through the tank’s long sides into the other side of the room. And yeah, there definitely is something extra appealing about a fish hovering or soft coral waving around freely in the deep open space; you can almost forget the glass panels are there between you, the tank inhabitants and the room beyond. A really striking display!

It also presents the keeper with more aquascaping opportunities. A peninsula can be thoughtfully and meticulously aquascaped from both long sides rather than just one. We do lose some viewing of the hardscape if the rock is piled against the unexposed side panel (i.e. nearest the wall), but overall there’s a lot more rock surface shown. In this respect, it’s almost like doubling the size of the tank!

In some cases, you might also enjoy the opportunity to show the tank up close to more people at the same time. Generally, a peninsula allows for comfortable simultaneous viewing by about twice as many individuals (handy for when you throw those big dinner parties for your local fish club perhaps?).

When performing maintenance on a tank that is positioned with its long side against the wall, reaching the back can get frustrating. Especially with larger tanks. This includes the interior as well as the exterior. First, if anything falls behind into the rockwork, retrieving it is a huge pain (trying to catch an animal back there is even worse). And that no-man’s-land between the back of the tank and the wall? Pretty much the only thing that’s easy to do back there is grow dust bunnies.

In contrast, a peninsular set-up greatly facilitates maintenance from target feeding to algae scraping to siphoning detritus. And an easily maintained tank is usually a better maintained tank, right?

Like most everything, setting your tank up in a wing position can have its drawbacks. An obvious one, at least in terms of appearance, is that most tank stands are made to be seen from one side only. Here, the “back” side of the stand is either completely closed (meaning you can’t get inside the stand from there) or it has a big gaping opening without a door (which is annoying if you’d rather conceal the equipment, contain light from the refugium, dampen pump noises, etc.). It might even be unfinished!

Another, more serious, consideration is whether or not a peninsula tank might obstruct the path of highly active kids or pets. We probably all agree that collisions of bodies and objects with the tank or stand is a bad thing. Beyond that, the extra commotion around the tank might stress especially skittish fish.

Made to stand out 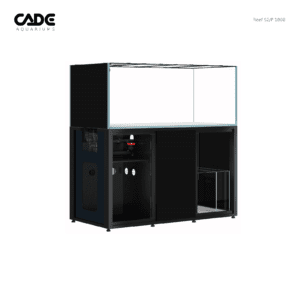 The Cade Peninsula Series aquaria (and yes, even their stands) are specially designed to be set up in a wing position. Only the side panel has a background. A very well-made overflow system is situated on the side, leaving both long panels completely open and unobstructed. The illusion of a slice of sea projecting into the room is enhanced by the rimless construction, precision applied Whacker silicone and super high clarity Opti-Clear glass. Its built-in power plug ports (16 in all) are convenient on any system, but are especially sweet to have on a peninsula system.