You are here: Home / Advanced Education / Blue Hypnea: The Next Hot Refugium Macro?

Though it sells out quickly when available, blue hypnea is out there for the grabs. And it’s well worth it for those that cater to its needs! This gorgeous plant can really spice up a refugium; it can also be displayed in the main tank (assuming no large herbivores are present) because it cannot overgrow corals and clams. Either way, its unusual colors always catch a good share of attention.

Hypnea spp. belongs to Order Gigartinales and Family Cystocloniaceae. The Hypneaceae are relatively small group, represented only by Hypnea and its tiny parasite Hypneocolax. However, though not particularly speciose, these seaweeds occur widely and abundantly across tropical seas. Though they prefer warm waters, some Hypnea species may be found as far north as Massachusetts. 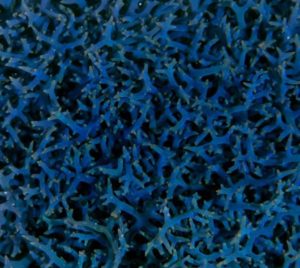 Though it is a red alga (i.e. Rhodophyte), Hypnea pannosa may occur as green, purple, red or blue. However, bluish iridescent varies of the species are especially prized by marine aquarists. Most or all of the blue hypnea available in the trade to date is aquacultured and originates from Micronesia.

Also known as bushy ball red seaweed or tattered sea moss, Hypnea pannosa is sometimes mistaken for purple Ochtodes spp. algae from the Caribbean, which it superficially resembles. This plant-like algae grows in bushy clusters. Its thallus is prostrate and reaches only around 8 centimeters in height. It cylindrical branches terminate in spiney lateral branchlets.

In nature, this beautiful seaweed prefers rocky habitats exposed to moderate wave action. It may be encountered stuck between rocks or seagrass blades in relatively sheltered high subtidal or lower intertidal zones where salinity does not drop significantly. It tends to grow in very dense mats and only loosely attaches to rubbly substrates. It may form dense, loose balls of around 7 centimeters diameter; mats may cover over 20 centimeters diameter.

While Hypnea pannosa is a carrageenophyte (that is, produces the polysaccharide carrageenan), it does not appear to be all that important in the carrageenan trade. It is, however, used for food, medicine and fertilizer in some parts of the world (if only they knew how much it’s worth to the average reef aquarist, right?). 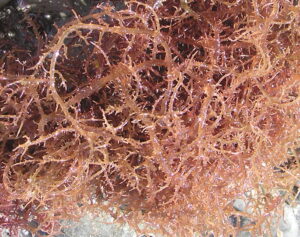 A key characteristic of blue hypnea is that it is slow grower. This might be seen as a either a good or bad trait, depending upon what the keeper wishes to do with it. If you’re aiming to use it to assimilate excess nutrients, and you typically have high nutrient levels, then you might opt to use a faster growing green algae such as sea lettuce or chaeto. On the other hand, if you want to use this macro as a highlight in the planted ‘fuge, or especially in the display tank, then you’ll appreciate its modest growth rates–less pruning!

Hypnea grows well under a variety of light intensities and spectra. However, to get healthy growth and the best appearance, most sources suggest bright full-spectrum lights. Place it in an area of moderate water flow. Don’t let the water temperature get too high. And don’t let the salinity get too low. Like most other rhodophytes, this macro likely thrives when iodine is supplemented regularly. And like other slow-growing macros, older fronds can get covered with epiphytes (i.e. algae that grow on other organisms); a healthy population of harpacticoid copepods (such as Tigriopus and Tisbe) will help ensure that this is prevented.

When attempting to establish attachment to the substrate, it is easiest to tie clumps onto chunks of rubble rock with monofilament line. Otherwise, water flow and the activity of larger animals will constantly dislodge the mass, leaving it tumbling over the corals or stuck to a pump intake. Over time, it will securely anchor to the substrate on its own and the tethers may be cut/removed.

Due to its slightly more difficult care, its slower growth and its higher market demand, Hypnea can be harder than some macros to find. But man is it worth the wait! Its shiny iridescence and royal blue pigments make it an instant stand-out in any display tank or refugium. Though it requires a little more care to cultivate, its beauty is ample reward in and of itself. As the popularity of planted refugiums continues to grow, we’ll probably see plenty of other cool species appear and cause a sensation. But for sure, blue hypnea will always remain a beloved “classic.”