You are here: Home / Advanced Education / 3 Brackish Fish for the Marine Aquarium

Sandwiched between the freshwater and marine realms, and often capable of venturing into both, brackish water fishes are extraordinarily interesting from both a behavioral and ecological perspective. While a relative few brackish species are available in the aquarium fish trade, even fewer are commonly kept. This may be because relatively few aquarists maintain dedicated brackish biotope aquaria. That’s a little puzzling, given that these aquaria offer a little of the best of both worlds; they’re exotic-looking, you can get some truly weird and interesting fish for them and you can even grow a handful of salt-tolerant aquatic plants in them. But, perhaps aquarists are predominantly all-or-nothing sorts of folks? In other words, “If I can’t keep any aquatic plant I want, forget it. If I can’t keep any corals, forget it.” 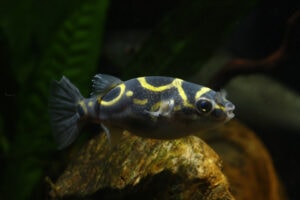 Well, at least a solid majority of brackish fish species are euryhaline. That is, they can survive in a wide variety of salinities, sometimes from pure freshwater to full seawater. Extreme examples include anadromous fishes (which spawn in freshwater but grow out in the ocean) as well as catadromous fishes (which spawn at sea but grow out in freshwater). However, the majority of brackish species (both fish and invertebrate) either live their whole lives in brackish waters or spend their juvenile lives there, only to migrate to sea as they mature. Owing to the habit of these latter species, brackish environments are frequently referred to as “nursery habitats.”

We here look at a few brackish water fish species with very different morphologies, behaviors and natural histories. But each can be maintained in marine aquaria (certain kinds, anyway)!

The figure-eight pufferfish (Tetraodon ocellatus) is an adorable looking fish. But, as often is the case, looks can be deceiving here. While sort of peaceful (at least compared to many of their puffer brethren), these fish can be very aggressive and wreak havoc among your slower fish as well as many inverts. They most definitely cannot be trusted around shrimps or mollusks of any kind. Maintained with robust tankmates in a FOWLR fish community, the figure-eight is fun to keep.

As it moves between freshwater, brackish and marine environments, it undergoes a number of dramatic physical and physiological changes (gills, kidneys, etc.). In its native habitats throughout Southeast Asia, it may be found in all types of water as an adult, but is generally found in freshwater. However, it exhibits strong euryhalinity and clearly is adapted to survive in saltwater (including hypersaline conditions).

Most specimens in the trade are juveniles (considerably smaller than their maximum length of eight centimeters). They have a white belly and tail, often with a silvery sheen. Their backs bear a number of black dots (hence their other common name, eyespot pufferfish). The eyespots are edged with bright yellow-green. Often, they bear two large spots that are close enough that the margins combine, creating the figure-eight pattern for which they are usually named.

The brackish mono argentus (Monodactylus argenteus) is no stranger to the freshwater aquarium trade. Still, far too few aquarists realize that this species requires an increasingly higher salinity as it ages. In other words, while juveniles tolerate saltwater, adults require saltwater. Because of its seafaring nature, this species is widely distributed across the Indian Ocean from the Red Sea to the Mekong Delta to Australia. 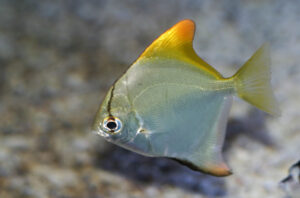 Monos look something like a cross between a butterflyfish and a young batfish; they may actually represent a bridge in the lineage between the two. It behaves more like a butterfly as a youngster and a batfish as an adult. Solitary as a juvenile, it grows to a fairly large size (27 centimeters length) and forms shoals.

Monos make nice additions a marine aquarium, including a large reef tank. They are, however, considered to be reef-safe with caution due to their adventurous palate. In general, they pose no threat to reef inhabitants and might even assist the clean-up crew by consuming detritus.

In any case, this fish requires a roomy tank, as it is not only big, but also is quite active. Housed properly, it is spectacular to behold, despite its lack of gaudy colors. For sure, its silvery body and golden fins are plenty flashy, especially under bright lighting. For aquarists who enjoy lots of action, this busy swimmer is a real treat.

Spotted scat: Fab in the FOWLR

The spotted scat (Scatophagus argus) is also a popular brackish aquarium fish, though it is rather underrepresented in saltwater tanks. This one too is a bit like a butterflyfish, though it is more like a cross between a butterflyfish and a rabbitfish (particularly for its venomous spines). Most aquarists love this fish for its metallic green base color and numerous black polka-dots.

Spotted scats are distributed all over the Indo-Pacific Ocean from Japan to New Guinea to Southeast Australia. However, they have at least a couple regional variants, namely the green and red (or ruby) scat. It lives in freshwater as a juvenile but moves into saltier waters as it matures.

Strangely, though their name implies as much, scats have not been confirmed though diet studies to feed on feces. They are, however, pretty accepting of most foods. Maybe too much so, as they are best regarded as not reef-safe. It appears that juveniles prefer zooplankton, whereas adults are more herbivorous. Interestingly, they are purported to eat Aiptasia pest anemones; that being said, the risk they pose to reef tanks suggests that they are best kept in a larger FOWLR setup. Indeed, its maximum length of up to 38 centimeters makes it a great tankmate for adult pomacanthid angelfish.