You are here: Home / Other / What Does pH/Alkalinity Actually Mean?

“Some aquarists delight in testing the water for its pH. If you must do this (and believe me it is not necessary), then use the standard pH papers which give colour readings. If the pH reads as low as 7, then you can add a small amount of lime as lime water until the acidity is corrected… we are convinced that the chemistry of sea water is best left untouched in small home aquaria.”

Marine aquarium keeping, and especially reef aquarium keeping, have come a long way. It’s almost incomprehensible that there was ever a time at all (much less only a couple of generations ago) that any hobbyist (much less any published authorities) believed that pH is unimportant–nominally so unimportant, in fact, that it might be silly to even test it. If some aquarists from yesteryear (can we call them “pH-deniers” or maybe “anti-pHers”?) could not be convinced that pH matters, then it may be pretty safe to assume that they paid no mind to alkalinity either.

Today, every saltwater aquarist understands well that both pH and alkalinity play a direct and utterly critical part in the health of all marine life. The knowledge (complete with data) is certainly there, and the negative impact of low pH/alkalinity is pretty easy to see as well. Nowadays, we all get it.

But not everyone understands what pH/alkalinity values actually tell us about our water. For some, acidity-basicity may as well be some magical, yin-yang duality to “balance.” We realize that not everyone wants to get too deep into chemistry–many just want to enjoy their beautiful pets and, to whatever extent possible, leave it at that. But a fundamental understanding of these parameters certainly helps to notice/avoid water quality issues ASAP and is therefore quite worthwhile. As such, we here present a layperson’s overview on the topic. Bear in mind, if you will, that the concept of pH is rather complicated and the following is but a mere overview. 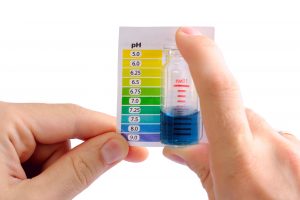 Water is the universal biological solvent. No known organism can complete its life cycle without it. Therefore, it is critical understand how water behaves chemically. Early scientists absolutely understood this; it is why they developed the pH scale.

Water (H2O) is made up of just two elements: Hydrogen and oxygen. Specifically, a water molecule is just a couple of hydrogens attached to central oxygen. Water breaks up pretty readily into more simple components, only to reattach to each other or other “broken” water molecules. These pieces include a hydrogen ion (H+) and a hydroxide ion (OH-). The pH scale is a measurement of the relative concentrations of hydrogen ions and hydroxide ions in a given solution.

In some ways–being as the scale measures hydrogen ions–the concept of pH can come across as counterintuitive. This is due to the fact that the more hydrogen ions there are in a sample solution, the lower its pH will be.

Another aspect of the pH scale that can be perplexing to aquarium hobbyists (maybe even some biologists) is its logarithmic structure. Interestingly, the way the scale was set up, each unit denotes a tenfold change in hydrogen ion concentration. Thus, a change in pH from 6.0 to 7.0 means that hydrogen ion concentration decreased by a factor of 10. At pH 8.0, there are only a hundredth of the hydrogen ions present than at pH 6.0.

Some substances contain neither H+ nor OH- but nevertheless affect the pH of a solution. Sodium bicarbonate (NaHCO3), for example, breaks into sodium ions (Na+) and bicarbonate ions (HCO3-) when dissolved in water. Solutions of sodium bicarbonate are slightly basic (around pH 8.4). However, unlike acids and bases, sodium bicarbonate solutions don’t exhibit dramatic shifts of pH value with changes in concentration.

Even more remarkably, the addition of acids or bases to a solution of sodium bicarbonate generates only relatively small changes in pH. Therefore, sodium bicarbonate (HCO3- in particular) acts to stabilize pH; that is, it buffers the solution against pH change. The capacity of a solution to resist pH change is referred to as alkalinity. While many substances act as buffers, bicarbonate is the principle buffer in natural seawater and therefore is the buffer of main concern to marine aquarists.

As buffers get depleted, they must be replenished before the threat of wild pH swings can occur. Replenishment can be accomplished by dosing bicarbonates mixed with a few other important buffers. However, the simplest and easiest way to maintain your buffering capacity is through frequent water changes; this not only replaces depleted buffering compounds but also reduces the build-up of the acids that deplete them. Incidentally, in reef aquaria, alkalinity can drop rapidly due to the growth of the coral skeleton (which is composed of calcium carbonate). 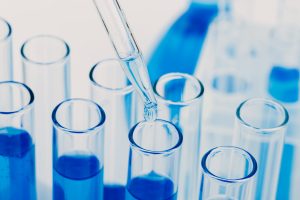 Regardless of what some of the old school marine aquarists have said, maintaining proper pH and alkalinity is irrefutably crucial in maintaining the good health of all aquarium flora and fauna. Period. Almost all key biochemical reactions at the cellular level depend upon proper pH to occur. Even small changes in pH can harm or kill most marine life.

While a pH of 8.0 to 8.4 is considered acceptable, one should aim for values between 8.1 and 8.3. Even then, try to stick to a specific value, as pH stability is ideal. A little extra attention to this hugely important parameter goes a very long way in keeping happy aquarium animals!