You are here: Home / Beginners Education / What are Coralline Algae? 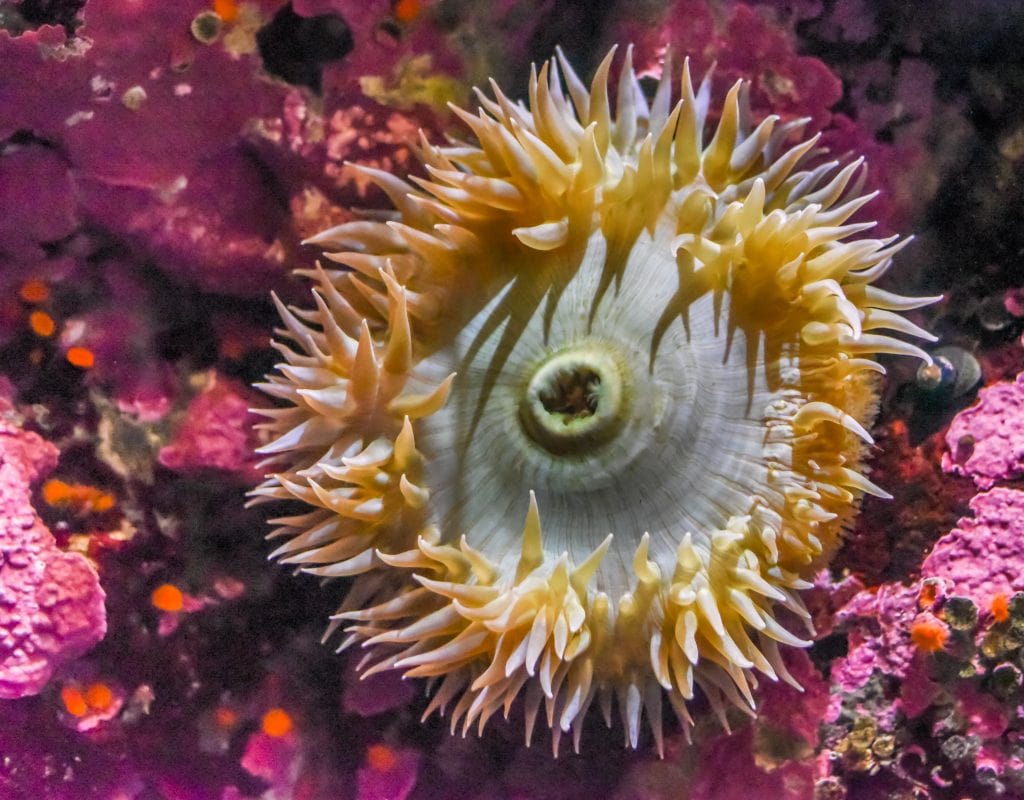 There are all sorts of bad algae–hair, slime, turf–and they are widely recognized by aquarists as a manifest sign of poor water quality. On the other hand, a healthy growth of calcareous algae is regarded as desirable. Calcareous forms are slow-growing yet they compete for space with (and thereby suppress) all the ugly bad forms. Some release chemicals that promote the settlement of certain invertebrate larvae. And, many of them can be quite attractive.

Brown (phaeophyte), green (chlorophyte) and red (rhodophyte) algae each have calcareous representatives. However, there are relatively few calcareous brown algae. There are a good number of calcareous greens, and some of these (e.g. Halimeda) are fairly important in reef building processes. But it is the calcareous reds–the coralline algae–that are arguably the most speciose, are most widely distributed and are indeed the most productive reef builders.

Coralline algae make up the order Corallinales. Corallinales is divided into two big families on the basis of reproductive structures. Though the corallines belong to the “red” algae, they are (depending upon species) variously colored in pastel pinks, purples, reds, greens, oranges and sometimes even blues.

These algae form a thallus (i.e. algal body) that is hardened with calcareous deposits from within the cell walls. Just a few species live unattached, forming smooth little spheres called rhodoliths. Attached forms are classified as either geniculate (articulated) or nongeniculate (crustose/nodular). Geniculate types usually look something like rows of small coins connected by thin joints, whereas nongeniculate types are pretty much low-growing, amorphous crusts. Though the nongeniculate corallines all kind of look the same at a glance, they are the most diverse group (over 1,600 described species!).

Aquarists are most familiar with species from the family Corallinaceae. This is the largest family of the order. It is divided into two subfamilies on the basis of growth form; Corallinoideae comprises the geniculate corallines, while Melobesioideae comprises the nongeniculate corallines. The Corallinaceae are typically very calcified and bear reproductive organs in concepticles that open to the exterior through one or more pores. Though pretty much all corallines can reproduce asexually through fragmentation, they are dioecious with distinct differences between male and female conceptacles.

Reef aquarists prize live rock that is covered in coralline algae, particularly if it is colonized by numerous, differently colored, species. Often, hobbyists pay a premium price for rock that is already well-covered in corallines. However, these beautiful algae can disappear rather quickly if water conditions are poor. So, what constitutes poor water quality for a coralline alga? Just about all the same things that are bad for coral. Even high nutrients. So, why would an alga not like high nutrients? It’s not so much that they don’t; it’s just that under nutrient-rich conditions, they get outcompeted by faster-growing diatoms and green algae.

Old, spent water is bad news for coralline as well. This water tends to be depleted in all the things these algae need most: Calcium, carbonates and trace elements. Crappy water also typically has a low pH value, which 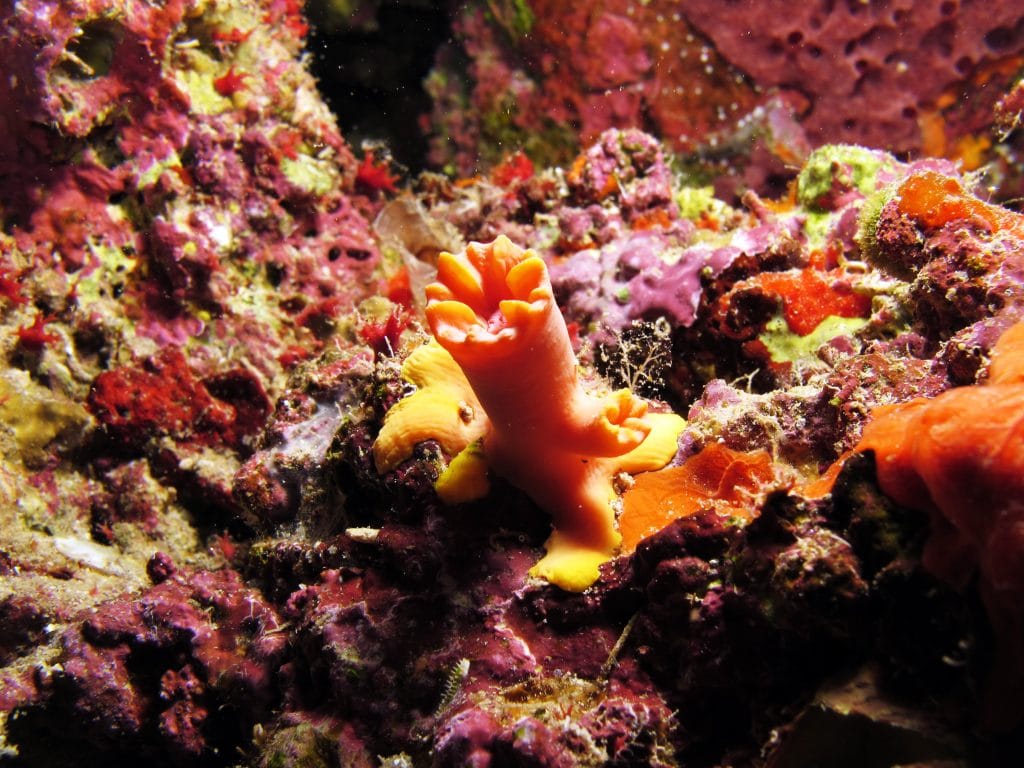 inhibits calcification. This is why those who frequently perform large water changes are so often rewarded with prolific coralline growth.

In order to best promote coralline algae, one must meticulously maintain water parameters as follows:

Of course, being algae, corallines additionally require light to survive. Many of the Corallinaceae are adapted to low-light areas such as deeper, sublittoral bottoms or shady areas beneath benthic invertebrates such as corals. This is less a chromatic (i.e. spectral) adaptation than it is an ability to conserve metabolic energy through low rates of respiration and growth. Thus, they may be found anywhere from the intertidal zone to 1,000 feet depth. In reef aquaria, moderately bright to very bright light on a naturalistic photoperiod is recommended for best coralline growth.

Aquarists with acrylic tanks might be wondering: Why would I want to have coralline algae? Will I end up scratching my tank trying to keep it off of the panels? Thing is, if you’re tank is healthy, you will end up introducing/growing coralline of one type or another via rock, snail shells, etc. Yes, some will grow on the tank panels, as will other types of algae (some aquarists actually encourage its growth on the back panel). Fortunately, coralline grows pretty slowly, so it is easy to keep it in check. So long as you remove it during its early grow stages, it is pretty easy to avoid scratching even on the softest acrylics. Just don’t wait until you have half dollar-sized patches on the front panel before you finally decide to pull out the little white pad!

Thankfully, one may use a bottled product containing coralline algae spores to (1) speed up the seeding/establishment process and (2) promote a wide variety of coralline species (i.e. colors). For this purpose, Coralline Algae in a Bottle stands out boldly. This product was developed in a laboratory and contains coralline algae spores. While some products are nothing more than a mixture of calcium and maybe magnesium (merely supporting coralline algae growth at best), this is an actual live, multispecies product. Heavily inoculated with beneficial microbes, Coralline Algae in a Bottle is an excellent means of seeding fresh base rock.

This product is available in two choices of coralline mixes: Pink Fusion® and Purple Fusion®. The genera featured in Pink Fusion® include Goniolithon, Lithophyllum, Lithoporella, Mesophyllum, Metamastophora and Sporolithon. The genera featured in Purple Fusion® include Hydrolithon, Lithophyllum, Lithoporella, Neogoniolithon, Porolithon and Sporolithon. The two may be added together; as a combo, they produce an extremely beautiful, natural and healthy rock surface with hints of pale lavender, deep maroon, and everything in between.

So long as you already have the right water chemistry and lighting in place, there couldn’t be a simpler way to ensure that you develop the most vividly colored, natural-looking live rock as quickly as possible!