Mesozooplankton (e.g. copepods) are characterized as planktonic animals in the size range of 0.2-20 mm. They may be divided into distinct functional groups by their feeding strategies (grazers, predators or detritivores/suspension feeders). Mesozooplankton are an important food source for reef fish and benthic planktivores (including corals).

An ambitious study, recently published in the journal Progress in Oceanography, addresses the paradox of reef mesozooplankton abundance by determining:

Per data obtained in this study, content of phytoplankton and bacterioplankton in the diets of particle-feeding mesozooplankton respectively is 7–76% (average 39%) and 19–57% (average 37%). This pretty much meets summer and fall demand. However, these two food webs fall short of satisfying winter and spring food demand. This suggests that reef mesozooplankton rely on additional food sources (e.g. detritus) to supplement their diets–at least during these months. 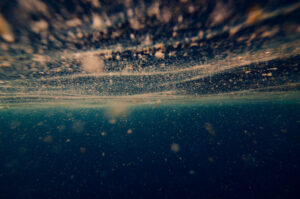 While not always very nutritious, detritus is an important food source for mesozooplankton during times of scarcity. Most of this detritus is made up fish feces and coral mucus rather than algal material. Rich in labile carbon, these types of detritus may be heavily colonized and fed upon by heterotrophic bacteria. The bacteria themselves enrich the particles as they descend through the water column, making them more nutritious for both suspension-feeding and deposit-feeding detritivores.

So let’s get this straight. Typically, as a result of low nutrient concentrations, coral reefs are deficient in phytoplankton. Indeed, much of the phytoplankton that occur on reefs actually wash in from other environments. The modest quantities of phytoplankton on reefs is rapidly consumed by the many phytoplanktivorous creatures that live there, including mesozooplankton.

Bacteria play very heavily into this arrangement. Heterotrophic bacterioplankton are known to be quite abundant in reef waters where they enjoy a rich organic carbon source in the form of discharged coral mucus. Their very small bodies (high surface-to-volume ratio) make them superior competitors against phytoplankton (including even picophytoplankton) for limited nutrient resources (e.g. nitrate); their strong presence is part of the reason that reefs are nutrient-poor in the first place.

While there are exceptions (e.g. Oithona), copepods in particular and mesozooplankton in general cannot easily consume miniscule particles like bacteria. Nevertheless, microbial productivity is important to these animals in two ways. Firstly, bacteria support large numbers of protists (which are, for example, a key dietary component of reef copepods). Secondly, they convert otherwise unwholesome detritus into wholesome morsels (e.g. marine snow). As this study demonstrates, microbial and detrital food webs are critically important in coral reef ecosystems, particularly during seasonal dips in phytoplankton production.

However, despite any proportional variance in the consumption of phytoplankton, bacterioplankton, microzooplankton or POM from season to season, it is pretty clear that all of these sources contribute significantly to the astounding abundance and diversity of live found in reef habitats. 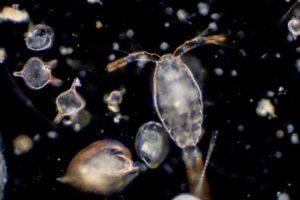 A few points are worth emphasizing here. On the surface, nutrient-deficiency (which severely limits phytoplankton productivity) may seem like an impediment for the formation of coral reefs. However, it is actually essential for reef health as it prohibits runaway benthic algae growth!

The modest density of reef phytoplankton (compared to some other marine ecosystems) does not mean that phytoplankton is unimportant in the diets of corals, mesozooplankton and other reef animals. To the contrary, it is a precious commodity for which these animals compete intensely. Phytoplankton is irreplaceable even when other food sources are abundant because it is a near-exclusive source of certain essential vitamins (e.g. vitamin C).

This is why the addition of live phytoplankton is so beneficial in reef aquaria. The best phytoplankton supplements are blends; these products are not only better balanced nutritionally but present a broader selection of (especially larger) particle sizes for mesozooplankton. Multi-species communities of pods (such as EcoPods) are best, and multi-species phyto blends (such as OceanMagik) are often the best means of feeding them.

But a more balanced diet is a better diet. That’s why the Ultimate Ecopack (which contains both live bacterioplankton and marine snow as well as pods and phyto) is your comprehensive reef food package. Not only is it nutritionally balanced but it also provides a wide variety of particle sizes!