When it comes to animal diets, there is not necessarily a close correlation between the normal amount of intake of certain components and the degree to which they are required for normal growth and metabolism. Take for example ascorbic acid (widely known as vitamin C). This compound makes up a freaking miniscule fraction of most animals’ diets, yet they will surely become ill or even die without it. Plants (including algae) can synthesize this substance on their own; however, many aquatic animals (numerous crustaceans, most fishes, etc.) are incapable of vitamin C synthesis and therefore rely on it traveling up the food chain. This makes intermediates in the food chain (such as copepods) quite important over the larger scale of food webs.

While the nutritional importance of vitamin C is widely recognized, few aquarists consider it much when developing a feeding regimen for their captive animals. This article serves as an overview of ascorbic acid and tosses out some suggestions for ensuring that it is present in your animals’ diets. 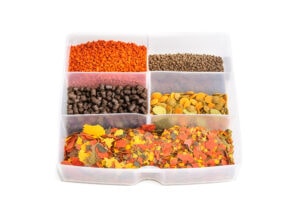 Most organisms require ascorbic acid for reason or another. This vitamin is involved in a wide variety of metabolic processes. It is an antioxidant. It aids in detoxification. It improves iron absorption. And, it promotes healthy bone growth. In crustaceans (which have a considerable ascorbic acid requirement), vitamin C deficiency is associated with complications during molting, improper collagen growth and darkened lesions over the exoskeleton. In fish, deficiency is associated with poor skin health, scoliosis and an overall lack of fitness.

Deficiencies can easily occur in captivity where captive diets are too often geared towards lower cost and greater convenience rather than nutritional content. Even where some foods might have some vitamin C content to begin with, it can be rapidly lost as it degraded by various actors during processing, storage and handling. These actors include moisture, oxygen, heat and even light. Exposure to any of these can render ascorbic acid into a number of biologically inactive substances. Thus, the ascorbic acid content listed in the “guaranteed analysis” portion of the ingredients section on a product label does not necessarily add up in the product itself.

One thing some aquarists do to compensate for the rapid degradation of this vitamin is simply add some extra quantity. Sure, because animals cannot store vitamin C, any excess is lost as waste. But, fortunately, it is pretty hard to overdose on it. Perhaps at extremely high doses it can crystalize in the kidney and cause issues. But there is for the most part a minimal risk of overdosing this vitamin. Fishkeepers are advised to include approximately 2,000 mg/kg vitamin C in fish feed. Shrimp farmers use a bit more, often using it at a rate of approximately 2,500 mg/kg.

Curious and adventurous individuals have experimented with adding vitamin C to the water. The vitamin was once believed by some aquarists to be a cure for head and lateral line erosion and was even added directly to the aquarium water in an effort to effect a cure for the malady; however, as it turns out, the effect this treatment had was seriously reducing the system’s pH. On the hand, one study demonstrated that brine shrimp are somehow capable of taking up ascorbic acid directly from the water. 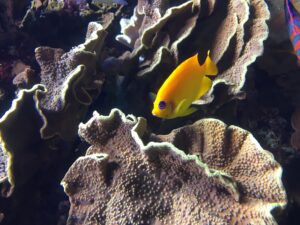 Since true plants aren’t abundant in most marine habitats, it is algae (both microalgae and macroalgae) that are responsible for introducing vitamin C into marine food webs. So it’s pretty easy to see how an herbivore such as a tang would introduce ascorbic acid into its diet. But how about a fish like a mandarin that never, ever eats vegetable material? To understand this, let’s consider what mandarins do eat: Pods! Perhaps with very few exceptions, copepods all eat algae at some point of their life cycle (at least while eating phyto as planktonic larvae). Generally, copepods (and certainly the copepod species we seed into our reef tanks) will happily accept microalgae throughout their entire lives. As these little crustaceans graze on phyto and benthic microalgae, they essentially fill their guts with vitamin C; microalgae is loaded with vitamin C (0.11-1.62% dry weight!). When “gut loaded” in this way, they ultimately become a source of vitamin C for the mandarin.

The dietary importance of vitamin C, as well as its high susceptibility for degradation, make it a very good idea to add it via live sources. For your larger algae-eaters such as rabbitfish, sea urchins, etc., you can use algal material that is discarded from a planted refugium. Sea lettuce and red ogo are fantastic choices of macros for this purpose. When it comes to other animals… well, it can get a little more complicated. Because it is difficult to grow phyto directly in a properly filtered aquarium, aquarists often need to add phyto (such as OceanMagik). This phyto (and the vitamin C contained therein) is consumed in different ways. Corals, sponges, tube worms and other filter-feeders can consume it directly. Same with copepod larvae. But it is adult copepods that, through grazing of benthic algae, transfer the vitamin up the food chain.

It can get into the tank’s food web through multiple means; what’s important in the end is that your animals all have the intake they require how regular growth and development, as well as to resist ailments. While it is always wise to keep close tabs on our lighting, water quality, etc., it might also be a good idea to ensure our creatures are provided with ample vitamin C through quality prepared foods and (better yet) through fresh live algal-based foods.