You are here: Home / Clean Up Crew / An Overview of the Sand-Sifting Nassarius Snails

We all want our reef aquaria to have a clean appearance; after all, not only does good aquarium hygiene make for a more attractive display, but the coral reef environments that we are attempting to recreate are similarly nutrient and detritus-free. This is not always an easy task for the home aquarist to accomplish, however, as particulate organic matter (POM) tends to accumulate rapidly in our small recirculating aquarium systems. Uneaten fish food, dead plant matter, tiny animal carcasses and shed exoskeletons, feces and other solid organic wastes continually build-up and break down into that familiar but unwelcome grey sludge.

While some of this material is removed by diligent mechanical filtration maintenance and water exchange, much of it remains trapped in tiny pockets under rocks and within the substrate. That which penetrates into the deeper parts of the substrate can be consumed by anaerobic bacteria, which then release toxic byproducts such as hydrogen sulfide into the system.

Much of this can be prevented with the use of sand-sifting organisms. These creatures (referred to as infaunal) move through, and often feed in, the substrate. Their slow movement through the sediments gently stirs and oxygenates the substrate, thereby reducing the amount of anaerobic space in the sand bed. Those sand-dwellers that feed on organic wastes in the sediments additionally help to curb the rate of anaerobic decomposition in a closed system by limiting stores of particulate organic matter.

As such, infaunal scavengers and detritivores are a vital component of any marine aquarium clean-up crew. Mud snails (or dog whelks) of the genus Nassarius fulfill this role quite well. Nassarius generally does not feed on algae; nevertheless, this tiny snail performs a big clean-up job on tank bottoms by constantly burrowing into and out of the substrate surface (i.e. sand-sifting) as it feeds heavily on settled particulate organic matter (i.e. reducing microbial decomposition). It is not picky in this regard, and will greedily consume anything from detritus to decaying animal flesh.

For many aquarists, they also add a little bit of amusement and interest at mealtime. When not foraging, Nassarius spends its time buried just below the surface of the sand bed with only a long, slender siphon protruding out. These snails happen to have a sensitive and highly developed sense of smell. When the first scent of food reaches their siphons at feeding time, they simultaneously emerge from their individual resting places and race in all directions (rather quickly for a snail’s pace, really) in search of a bite. Their fast-scramble scavenging behavior certainly seems to suggest that they somehow understand that perfectly good meat just doesn’t sit lying around for very long on a coral reef. Particularly when they are kept in high densities, the foraging activities of this animal can be fairly dramatic.

Nassarius snails are adapted to a wide range of environmental conditions. This is certainly a consequence of their lifestyle in the sometimes unstable substrates of mud and sand flats along the intertidal and subtidal zones. Many different species of Nassarius snail occur on shallow, soft sea bottoms worldwide. Nassarius snails are harvested for the aquarium industry in wide-ranging locales from Mexico and the Caribbean to Indonesia. Members of the genus that are most commonly used in marine aquaria are N. distortus and N. vibex. Because of their adaptation to a tough environment, these snails usually fare quite well under normal captive conditions. 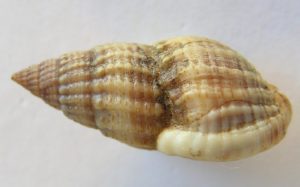 uch more than a half inch of length. Despite their small size, they have a relatively rugged shell. The shell is spiral in shape (with a nice sharp spire, in fact) with a nice rugged outer texture. Tan, beige and brown bands run along the width of the shell. Nassarius snail shells are a bit variable in texture and color pattern, but can be quite beautiful and have been used by humans as jewelry for many thousands of years. So, even though these creatures fulfill an important duty as cleaners, they can also be attractive display animals.

The best home for a Nassarius snail is a tank or refugium with a deep sand or mud bed. The best time to add these creatures to a community aquarium is after the substrate has matured and, perhaps, has acquired a build-up of entrapped organic debris. Some recommend between one and two snails per gallon of tank volume as a rule of thumb. Many keepers may be surprised by how quickly a small group of these little snails can scour a tank bottom clean. Before very long at all, they may even require a bit of supplemental feeding from time to time. At this point, the sand bed surface will no longer have a film or dirty appearance. And even though these snails do not consume algae, they still keep the sand bed surface clear of algal growth by constantly turning it over due to their constant burrowing. (For persistent issues with detritus accumulation, try a reliable sludge-eater such as live purple non-sulfur bacteria (e.g. PNS Probio™)).

Nassarius snails are legendary for their appetites. It is perhaps because of their reputed voracity that they have been blamed for sudden aquarium animal deaths. In truth, most if not all of these reports come from aquarists witnessing nothing more than a peaceful little snail dutifully eating away at the carcass of an animal that had recently died of some other cause. In actual fact, Nassarius snails have for long been among the most popular of cleaner snails. The efficiency with which they carry out their work is well-known. They are regarded by experts to be peaceful and generally harmless neighbors to their tankmates. Indeed, unlike the bumble bee snail, these snails will not harm beneficial sand-dwelling microorganisms. When kept in sufficient numbers, their ceaseless movement into and out of the sand bed will prevent substrate compaction and increase the depth of the oxygenated zone. Considering that they are rather hardy and (if you look close enough) pretty little animals, it’s hard to imagine why they would not be included in any aquarium with a sandy or muddy bottom.